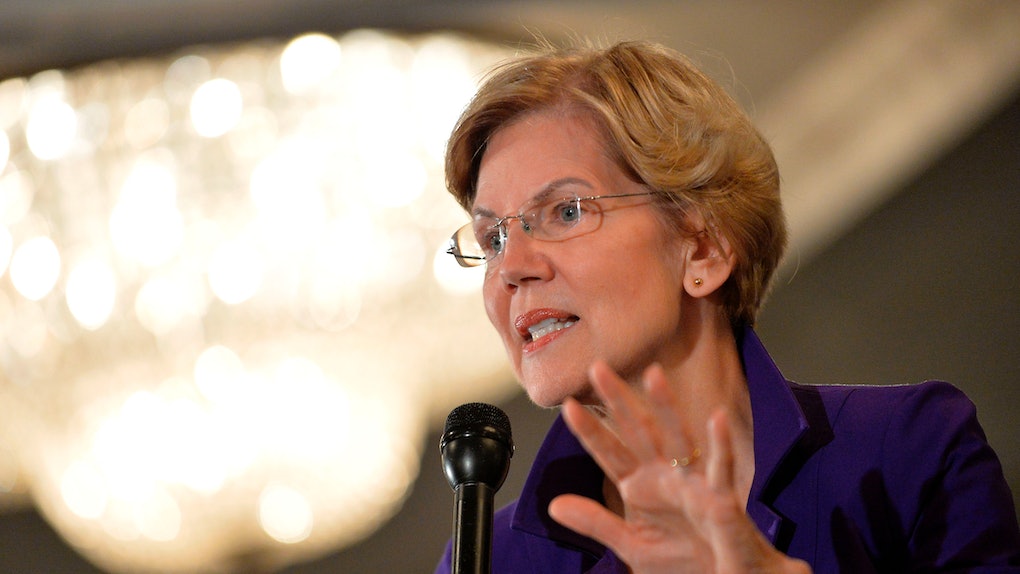 Shortly after Alexandria Ocasio-Cortez weighed in on Taylor Swift's legal battle with former manager Scott Borchetta and Scooter Braun over the rights to her old music, another Democratic politician is sharing her two cents about the situation on social media. Democratic Presidential candidate Elizabeth Warren echoed Ocasio-Cortez's sentiments when she took to Twitter on Saturday, Nov. 16, to voice her plan. Elizabeth Warren’s tweet about Taylor Swift shows she has a plan for getting her and other musicians out of similar situations, and it has everything to do with private equity firms.

If you've been following along, the "Lover" songstress took to Twitter on Thursday, Nov. 14, to ask her Swifties for help as she claimed that her former label, Big Machine, was preventing her from playing any music prior to her Lover album at the American Music Awards on Nov. 24. In addition to her performance, Swift will be presented with the Artist of the Decade award during the annual event. The "Wildest Dreams" singer also claimed that the label was trying to prohibit her from using her older hits in a Netflix documentary she is currently working on.

Since her allegations went public, a number of stars and public figures have weighed in on the drama — including Selena Gomez, Cher, Halsey, Justin Bieber, Camila Cabello, Cara Delevingne, and Alexandria Ocasio-Cortez. For their part, Braun and Borchetta have denied Swift's claims, with Big Machine issuing a statement claiming that Swift's accusations are "based on false information."

Considering that Warren has built a lot of her presidential platform on setting regulations on private equity firms and has proposed the Stop Wall Street Looting Act of 2019, it wasn't too surprising that she took to Twitter on Nov. 16 to share her thoughts on the subject.

"Unfortunately, @TaylorSwift13 is one of many whose work has been threatened by a private equity firm," she wrote. "They're gobbling up more and more of our economy, costing jobs and crushing entire industries. It's time to rein in private equity firms—and I've got a plan for that."

The plan Warren is referring to is her Stop Wall Street Looting Act of 2019, which she proposed back in July. The legislation would change the current structure of private equity and how it buys and sells businesses while also offering more protections for workers.

Also in July, Warren opened up more about her reasons for supporting an economic patriotism agenda in a Medium post, writing, "To raise wages, help small businesses, and spur economic growth, we need to shut down the Wall Street giveaways and rein in the financial industry so it stops sucking money out of the rest of the economy."

Warren's tweet comes after Ocasio-Cortez took to the social media platform to come to Swift's defense on Nov. 15 with a similar message about the danger of private equity groups.

"Private equity groups’ predatory practices actively hurt millions of Americans," she wrote. "Their leveraged buyouts have destroyed the lives of retail workers across the country, scrapping 1+ million jobs. Now they’re holding @taylorswift13’s own music hostage. They need to be reigned in."

Judging from Warren getting involved in this high-profile Taylor Swift issue, it's clear that the drama shows no signs of dying down, and I wouldn't be surprised if more public figures continue to weigh in on the situation in the coming days.