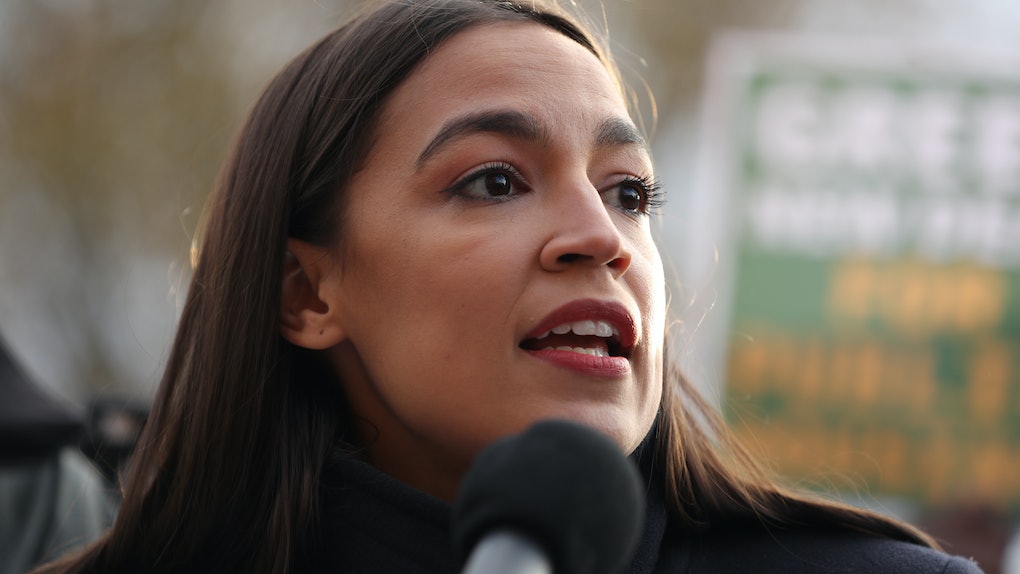 Just days after Taylor Swift opened up to the public about her legal issues with Scott Borchetta and Scooter Braun, AOC is speaking out in support of the singer. On Thursday, Nov. 14, Swift took to her Tumblr and Twitter pages to claim that her former manager and Braun were preventing her from performing her old body of work at the American Music Awards, and AOC didn't hold back when addressing the situation shortly afterwards. Alexandria Ocasio-Cortez's tweet about Taylor Swift's label issue calls attention to the "predatory" nature of private equity groups, and she doesn't mince words when coming to the "Look What You Made Me Do" singer's defense.

If you've been following along, Swift took to social media on Thursday, Nov. 14 to blast Scott Borchetta and Scooter Braun, alleging that not only were they preventing her from performing her classic songs at the AMAs, but that they'd also stalled her using the tracks from prio to her Lover album for the Netflix special she is working on.

On Friday, Nov. 15, the Democratic Congresswoman joined the chorus of public figures who'd spoken out in support of Swift, tying the issue to her progressive ideals. "Private equity groups’ predatory practices actively hurt millions of Americans," she wrote.

She continued, "Their leveraged buyouts have destroyed the lives of retail workers across the country, scrapping 1+ million jobs. Now, they’re holding Taylor Swift’s own music hostage. They need to be reigned in.”

Ocasio-Cortez is one of many well-known figures who've spoken out since Swift took to social media to claim, "Scott Borchetta and Scooter Braun have now said that I’m not allowed to perform my old songs on television because they claim that would be me re-recording my music before I’m allowed to next year."

For their part, Braun and Borchetta have denied the claims, but Swift doubled down on her allegations via a rep -- and she brought receipts.

Along with screenshots of the exchanges between herself and Big Machine Label Group, a rep told multiple news outlets, "The truth is, on October 28, 2019 at 5:17 p.m. the Vice President, Rights Management and Business Affairs from Big Machine Label Group sent Taylor Swift’s team the following: 'Please be advised that BMLG will not agree to issue licenses for existing recordings or waivers of its re-recording restrictions in connection with these two projects: The Netflix documentary and The Alibaba 'Double Eleven' event.'"

The statement continued, "To avoid an argument over rights, Taylor performed three songs off her new album Lover at the Double Eleven event as it was clear that Big Machine Label Group felt any televised performance of catalog songs violated her agreement,"

The rep then addressed claims that Big Machine had made alleging that Swift owed the label money. "In addition, yesterday Scott Borchetta, CEO and founder of Big Machine Label Group, flatly denied the request for both American Music Awards and Netflix. Please notice in Big Machine’s statement, they never actually deny either claim Taylor said last night in her post," the statement concluded. "Lastly, Big Machine is trying to deflect and make this about money by saying she owes them but, an independent, professional auditor has determined that Big Machine owes Taylor $7.9 million dollars of unpaid royalties over several years."

Ocasio-Cortez is the last to weigh in on the situation, alongside other public figures like Justin Bieber, Selena Gomez, and Halsey. Swift has yet to weigh in on the lawmaker's response, but I wouldn't be surprised if more responses pour in in the coming days.