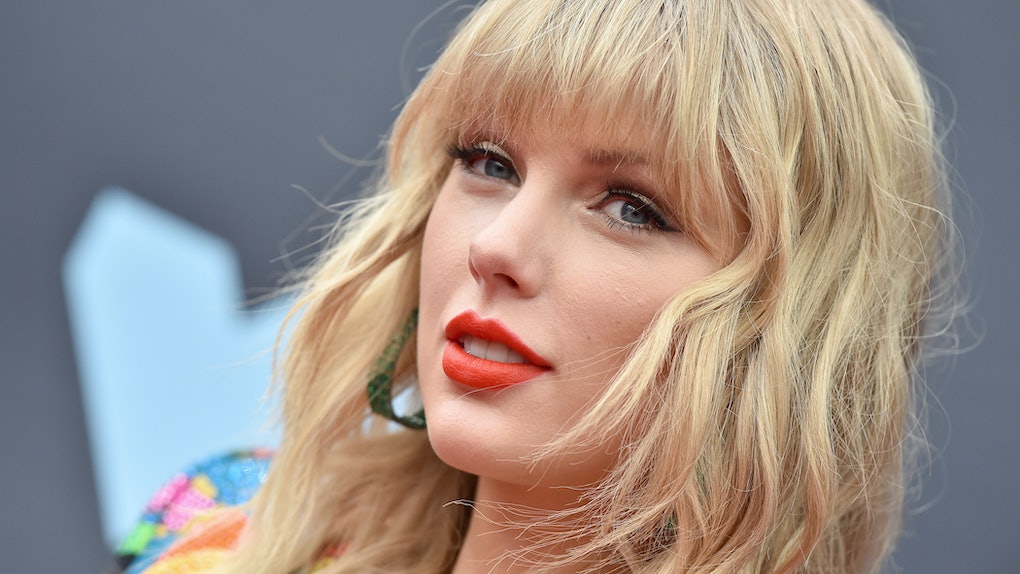 The debate surrounding the ownership of Taylor Swift's pre-Lover music catalog is heating up again. In the last few months, Swift's concerns about her old music catalog being owned by Big Machine Records took a backseat to her promotions for her new Lover album. But with an American Music Awards performance on the way, it appears she's still fighting for control of her old music behind the scenes. Swift is now accusing Scott Borchetta and Scooter Braun of preventing her from performing her old songs live at the AMAs. Swift and Big Machine Records didn't respond to Elite Daily's request for additional comment, but Taylor Swift's statement about the AMAs and her Netflix documentary says a LOT.

On Thursday, Nov. 14, Swift shared a screenshot of her statement on the issue, captioned, "Don't know what else to do." In a series of three screenshots, she asked fans and artists to help plead her case to Borchetta and Braun. She wrote,

Scott Borchetta and Scooter Braun have now said that I’m not allowed to perform my old songs on television because they claim that would be re-recording my music before I’m allowed to next year.

She went on to reveal Netflix is producing a documentary about her life, but Braun and Borchetta are preventing her from using her old music for that project as well, writing,

Scott and Scooter have declined the use of my older music or performance footage for this project even though there is no mention of either of them or Big Machine Records anywhere in the film.

Swift claims Braun and Borchetta had a list of demands in order to allow the use of her old music:

Scott Borchetta told my team that they’ll allow me to use my music only if I do these things: If I agree to not re-record copycat versions of my songs next year (which is something I’m both legally allowed to do and looking forward to) and also told my team that I need to stop talking about him and Scooter Braun.

I feel very strongly that sharing what is happening to me could change the awareness level for other artists and potentially help them avoid a similar fate. The message being sent to me is very clear. Basically, be a good little girl and shut up. Or you’ll be punished. This is WRONG. Neither of these men had a hand in the writing of those songs. They did nothing to create the relationship I have with my fans. So this is where I’m asking for your help.

Read Swift's statement in its entirety below.

Big Machine Label Group released a statement of its own denying Swift's accusations and, in turn, accused her of creating a narrative that "does not exist." The company wrote,

At no point did we say Taylor could not perform on the AMAs or block her Netflix special. In fact, we do not have the right to keep her from performing live anywhere. Since Taylor’s decision to leave Big Machine last fall, we have continued to honor all of her requests to license her catalog to third parties as she promotes her current record in which we do not financially participate.

Big Machine went on to accuse Swift of owing Big Machine Records millions of dollars. The company claimed it's been trying to find a mutually beneficial solution behind the scenes to no avail. Its statement continued:

The truth is, Taylor has admitted to contractually owing millions of dollars and multiple assets to our company, which is responsible for 120 hardworking employees who helped build her career. We have worked diligently to have a conversation about these matters with Taylor and her team to productively move forward. We started to see progress over the past two weeks and were optimistic as recently as yesterday that this may get resolved. However, despite our persistent efforts to find a private and mutually satisfactory solution, Taylor made a unilateral decision last night to enlist her fanbase in a calculated manner that greatly affects the safety of our employees and their families.

In a statement to Elite Daily, a spokeswoman for Swift claims Big Machine is misrepresenting the situation and the label owes Swift millions in royalties, not the other way around. Elite Daily reached out to Big Machine regarding this claim as well, but didn't get a response.

The truth is, on October 28, 2019 at 5:17 p.m. the Vice President, Rights Management and Business Affairs from Big Machine Label Group sent Taylor Swift’s team the following: “Please be advised that BMLG will not agree to issue licenses for existing recordings or waivers of its re-recording restrictions in connection with these two projects: The Netflix documentary and The Alibaba 'Double Eleven' event.”

To avoid an argument over rights, Taylor performed three songs off her new album Lover at the Double Eleven event as it was clear that Big Machine Label Group felt any televised performance of catalog songs violated her agreement. In addition, yesterday Scott Borchetta, CEO and founder of Big Machine Label Group, flatly denied the request for both American Music Awards and Netflix. Please notice in Big Machine’s statement, they never actually deny either claim Taylor said last night in her post.

Lastly, Big Machine is trying to deflect and make this about money by saying she owes them but, an independent, professional auditor has determined that Big Machine owes Taylor $7.9 million dollars of unpaid royalties over several years.

Following Swift's statement, the singer's fans and her celebrity supporters trended #IStandWithTaylor to show their support.

Whether Swift will actually perform a medley of her old songs at the AMAs on Nov. 24 remains to be seen.