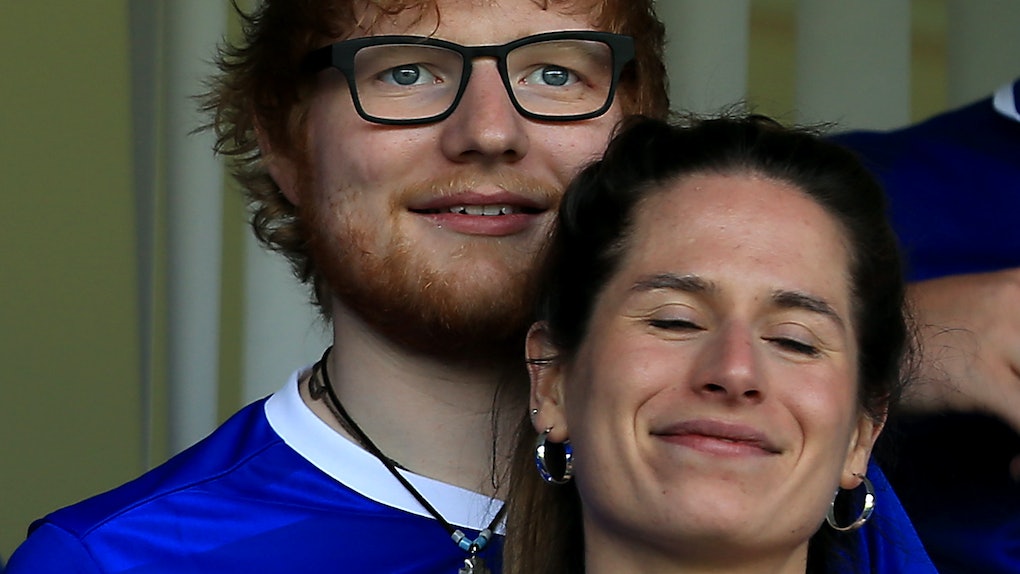 Congratulations are in order for Ed Sheeran. He and wife Cherry Seaborn have officially welcomed their first child and Sheeran's message about their newborn couldn't be sweeter. He took to Instagram on Sept. 1 to share the happy news, melting Sheerios' hearts everywhere. You might want to grab the tissues before reading Ed Sheeran's Instagram announcing Cherry Seaborn gave birth.

Sheeran's announcement post showed two blue baby socks sitting on a quilt. In his caption, he let his followers know the baby arrived in good health, before sharing her name with the world.

"Ello! A quick message from me as I have some personal news that I wanted to share with you... Last week, with the help of an amazing delivery team, Cherry gave birth to our beautiful and healthy daughter - Lyra Antarctica Seaborn Sheeran," Sheeran wrote.

"We are completely in love with her," he continued. "Both mum and baby are doing amazing and we are on cloud nine over here. We hope that you can respect our privacy at this time. Lots of love and I’ll see you when it’s time to come back, Ed x."

You can see Sheeran's announcement post about his baby below.

Sheeran didn't share a photo of baby Lyra just yet, but, then again, he's always been private about his personal life. He secretly married Seaborn in 2018, not disclosing details of their wedding until months later in July 2019.

He and Cherry also kept their baby news under wraps for almost the entirety of her pregnancy. The Sun first broke the pregnancy news on Aug. 11, just three weeks before their little one arrived. "They’re very excited, but have kept things very low key," an insider told the outlet at the time.

Sheeran expressed his desire to step back from the spotlight in December 2019 when he told fans he would be taking some time off. Seeing as Seaborn gave birth eight months later, it sounds like he was actually preparing to become a dad. Now that their little one is finally here, Sheerios can't wait to catch a glimpse of their baby girl.