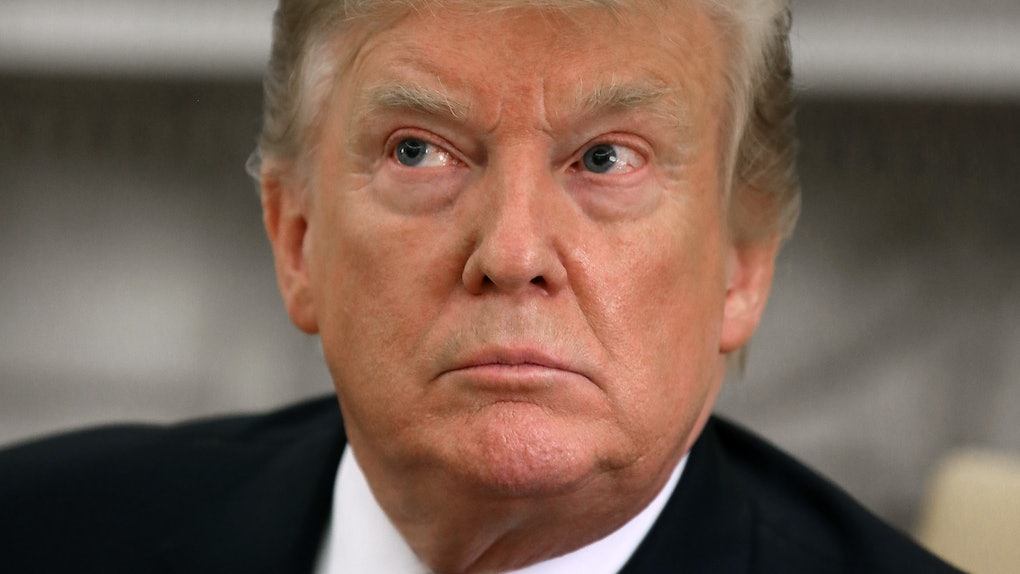 The Mueller drama continues. Following reports that Donald Trump Jr. has been subpoenaed by the Senate Intelligence Committee to testify regarding the panel's ongoing investigation into Russian interference, the president stepped in to defend his son. Donald Trump's response to Trump Jr.'s Senate subpoena called it "unfair."

According to a May 14 report from the Associated Press, Trump Jr. had agreed on two occasions to give interviews, but later backed out. Sources familiar with the conversations claimed to the AP that he had been negotiating with the committee since December and scheduled interviews for March and April, but Trump Jr. apparently changed his mind after the Mueller report concluded without charges against him. In late April, the Senate Intelligence Committee subpoenaed the younger Trump, in an attempt to get him to testify. Representatives of Trump Jr. did not respond to Elite Daily's previous request for comment regarding the subpoena.

While the Senate tries to force his hand, Trump has said he doesn't see why his son needs to testify, given that he was already interviewed by the panel in 2017. While speaking to reporters on Tuesday at the White House before traveling to Louisiana, the president also expressed that he isn't happy with the way his son is being treated.

“It’s really a tough situation because my son spent, I guess, over 20 hours testifying about something that Mueller said was 100% OK and now they want him to testify again,” said Trump. “I don’t know why. I have no idea why. But it seems very unfair to me.”

The Associated Press notes, though, that the committee reportedly wants to follow up with Trump Jr. based on new information. Back in February, the president's former lawyer and fixer Michael Cohen claimed to Congress that he met with Trump Jr. approximately 10 times to brief him on plans to build a Trump Tower in Moscow ahead of the presidential election, which seems to conflict with comments Trump Jr. gave in his 2017 testimony. According to Axios, Trump Jr. said at the time that he was only "peripherally aware" of the development proposal. While the planned tower was not illegal, it proved controversial for the president, who later described the project as "very legal and very cool."

The committee also reportedly wants to talk with him about the infamous June 2016 meeting with Russians in Trump Tower. Initially, the president and his campaign said the meeting was about an adoption program for Russians, but Trump Jr. later admitted that the purpose of the sit-down was to get dirt on his father's then-presidential rival Hillary Clinton, releasing the email chain arranging the meeting.

Meanwhile, the president is facing some drama himself over the Mueller report. Although the redacted report found no collusion between Russia and the president, Mueller wrote that Trump's campaign expected to benefit from Russian meddling. The report also did not reach a conclusion on obstruction of justice, but expressly noted that it did not clear Trump of obstruction. The White House did not respond to Elite Daily's previous requests for comment on the details alleged in the report. Trump has also faced calls for impeachment, and his Attorney General William Barr, who ultimately decided to clear Trump of obstruction, could be found in contempt of Congress over his failure to release the full report. The House Judiciary Committee voted on May 8 to refer Barr to the full House for contempt, which could ultimately allow Congress to subpoena the full, unredacted report. In a statement to The New York Times, the Justice Department called the vote "politically motivated and unnecessary." But the same day, Trump invoked executive privilege, which basically gives him the right to withhold the redacted information. The White House did not immediately respond to Elite Daily's requests for comment on the use of executive privilege.

Things are getting (more) heated, friends. It's only a matter of time before things boil over.