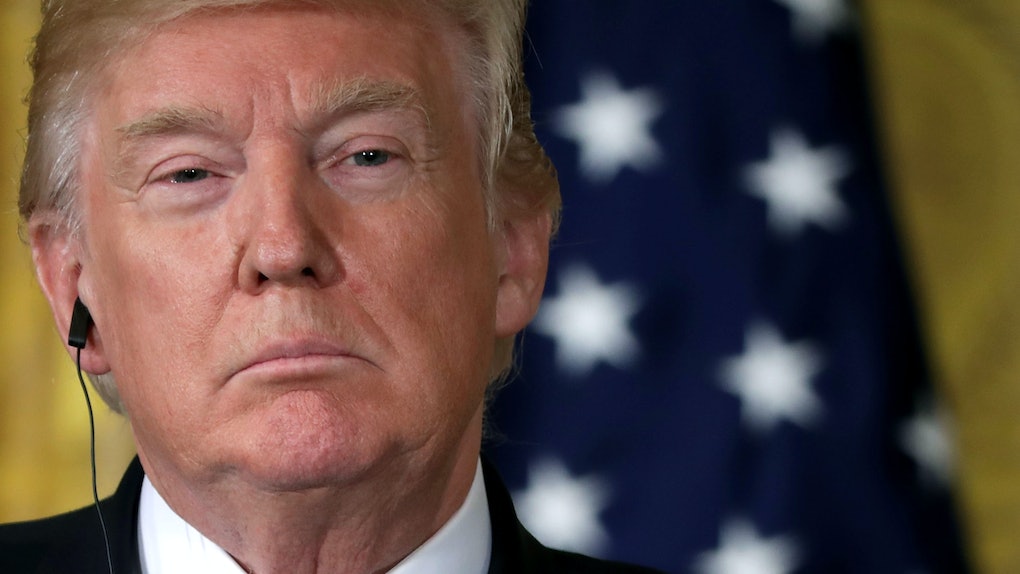 What Is Executive Privilege? Donald Trump Is Using This Power Over The Mueller Report

President Donald Trump is stepping into the fight over the full release of the Mueller report in a major way. In response to Democrats' plans to hold Attorney General William Barr in contempt for failing to turn over the full report, the president decided on May 8 to invoke executive privilege to block efforts to get an unredacted copy of the report. So what is executive privilege? It seems almost certain that this will escalate tensions between House Democrats and the Trump administration.

Simply put, executive privilege says that the president has the right to withhold information related to the White House, his aides, himself, and Cabinet agencies — even when facing a subpoena. According to Vox, it can be divided into two different categories. The first is known as “presidential communications privilege." Vox reports that this is justified by the system of separation of powers, which allows each branch of government to function without conflict from the others. The other is referred to as “deliberative process privilege,” which protects government officials from disclosure while deliberating on a course of action. The White House did not immediately return Elite Daily's request for comment on the president's use of executive privilege in the case of the Mueller report.

According to CNBC, a spokesperson for the president announced on May 8 that Trump would be asserting executive privilege over Special Counsel Robert Mueller's report on Russian meddling in the 2016 presidential election. Though the redacted report did not find any collusion between Russia and the 2016 Trump campaign, Mueller wrote that the Trump campaign expected to benefit from Russian meddling into the 2016 election. The report also did not reach a conclusion on obstruction of justice, but noted that it expressly did not exonerate the president. Elite Daily previously reached out to the White House for comment on the report, but did not hear back.

However, Barr later cleared Trump of obstruction based on the report, which raised concerns given that the report includes some alarming findings. As a result, House Democrats have called on Barr to release the full and unredacted report, but the attorney general hasn't exactly been forthcoming. Instead, the Justice Department offered a less redacted report, but Democrats want the whole thing.

So on Monday, May 6, House Judiciary Chairman Rep. Jerry Nadler (D-New York) announced that the committee would vote on Wednesday on whether to hold Barr in contempt of Congress," which could help them attain the full report. But as the vote was underway, the president's decision came in.

CNBC obtained a letter that Assistant Attorney General Stephen Boyd sent to Nadler, which says the administration was "disappointed" that the congressman would not delay the "unnecessary" vote on a contempt finding. Boyd writes that Barr simply could not comply with congressional requests to turn over the full report "without violating the law, court rules, and court orders, and without threatening the independence of the Department of Justice’s prosecutorial functions." Barr has previously stated the law prohibited him from disclosing the grand jury information included in the report. The letter continues:

Accordingly, this is to advise you that the President has asserted executive privilege over the entirety of the subpoenaed materials. As I indicated in my letter to you last night, this protective assertion of executive privilege ensures the President’s ability to make a final decision whether to assert privilege following a full review of these materials ... Regrettably, you have made this assertion necessary by your insistence upon scheduling a premature contempt vote.

Well, this just got uglier. The Mueller drama continues...