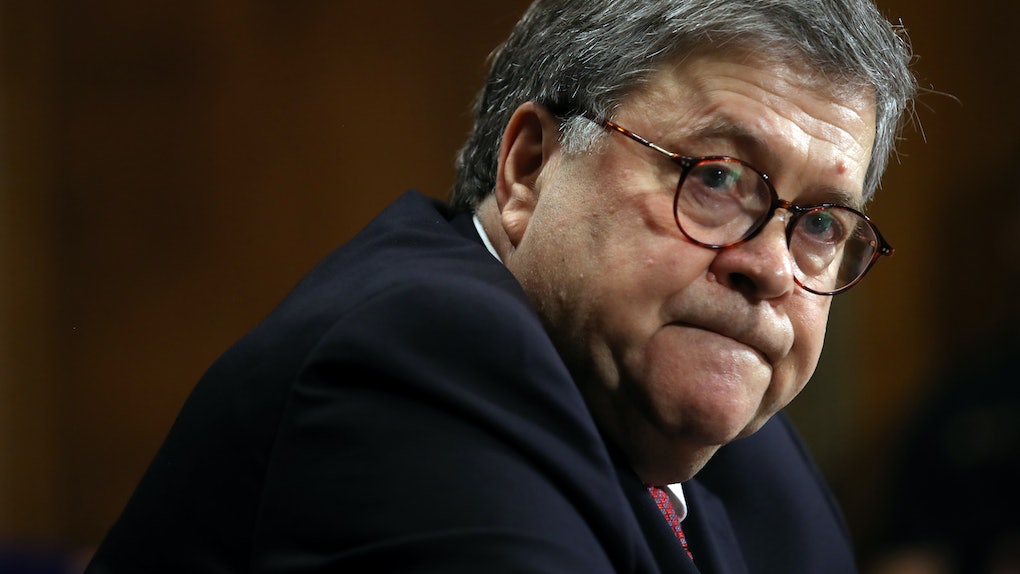 What Is Contempt Of Congress? House Democrats Are Threatening William Barr

Attorney General William Barr is facing some serious heat over the Mueller report. The attorney general reportedly hasn't been complying with congressional requests and invitations to testify over the report on the investigation into potential collusion between Russia and members of the 2016 Trump campaign, and now House Democrats are threatening to hold him in contempt of Congress. What is contempt of Congress, you ask? This sounds serious.

CNN reports that contempt of Congress is the act of obstructing the work of either Congress or a congressional committee. While there are several ways a person can be held in contempt, CNN notes that it often has to do with someone's refusal to comply with subpoenas. The Congressional Research Service told the outlet that the point of the charge is to either "coerce compliance, to punish the [person held in contempt], and/or to remove the obstruction."

So, how does Barr fit into all of this? It boils down to his handling of the Mueller report. The report found no collusion, but that doesn't mean that the president was scot-free, as Mueller wrote that the Trump campaign expected to benefit from Russian meddling into the 2016 election, and the report expressly did not clear President Donald Trump of obstruction of justice. In a summary shared on March 24, ahead of the April 18 release of the report, Barr wrote that he and Deputy Attorney General Rod Rosenstein ultimately cleared the president of obstruction, which later raised some eyebrows when the report came out. The report's findings appear to be extremely damaging to the president, with evidence that he allegedly tried to derail the investigation into his campaign, affairs, and presidency. The White House did not respond to Elite Daily's previous requests for comment on the report. But the heavily redacted report still left some major questions unanswered, prompting subpoenas for the full, unredacted documents.

Getting the report hasn't been so easy, though. On Monday, May 6, the Justice Department missed a second deadline to provide the full report. “The Department remains willing to accommodate Congress’s legitimate needs, but must do so consistent with the law," the Justice Department said in a statement to NPR on Monday. The same day, House Judiciary Committee Chairman Rep. Jerry Nadler (D-New York) announced in a statement that the committee will be voting on whether to hold Barr in contempt of Congress for failing to comply with subpoenas over the report. If the committee follows through with the threat, it would not only escalate tensions between congressional Democrats and the White House if it votes "yes," but could also have some negative effects on Barr.

The worst case scenario, according to Vox, is that he could face a fine or jail time, but the outlet notes that that "likely" won't happen. (The decision to prosecute Barr will be left to the U.S. Attorney’s Office for the District of Columbia or the Department of Justice.) Instead, he could be forced to honor congressional demands and produce the information he clearly does not want to give up. In that scenario, Democrats would have to pass a resolution to authorize going to court with Barr and the Trump administration for the Mueller report.

That may not be easy. Prominent political figures such as Senate Majority Leader Mitch McConnell (R-Kentucky) have signaled that they're willing to fight for Barr. McConnell said on Tuesday that lawmakers need to "stop endlessly re-litigating a two-and-a-half-year-old election result," per NBC News. Trump, on the other hand, has also pushed back on House Democrats, maintaining that there was no collusion or obstruction. "ALL THE CRIMES ARE ON THE OTHER SIDE, and that’s what the Dems should be looking at, but they won’t," he tweeted on May 6.

Hopefully, Wednesday will bring some answers.