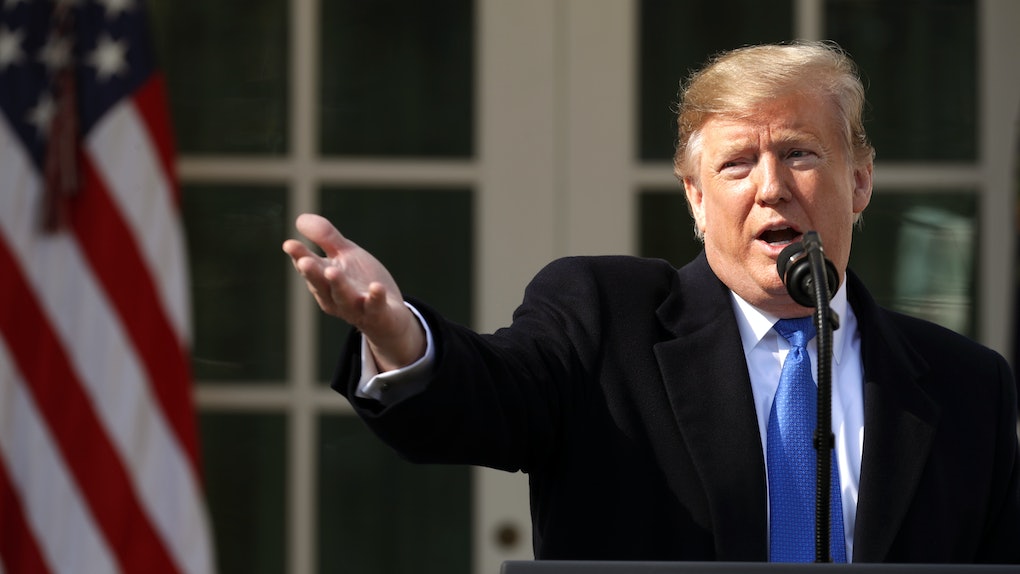 Donald Trump's Response To The Aurora, Illinois Shooting Is Missing One Thing

After a gunman opened fire at an Illinois-based manufacturing plant on Friday, Feb. 15, killing five people and injuring five law enforcement officers, per CNN, President Donald Trump addressed the tragedy on Twitter. Falling one day after the anniversary of the Parkland school massacre, Donald Trump's response to the Aurora, Illinois shooting failed to mention one crucial element as he shared his condolences and applauded law enforcement. The White House did not immediately reply to Elite Daily's further request for comment on President Trump's tweet.

On Friday, per reports from CNN, an employee at the Henry Pratt Company who was being let go started firing at his co-workers with a Smith & Wesson handgun, according to Aurora, Illinois' Chief of Police Kristen Ziman. Five employees were killed during the attack, and five Aurora police officers and one employee were also taken to the hospital for injuries sustained during the shooting, per The New York Times. About 90 minutes into the attack, the gunman was reportedly killed by law enforcement after he fired upon them, according to the publication.

The tragedy was only made harder by the fact that the country had just mourned the one year anniversary of the Parkland, Florida school massacre, which took the lives of seventeen students and staff members and injured many others, one day earlier on Feb. 14.

President Trump took to Twitter in light of the Aurora, Illinois attack, applauding the town's police force and sharing his sympathies.

Great job by law enforcement in Aurora, Illinois. Heartfelt condolences to all of the victims and their families. America is with you!

However heartfelt his condolences were, the president's message failed to acknowledge one thing: That the victims were killed during a shooting. Elite Daily reached out to the White House for further comment on why President Trump's tweet didn't specifically mention the shooting, but did not hear back at the time of publication. His tweet, which mirrored his responses to the Pittsburgh Synagogue shooting in October as well as the Santa Fe school shooting in May, continued to highlight his track record of straying away from talking about gun control in the wake of mass shootings.

Citizens and fellow politicians alike are calling out the president for omitting the fact the deadly attack was a shooting in his message, while others are pushing once again for gun control reform.

Gabrielle Giffords, former House Representative of Arizona's 8th District and survivor of a 2011 assassination attempt in Tuscan, took to Twitter to share her thoughts about a "president who still refuses to acknowledge a real crisis when he sees one."

New Jersey Governor Phil Murphy shared his condolences in a tweet, writing that he and his wife, Tammy, were "heartbroken" by the incident, and he also called for government action concerning the "tragic epidemic of gun violence in this country."

One year ago, President Trump appeared to briefly consider taking legislative action after the deadly Parkland high school shooting. On Feb. 22, 2018, he wrote on Twitter:

I will be strongly pushing Comprehensive Background Checks with an emphasis on Mental Health. Raise age to 21 and end sale of Bump Stocks! Congress is in a mood to finally do something on this issue - I hope!

However, the president soon backtracked on his statement.

After eight people were killed and many others were injured after a gunman opened fire at the Tree of Life Synagogue in Pittsburgh in October, he skirted around the issue by pushing for harsher death penalty laws for shooters. In addition, he reportedly told reporters, "If there was an armed guard inside the temple, they would have been able to stop him." Elite Daily reached out to the White House for further comment on President Trump's remarks at the time, but did not hear back at the time of publication.

In perhaps his most telling move of all, on Thursday, Feb. 14, President Trump reportedly changed the wording of a White House condolence statement from "gun violence" to "school violence" when he re-shared it on Twitter one year later, per the The Washington Post. Elite Daily reached out the White House for comment on the report, but did not hear back at the time of publication. Again, he failed to mention that the "loss of life" was due to gun violence.

The Aurora, Illinois shooting is the latest addition to the 38 mass shootings that have happened so far in 2019, per the Gun Violence Archive. Meanwhile, 2018 offers an even grimmer statistic: At the time of the Thousand Oaks shooting in November, there had been 307 shootings in 311 days, per USA Today.

However, judging from the president's response to the most recent tragedy, it seems unlikely that he plans to shift his narrative to take action on reforming gun laws in the United States anytime soon.