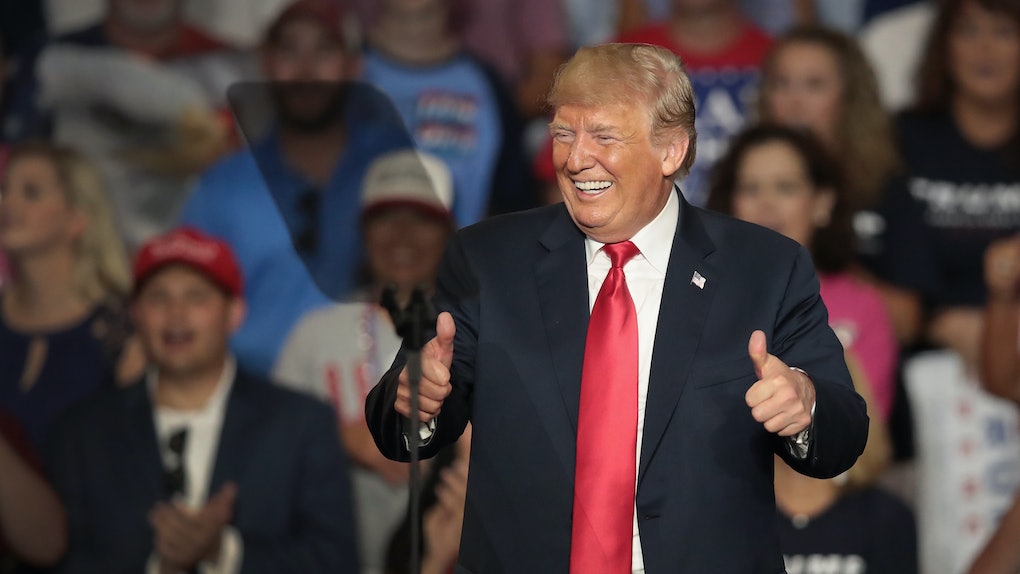 Throughout his presidency, Donald Trump has certainly rubbed a few people the wrong way. He's sparked heated criticism from numerous politicians and citizens alike, but Donald Trump's comment about his relationship with Rod Rosenstein is a head scratcher. Before you know it Trump will be tweeting #bffgoals.

On Aug. 8, Donald Trump spoke to The Wall Street Journal about his relationship with Deputy Attorney General Rod Rosenstein. During the interview, Trump claimed that he and Rosenstein have a "fantastic" relationship. Hm.

“It’s fantastic,” Trump told The Wall Street Journal. “We have a great relationship. Make sure you tell them that.”

Trump's comments are quite a different take compared to past thoughts he's openly shared about Rosenstein. In May 2017, Rosenstein appointed Special Counsel Robert Mueller to lead the investigation into Russian election meddling and possible collusion, after Attorney General Jeff Sessions recused himself from the investigation. Mueller's appointment followed Trump's firing of FBI Director James Comey on May 9 of that year, made more controversial since Rosenstein wrote the memo explaining the president's decision to fire Comey. Since then, Trump has publicly gone on the attack against his own deputy attorney general, taking to Twitter on a few occasions to publicly criticize Rosenstein and the so-called "witch hunt."

In fact, only a few weeks after Mueller's appointment, in June of 2017, Trump tweeted, "I am being investigated for firing the FBI Director by the man who told me to fire the FBI Director! Witch Hunt."

According to The Wall Street Journal, Rosenstein reportedly calls Trump on the phone "two or three times a week," and gives regular updates about Mueller's investigation, but it doesn't look like that's helped their relationship — as recently as April 2018, the president was still tweeting out shots at Rosenstein.

But while concerned citizens and passionate activists have called for the impeachment of Donald Trump, it looks like Rosenstein is also under the threat of impeachment — and weirdly enough, it's thanks to the investigation into possible collusion between the Trump presidential campaign and Russia.

On July 25, Republican lawmakers, including members of the conservative House Freedom Caucus North Carolina Rep. Mark Meadows and Ohio Rep. Jim Jordan, filed articles of impeachment against Rosenstein over his management of the Russia investigation and investigations into Hillary Clinton. The impeachment articles claimed that the deputy attorney general and Department of Justice (DOJ) have hidden information from Congress and were "defying multiple Congressional subpoenas." The DOJ has said that it has been complying with the subpoenas and has been turning over documents.

However, the articles of impeachment look unlikely to go anywhere, at least for the moment. The lawmakers didn't opt to file for a a fast-track process, which would have forced the entire House to vote within two days, meaning that any vote will have to wait until after the House comes back from its summer break. Moreover, senior Republican leadership in the House seems pretty unenthusiastic about the whole thing, with Republican Rep. Trey Gowdy of South Carolina, the chair of the House Oversight Committee, insinuating the whole thing was "drama." However, nothing has been finalized as of yet.

I'm not sure if I truly buy Trump's newfound affection for Rosenstein, but it sure makes for an interesting turn of events. If I were Trump, I'd cling to any "friendship" I can get my hands on. After all, it can't be easy making friends when you're hanging out in the White House (or Mar-a-Lago) all day.