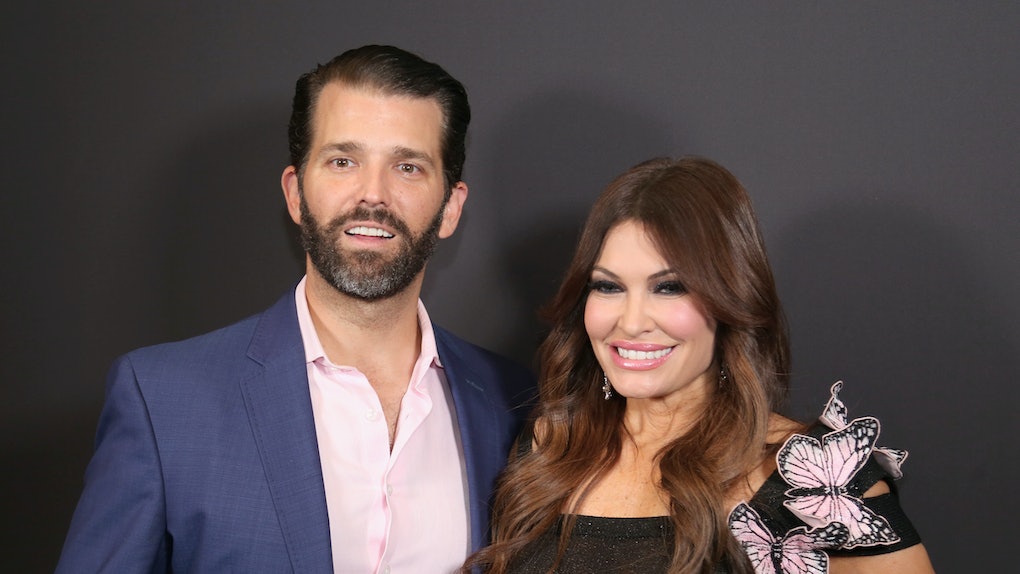 If there's one thing you can count on even in 2019, it's that Valentine's Day will still come knocking. Every Feb. 14 the world puts on some rose-tinted shades, stuffs all your favorite treats in hearts, and fills up pricey restaurants all over town. Now you might think that all the hoopla is only exemplified among A-listers or members of the first family (not sure what letter list those go on), but that's not the case for our eldest Trump son. Donald Trump Jr. and Kimberly Guilfoyle's Valentine's Day plans are keeping it low key. Way to be caj, Jr.

During a Feb. 14 interview with Page Six at New York Fashion Week, Trump Jr. gushed over girlfriend Guilfoyle's fishing skills. “She’s actually doing quite well [at fishing],” Trump Jr. said. "She’s caught a bunch of saltwater stuff and doing pretty well in the trout stream as well." But when asked to dish on his Valentine's plans with Guilfoyle, Trump Jr. admitted he's "more of a fisherman than a romantic." Yet, their V-Day plans are going to be sans fishing rods. The eldest Trump son said that both he and Guilfoyle will be "traveling a lot" over the next few weeks and so for Valentine's Day they're just planning to have a quiet dinner and "hang out." Trump Jr. said,

We’re just going to hang out. We’re all traveling a lot over the coming weeks so we’re going to do a nice calm thing, just the two of us.

Elite Daily reached out to the Trump Organization for further comment, but did not immediately hear back.

It's apparently the first Valentine's Day for the pair after Trump Jr. and his wife Vanessa Trump split up in March after 12 years of marriage. In a joint statement to Elite Daily at the time, the couple said,

A few months later, Page Six reported that the first son and Guilfoyle were seen out and about together, and they arrived at a party together for President Donald Trump’s new ambassador to Germany, Richard Grenell. Also, a source also told the publication in May that Trump Jr. and Guilfoyle are definitely seeing each other. The source said,

Don Jr. and Kimberly are seeing each other, and are having a great time. While he wants to respect the privacy of his family, he is getting divorced, and he enjoys Kimberly’s company.

Regardless of the rumor mill heating up, neither Trump Jr. or Guilfoyle had confirmed the relationship — but Vanessa did it for them. Some folks weren't too thrilled at the prospect of Trump Jr. and Guilfoyle dating because she worked as a host for Fox News, and many were worried that she was reporting on the Trump family while they were allegedly dating off-air. But Vanessa came to her defense in June 2018 after The New York Daily News published a scathing piece calling for Fox to fire Guilfoyle — and basically confirmed the relationship in the process. In a June 14, 2018 tweet, Vanessa basically told everyone to back off of Guilfoyle. She wrote,

The lengths people will go to attack a woman simply because she’s dating Don. We’ve been separated for over 9 months and respect each other’s decisions & privacy. We’ll focus on raising our great kids.Would be nice if the press did the same rather than obsess over our pvt lives!

A few weeks later, the couple made it Insta official when Guilfoyle posted some cuddly pics of the two of them fishing in Montana.

Let's not fuss over who gets credit for bursting the bubble, though. Trump and Guilfoyle are out in the open now. Fishing and all.