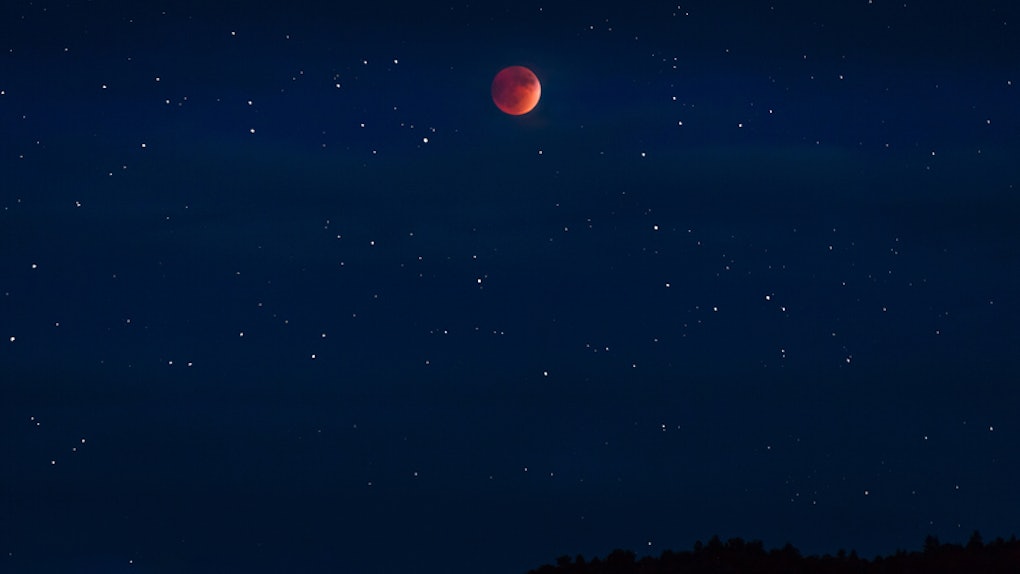 Does The Lunar Eclipse Affect Sleep? 6 Ways To Make Sure You Snooze Through The Night

The blood moon — aka a total lunar eclipse — is coming up on Jan. 31, which means we only have a few more weeks until we see that glowing red orb up in the sky. I don't know about you, but I'm pretty excited for this rare and awesome lunar event, so much so that it's kind of keeping me up at night. Speaking of, I have to wonder, does the lunar eclipse affect sleep patterns? While it seems there might not be a totally logical connection between the state of the moon and the state of your slumber, it turns out this spectacular sight has more of an effect than you might realize.

Research shows that, during a full moon (side note: a lunar eclipse can only happen on a full moon), people sleep, on average, 20 minutes less than they usually do. According to CNN, a study led by researchers at the Psychiatric Hospital of the University of Basel in Switzerland asked 33 people between the ages of 20 and 74 to sleep in a lab with no windows and temperature-controlled conditions. The moon wasn't visible to them, and they had no knowledge that the experiment had anything to do with lunar phases. They spent a total of three and a half days inside that lab.

While it was a pretty small study, the findings were super cool, if you ask me. Basically, it took, on average, five minutes longer for the volunteers in the study to fall asleep during a full moon compared to their sleep patterns during a new moon. The volunteers' measures of deep sleep also decreased during the full moon by about 30 percent, and they produced less melatonin (aka your sleep hormone) during that time as well.

Keep in mind, the upcoming blood moon on Jan. 31 is not only a full moon, it's a supermoon and a blue moon — which may just make it extra powerful in terms of its effects on you. So, here are some tips to make sure you don't lose any shut-eye under the crimson light of this special moon.

1. Do Something Super Relaxing Before Bed

Whether you book a cheap massage for that evening, or take a hot bath with some soothing epsom salts, or even just pet your cat for a half hour with your eyes closed, do something that gives your body extra time to really, really wind down.

2. Make Sure Your Sheets Are Clean And On Point

If you ask me, if there's anything in this world worth investing in, it's good bedding. And yeah, studies actually show that people who have comfortable beds and clean rooms sleep better than those who don't.

So, before the evening of the super blue blood moon, make sure your sheets are clean, and your bed is as comfy and cozy as can be. That lunar event ain't got nothin' on you.

3. Snack On Some Foods That Promote Sleep

And, on the flip side, leave behind snacks that do the opposite, like sugar, processed foods, booze, or anything that contains caffeine.

Foods that contain melatonin, like cherries, are a great option, or you can munch on a couple bananas, which are rich in magnesium and potassium, two chemical elements that boost relaxation. A little chamomile tea certainly never hurt anyone, either.

4. Make Sure Your Bedroom Is As Dark As Can Be Come Nighttime

Seriously, do whatever it takes to make sure that crimson glow doesn't keep you up all night — blackout curtains, an eye mask, whatever it may be. It'll be easier for you to fall into a deep slumber, and you'll enjoy the best quality sleep, too, once you're fully immersed in the dark. Human sensitivity to light, and the effect it has on our circadian rhythms, is very, very real, y'all.

5. Plan A Workout That Day That Really Tires You Out

I recently did a hot high-intensity interval training class at bodē, and I cannot express how tired I was when it was all over. Seriously, I slept like a newborn puppy.

Exercise is a great way to guarantee faster, deeper sleep, and apparently, as little as one bout of anaerobic exercise can help ensure a good night's rest. The blood moon might be the perfect time to take that long run you've been dreaming about.

6. Ask The Moon To Help You Sleep

OK, maybe this one is a long shot. But hey, a lunar eclipse is said to be a wonderful time to set intentions and get rid of habits that don't serve your life anymore. So, why not let go of restless nights and set an intention to get the best night of sleep you can possibly have? It's worth a shot, don't you think?