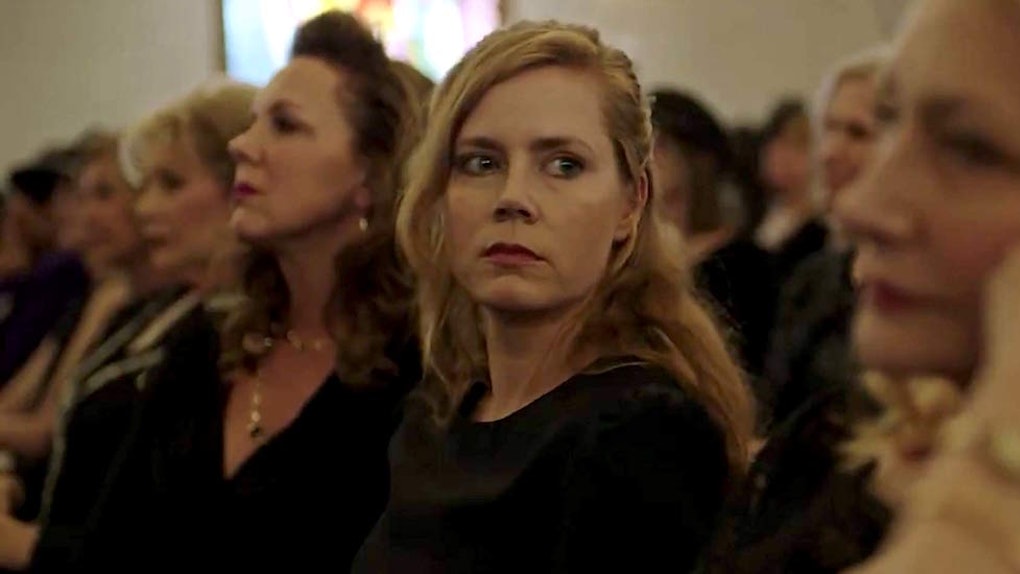 Pretty much everyone was psyched to hear that Amy Adams was returning to television at the helm of her own HBO miniseries, but the subject matter of her new series also worried quite a few viewers. Sharp Objects centers on a journalist who struggles with self-harm, causing some concerned fans to wonder: Does Sharp Objects glamorize self-harm? This question has come up more frequently about media in recent years, due largely to the popularity of Netflix's controversial teen drama 13 Reasons Why, so now, many are wondering whether Sharp Objects is accurately depicting self-harm in media.

Content warning: This post will discuss self-harm and suicide as depicted in 13 Reasons Why and Sharp Objects.

The discussion around the depiction of self-harm in Sharp Objects is largely wrapped up in the backlash Netflix's 13 Reasons Why received when it debuted last year. The first season finale of the teen series showed protagonist Hannah Baker (played by Katherine Langford) committing suicide by slowly slitting her wrists while laying in a bath tub. The scene sparked intense backlash, as did the season's dangerous message that suicide victims can affect some sort of justice from beyond the grave. A research study conducted shortly after the show's first season found that internet searches related to suicide ideation rose significantly more than searches related to suicide prevention or awareness in the weeks following the show's debut. The 13 Reasons Why team responded to this backlash by adding warning cards before episodes and releasing a statement saying that they believed the show was useful in sparking important conversations.

With all of that in mind, Sharp Objects is taking on a tricky task by attempting to focus a series on self-harm without glamorizing the practice to vulnerable viewers. Dr. Danielle Forshee, a licensed psychologist and clinical social worker, broke down what glamorizing self-harm really means:

The nature of glamorization is that there is something relatable about the actor to the life of the viewer, and the viewer may deem self-harm behavior as an adequate option in relieving their distress. The same goes for the glamorization of suicide.

Dr. Forshee says there is a way that shows can approach the topic of self-harm without glamorizing it at all:

In the event that shows are going to depict self-harm as a central topic, it is imperative that there is a significant educational component to what the function of the self-harm behavior is for the actor and that the actor is able to get adequate professional help on the show. Shows that portray self-harm should utilize this as a platform of education for those viewers who have considered self-harm.

What Dr. Forshee says is that shows basically glamorize self-harm when they present self-harm in a relatable or somehow beneficial way, and the most important thing a show about self-harm can do is to educate viewers about the affliction.

So, how does Sharp Objects stack up?

Amy Adams' character Camille Preaker certainly is not presented as a role model in the series, and her cutting only seems to bring her more pain and anguish than any sort of release, which seems to steer clear of Dr. Forshee's description of glamorization. And although the educational aspect that Dr. Forshee underlined is not as evident within Sharp Objects, HBO did make sure to include an end card after each episode that points viewers to the Substance Abuse and Mental Health Services Administration, as well as setting up a Sharp Objects website with resources for viewers struggling with mental health or substance abuse issue.

For her part, Amy Adams told Entertainment Weekly that she did a lot of research about self-harm in preparation for playing Camille. In particular, Adams said that she read the 1998 psychology book A Bright Red Scream: Self-Mutilation and the Language of Pain and learned about people's emotional releases felt with cutting. That also ties back to Dr. Forshee's point about actor's getting the proper professional help and research before portraying a self-harm storyline. In short, it seems like Sharp Objects is getting things right so far. The miniseries airs Sunday nights on HBO.

More like this
Netflix's 'Shadow And Bone' Virtual Experience Is Full Of Grishaverse Gems
By Ani Bundel
10 Quotes From Netflix's 'Enola Holmes' That Are So Freaking Relevant
By Rachel Varina
Who Is Steven In 'The Handmaid's Tale'? He's Definitely Not Mayday
By Ani Bundel
Stay up to date