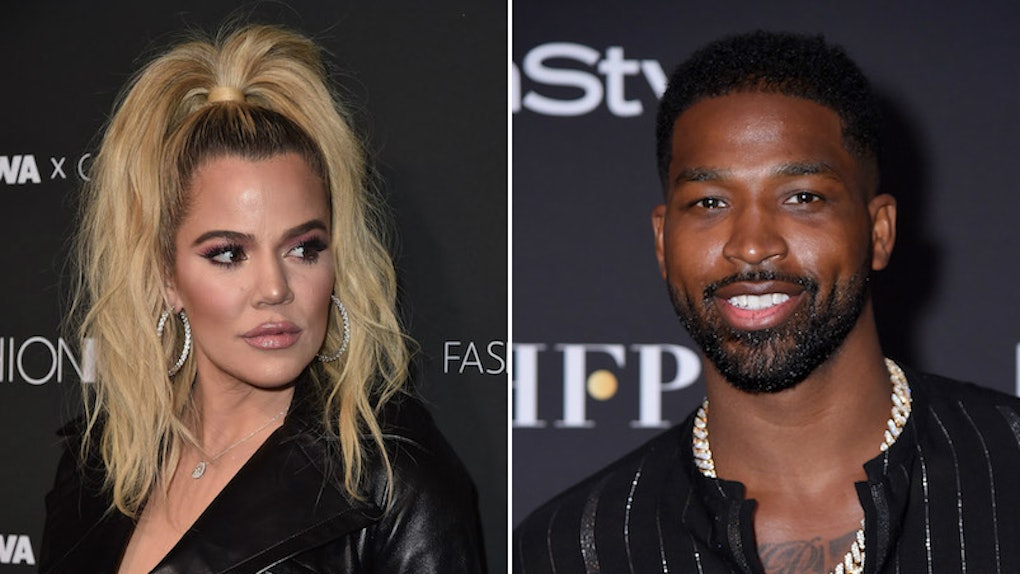 Does Khloe Kardashian Trust Tristan Thompson? The Couple May Not Be Out Of The Woods Yet

On this new episode of Keeping Up With Khloé Kardashian and Tristan Thompson, we learn that there might still be some cracks in the couple's relationship, since they've reportedly had a rocky start to 2019. Shortly after Kardashian posted some unusual quotes to her Instagram Story about how "relationships are harder now," a new report has revealed that yep, the couple still isn't quite out of the woods after Thompson's cheating scandal of 2018. With all of this uncertainty in their relationship, it begs the question: does Khloé Kardashian trust Tristan Thompson? A new report claims that Thompson is trying to regain Kardashian's trust, but it seems as though Kardashian might be taking a step back from it all. Elite Daily reached out to Kardashian's team for comment on the report, but did not hear back by the time of publication.

According to a source per Us Weekly, the Keeping Up With The Kardashians star and Cleveland Cavaliers basketball player Thompson are having a rough go of things lately.

"Tristan is trying everything he can to regain her trust," the source revealed, adding that, "Khloé is spending more time in L.A. because True has so many family members and such a support system there." The source also claimed that, while Thompson has been a great father to their daughter, True, the fact that he was caught reportedly cheating on Kardashian with multiple women while she was pregnant with True is still a recurring issue in their relationship. The source said,

Regaining Khloé’s trust is going to take time. Tristan is a great father, but it’s not yet clear if they can fully rebuild what they had. The extent of what Tristan did is still setting in. She hasn’t gotten over it yet.

To be fair, it is a lot for Kardashian to deal with. Between raising their daughter and trying to iron out the kinks in her relationship with Thompson, it has to be exhausting.

Can't even blame you, Khlo.

The source also claims that, while the pair is putting all of their focus on doing everything in True's best interest, there's no talk of marriage in the near future.

"Khloé and Tristan are really focused on doing what’s best for [daughter] True," the inside source explains. "They are not going to get engaged anytime soon. The focus right now is on whatever is best for True." Personally, I think this is the smartest idea, and hope that at the end of the day, these two can figure out whatever is in their daughter's best interest.

And about that cryptic quote that Kardashian uploaded to her Instagram Story: while it may have just been an unrelated thought, it certainly seems as though it pertained to her relationship with Thompson. It was a quote about the difficulties of relationships in the age of texting and phone calls, and how quickly jealousy can arise.

At the top, it read, "Relationships are harder now," and then explained why. Here's her post in full:

Relationships are harder now. Now because conversations became texting, arguments became phone calls, feelings became subliminal messages, sex became easy, the word "love" is used out of context, insecurities became a way of thinking, getting jealous became a habit. Trust is hard to come by, being hurt became natural & leaving became the only option. Sad but true, so if you have something that's worth it... don't take it for granted. fight for it & don't let it go.

Sigh. Here's hoping that Khloé finds happiness in whatever way she's capable of, because she totally deserves it.