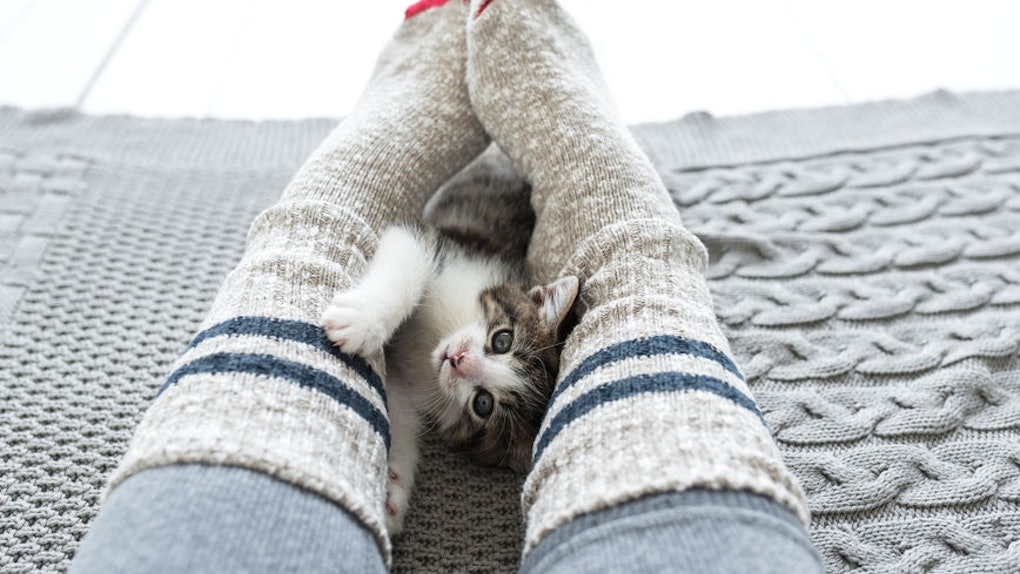 Does Having A Cat Reduce Stress? Science Says A Feline Friend Can Definitely Help You Chill

If you have a friendly feline you love dearly, the positive effects of having a kitty in the house are probably a no-brainer for you. But for those who've never had a cat or have never grown close to one, you might not know, or even buy into the fact that having a cat reduces stress levels and health risks — but seriously, it's a thing! For real, the evidence behind this is pretty compelling, so much so that you might just find yourself taking a trip to your local adoption shelter by the time you're done reading this.

Now, if you're skeptical about all of this, I get it — especially if you're "not a cat person" (I can't relate, but hey, no judgment). The idea that owning a cat can reduce your stress levels, at first blush, sounds like something your self-proclaimed-cat-lady mom would tell you over dinner, and you'd humor her because, you know, she's your mom.

But I wasn't joking when I said the evidence behind this whole thing is convincing: First of all, specifically in regards to cat owners, a 2009 study published in the Journal of Vascular and Interventional Neurology found that having a cat can — get this — reduce your risk of having a stroke or heart attack by a third. That's incredible enough to give anyone paws (see what I did there?).

In the simplest terms, the researchers on this study basically found that having a cat makes you feel less stressed overall, and they were able to prove that by measuring cat owners' heart rate and blood pressure.

According to Medical News Today, the researchers looked at data from more than 4,000 people between the ages of 30 and 75 years old over the course of 10 years. About half of the participants were either current or former cat owners, while the other half had never owned a cat at all. After analyzing the data, the researchers found that cat owners, overall, had a 30 percent lower risk of dying from a heart attack or stroke compared to people who didn't own a cat, even when accounting for factors like smoking, diabetes, heart health, and cholesterol levels.

Professor Adnan Qureshi, a researcher from the University of Minnesota who led the study, told The Telegraph that even he and his team were kind of taken aback by the numbers in their findings, too. Still, he said "the logical explanation" for their results is likely that "cat ownership relieves stress and anxiety and subsequently reduces the risk of heart disease." What's more, he told the news outlet, he believes that "stroking the pet could cut the level of stress-related hormones in the blood."

In other words, the literal, simple act of petting your cat can lower your stress levels so much that it might even protect you from long-term health issues like heart disease.

Plus, according to Chelsea Hudson, a therapist at Cityscape Counseling in Chicago, petting your cat doesn't just biologically calm your nervous system. "Simply interacting with your cat can invoke strong feelings of connection," she tells Elite Daily, "which lowers stress because intimate connection leads one to feeling less alone and better able to cope with stress."

Hudson also points out that cats are loyal creatures who provide unconditional love, and can help moderate stress levels by providing a safe escape to receive love and loyalty in spite of external stressors. "Taking care of a cat gives people a sense of purpose and also acts as a distraction to one's own problems," she explains. "Both 'finding purpose' and distraction are common stress-reduction techniques."

And, listen, while all of these positive benefits are specific to cats, if you're simply not that into the feline friends of the world, there's also research out there that demonstrates very similar advantages to having, and interacting with a dog — actually, like, eerily similar advantages: A 2017 study published in the journal Scientific Reports found that owning a dog is associated with a lower risk of cardiovascular disease. The researchers wrote that dogs may have this effect on us because they provide "social support and motivation for physical activity," which in turn leads to those tangible, long-term health effects.

In other words, if you're not too keen on getting a tabby, adopting an adorable little pug might be just as good, as far as your health is concerned, anyway.