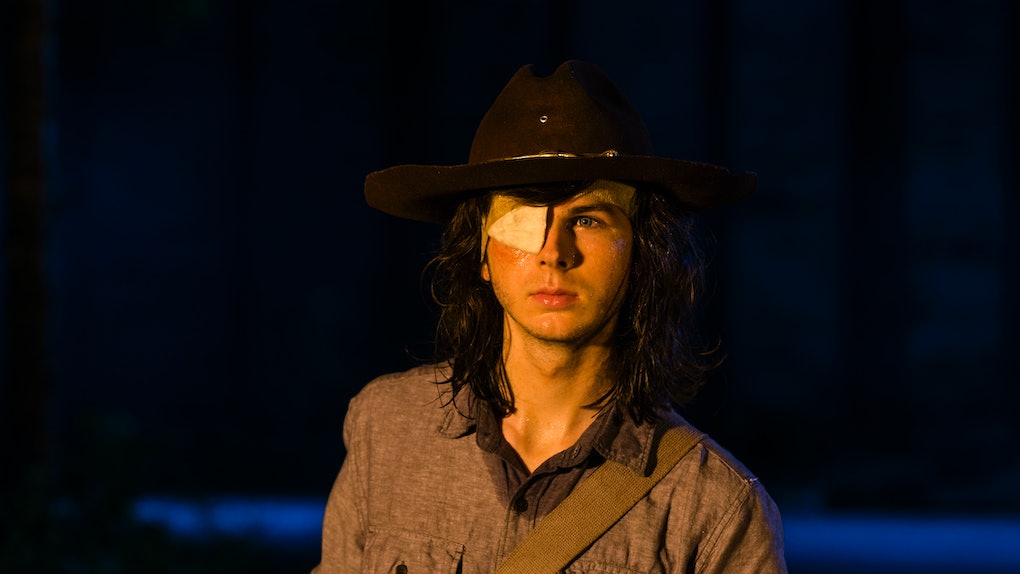 Does Carl Die In 'The Walking Dead' Comics? Maybe That Midseason Finale Wasn't So Bad After All

For a while there, it seemed like no one important would die in The Walking Dead Season 8 midseason finale. Sure, the death count was rising, but it was mostly filled with Saviors and tertiary-at-best characters (I'm looking at you, Neil). But then, in the final few seconds of Sunday night's episode, that sense of safety was ripped away as it was revealed that Carl had been bitten by a walker. So now, in an attempt to predict his fate on the show, fans need to know if Carl dies in The Walking Dead comics.

Well, I have both great and awful news. If you're looking for reassurance, don't worry, Carl does not die in the comic series that The Walking Dead is based on. Now, don't get me wrong, that's definitely a good sign. The only problem is, the AMC series isn't exactly married to the plot of Robert Kirkman's comics — even when it comes to the fates of major characters.

Take Carol, for example. In the comics, she died all the way back when the group was living in the prison. Similarly, the comic versions of Judith, Morgan, and Eugene all died well before the current events of The Walking Dead TV series. So there are no guarantees that Carl will follow the same fate as his comic book counterpart.

In fact, there are some characters still alive in The Walking Dead comics who died a while ago on the TV show. Remember Carol's daughter, Sophia? Well, she's alive and well in the comics — Maggie and Glenn adopted her after Carol's death, and Maggie is still taking care of her. Andrea also survived much longer on paper than she did on TV.

Of course, neither of those characters were as central on the AMC series as Carl is now — it's not even close. His role has only grown as The Walking Dead has continued, with the past two seasons in particular spending much more time on Carl's growth as a character separate from Rick.

Even with Carl's walker bite, it'd be shocking if The Walking Dead Season 8 returned and went so far from the comics that it killed off one of the biggest characters from either version. And if you think about it, the fact that Carl only has one small bite may be a clue in itself that he'll survive.

The Walking Dead has established that it is possible to survive a walker bite if the right actions are taken. Back in the very beginning of Season 3, Hershel was bitten on the leg and Rick amputated it before any infection could spread. Hershel then lived all the way until the Season 4 midseason finale.

Now, Carl was bit in the stomach, as he tearfully revealed to Rick and Michonne in the Season 8 midseason finale, so obviously there's no amputation that could help him. But while all of the fighting between the communities was happening, one smaller plotline also played out on Sunday night: Eugene and Father Gabriel teaming up to get the Hilltop doctor back to the community.

Their goal was to get him there so that he could help Maggie through the birth of her child, but what if all of that was foreshadowing another purpose? Maybe the doctor will know of a way to stop Carl from being infected by his bite and save him before it kills him.

After all, if The Walking Dead just wanted to flat-out kill Carl, it could've done so with a dramatic fight scene between him and a Savior, or even an intense, gruesome death-by-walker. Instead, it gave this central character — who's currently alive in the comics — a very, very small wound, and sent a doctor in his direction. There are no guarantees, but maybe the midseason premiere won't be as heartbreaking as we think.