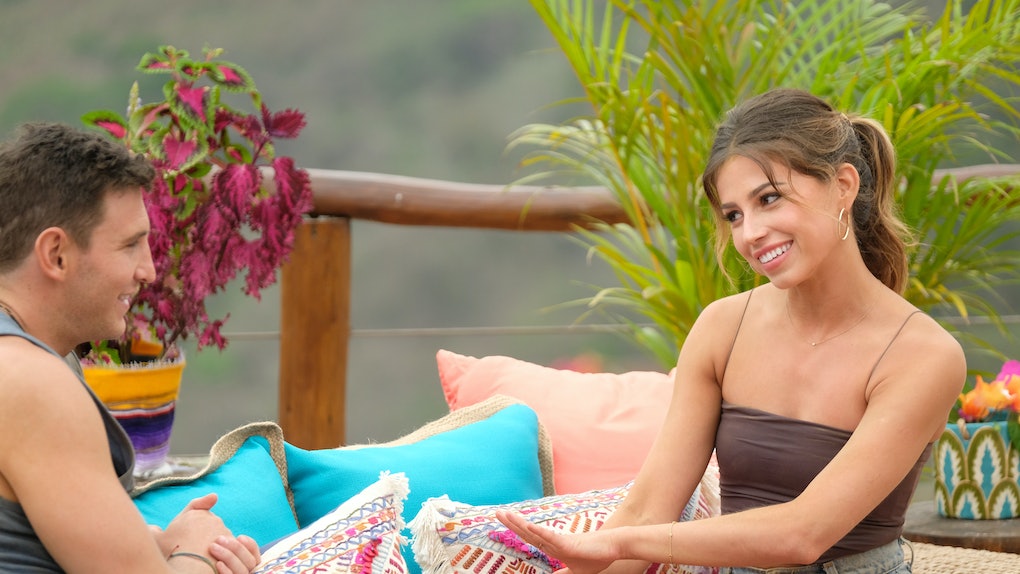 Do Blake & Kristina Get Engaged On 'Bachelor In Paradise'? Blake Said He's "All In"

So much has happened this season on Bachelor in Paradise, it's almost hard to remember when Blake Horstmann was at the center of all the drama not that long ago. When Season 6 first started, Blake was under fire for pursuing relationships with multiple women at once, including fellow contestant Kristina Schulman. That led to some pretty tense moments between Blake and Kristina during their time in Paradise, and it seemed like their romance had died out. However, in the Sept. 3 episode, Blake attempted to rekindle the spark between the two of them, which has fans asking: Do Blake and Kristina get engaged on Bachelor in Paradise? Blake said he's "all in" on their relationship.

Before Bachelor in Paradise even began, Blake had connections with both Kristina and Caelynn Miller-Keyes. He even reportedly spent back-to-back nights with each of them at the Stagecoach Music Festival this past spring. So when Kristina arrived in Paradise at the beginning of the season, she decided to use her date card to have a one-on-one with Blake about their messy relationship history. After that, Kristina asked Blake to give her a "friendship rose" during the third rose ceremony. He agreed, and then watched as Kristina pursued other contestants like Connor Saeli and Luke Stone. But in Week 5, Blake decided to chase after Kristina all over again.

Blake has been spending the last couple weeks of Paradise all alone, until, he said, he realized the person he'd been waiting for had been there all along. As he was gearing up for the fourth rose ceremony, Blake said about Kristina, "We always gravitate toward each other. Maybe what I wanted and needed was right in front of me, and it's her."

During the cocktail party, Blake asked Kristina to have a private conversation with him that was deeper than any they'd had on TV before. He told Kristina he was "all in" on their relationship and that he was scared but excited to be committed to her. He explained, "It's a good feeling because we've never been all in on each other."

Kristina told Blake she was apprehensive, since the two of them had been through so many ups and downs over the course of their relationship. "I just want clarity, because right now I'm hearing this for the first time," Kristina said.

Blake explained that he'd buried his feelings for Kristina for a long time, but he was hopeful Kristina would at least "unlock the door" to the possibility of them as a couple. "When you realize what you want and the life you want, you want it to start immediately," Blake told Kristina. "And this whole time you've been right in front of me."

It all came down to the rose ceremony that night. In giving Blake her rose, it seemed as if Kristina was agreeing to being open to the possibility of a relationship with him. They seemed pretty happy together, but that happiness was short-lived.

Blake and Kristina have a history of distrust, and history repeated itself when Bri Barnes joined everyone in Paradise. Right off the bat, she took Blake aside for a private conversation, and that sent Kristina into a tailspin over the chance that he was going to to go back on his word and start dating someone else. However, Blake proved people can change; he turned down Bri's offer to go on a date and instead returned to Kristina at the resort.

So, will Blake and Kristina last? Their history doesn't bode well for them. However, if Blake's actions with Bri are any indication, it looks like the couple might really be making a fresh start this time around. Blake and Kristina may have actually found that they've been meant to be with each other all along.