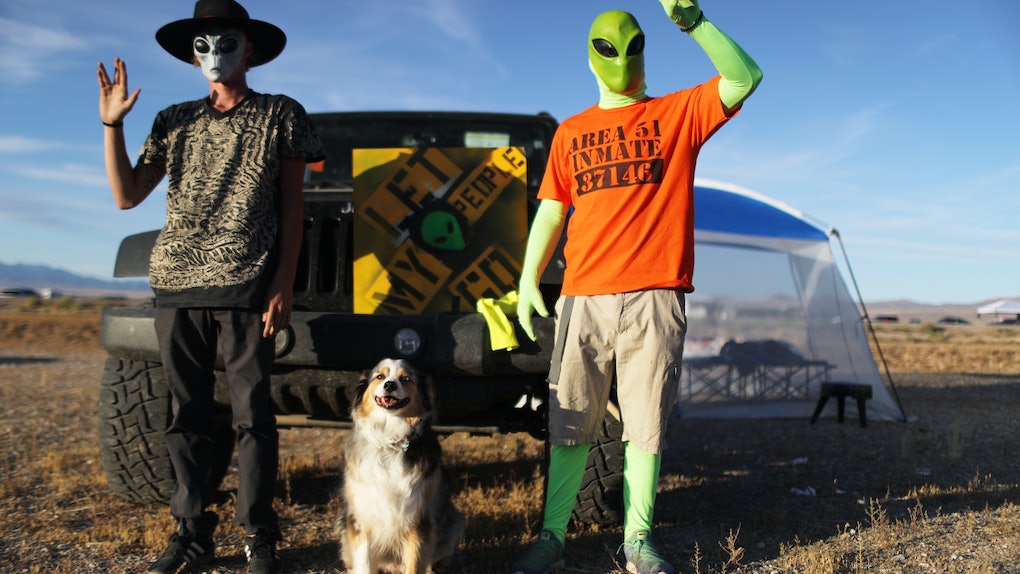 Did The Area 51 Raid Happen? Here’s What Happened In Nevada

Are you a believer? Somehow, a Facebook event that was created as a joke went viral, and it spawned into an ordeal that creator Matty Roberts never imagined would happen. If you've heard anything about the hype of the "Storm Area 51, They Can't All Stop Us" event on Facebook, you know what I mean. But now that the even's date has come, you might be wondering: Did the Area 51 raid happen? It probably isn't what you think. Here's exactly what happened in Nevada following the viral "Storm Area 51" event.

One night this summer, Matty Roberts of Bakersfield, California created a Facebook event page after "watching highlights of a Joe Rogan Experience podcast on YouTube while [he] was at work," according to an interview from USA Today. Inspired by meme events, 21-year-old Roberts decided to make the "Storm Area 51" event page, scheduling the joke invasion for Friday, Sept. 20. Eventually, this led to over 2 million R.S.V.P.s and prompted attention from government officials. In fact, Roberts was even met with questioning from the FBI. Roberts stated in the USA Today interview that the FBI's "main concerns were about anybody that was sending death threats that were actually credible and anybody that was actually trying to radicalize" the event. That's right, this joke event may have been seen as literal for some, and that's what officials were afraid of.

There was even a statement released by an Air Force spokeswoman Laura McAndrews via The Washington Post. McAndrews warned that Area 51 “... is an open training range for the U.S. Air Force, and we would discourage anyone from trying to come into the area where we train American armed forces. The U.S. Air Force always stands ready to protect America and its assets.”

Ironically, the original event page — which was taken down and later replaced — was so clearly a joke. Really, it began as the meme of all memes, saying people could "Naruto run" to storm Area 51, per Vox and other press sites that have retained the event's original description.

Out of this joke event, Alienstock — an alien-themed music fest — was scheduled. And though Matty Roberts cancelled Alienstock for fear of people's safety, people still showed up on Friday, Sept. 20.

So, what actually happened in Nevada? Well, it was a lot less of a threat than most onlookers anticipated. People did show up to Rachel, Nevada — the little town closest to Area 51, on the "Extraterrestrial Highway," aka State Route 375. Though officials were worried that some visitors really would try to storm the gate of Area 51, Lincoln County Sheriff Kerry Lee told USA Today that just one out of the 100 people that visited the Area 51 entrance gate "landed in handcuffs". And the only reason said person was put in handcuffs was because he "urinated near the gate".

If that's all that's going to happen during the "Storm Area 51" event, then nobody really has to worry about federal intervention anymore. Luckily for the small town of Rachel and its population of about 50, the turnout was a lot smaller than anticipated. Authorities, such as Lincoln County Sheriff Kerry Lee, expected much, much worse. Lee told USA Today that his "nightmare was the 30,000 people".

No, this was a peaceful gathering of alien-lovers who didn't even rush the gates. Instead, the "visitors joked with guards on the outskirts of the base" and "pleaded for 'just one little alien' to be released," per coverage of the "Storm Area 51" event from BuzzFeed. Too bad nobody got to see any proof of aliens, but it does seem like the event mellowed out to be a friendly, notable celebration that will go down in Area 51 history. As the aliens would say, "We come in peace."