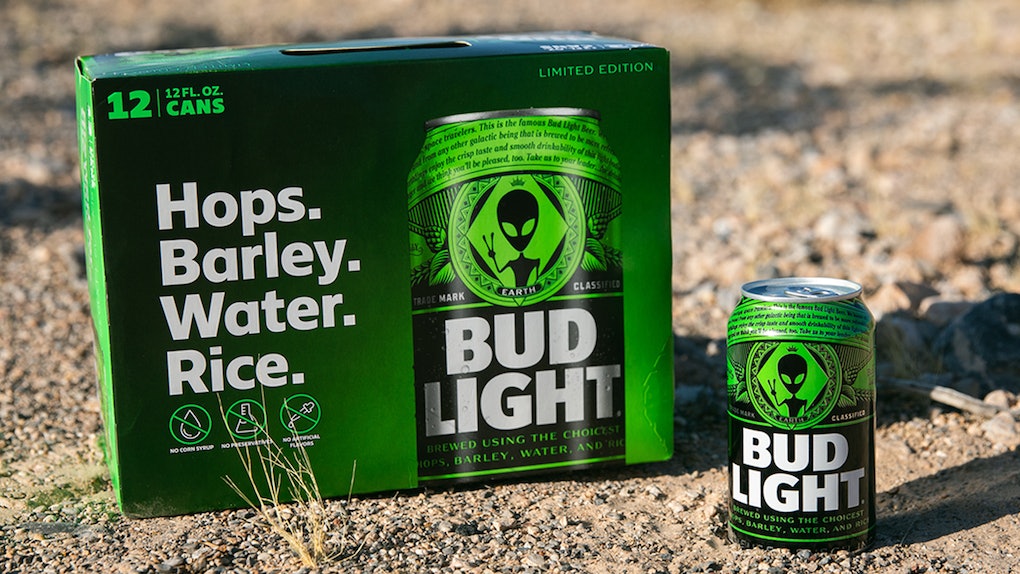 The fall season is about to get a supernatural twist. If you're one of the many alien fans loving the recent Area 51 memes on social media, you'll want to make sure you're stocked up on the perfect extraterrestrial beverage. Thankfully, this popular beer company has got your back with a new product that brings the mysteries of the cosmos down to Earth. Bud Light's new alien-themed Area 51 cans are the perfect way to celebrate the scheduled date of the joke raid.

You'll be able to purchase the Area 51-inspired aluminum cans beginning on Sept. 13 in Nevada, Arizona, and California. Featuring green and black colors with an alien flashing a peace sign, the cool design is definitely a unique twist on the classic Bud Light can.

The special edition beverage is all in preparation for the Sept. 20 Facebook event called "Storm Area 51, They Can't Stop All of Us," which started off as a joke back in late June bit has now reached 2.1 million people who have said they're attending on the social media website. In response to the phenomenon, Bud Light posted a picture on Twitter of the "Area 51 Special Edition" packaging on July 17. When one user asked, "Is this real?!" the Bud Light account responded, "51,000 RTs and we'll make it happen." Though the post only amassed 40,938 retweets, it still gained enough buzz for the beer company to make it happen anyway. I mean really, who wouldn't want alien-themed beer if given the opportunity?

Although the limited edition Area 51-themed Bud Light cans will only be available for beer drinkers in California, Nevada, and Arizona, alien superfans from all over the country can still get in on the intergalactic fun buy grabbing one of the eight new alien-themed items available on the company's online store.

In addition to providing the perfectly out-of-this-world beverage and gear for anyone who is actually planning to go through with taking a trip to Nevada for the Sept. 20 Area 51 raid, Bud Light is also putting up a music festival in celebration of all things alien that same weekend. Bud Light's Area 51 Celebration is scheduled to take place in downtown Las Vegas on Sept. 19, featuring an undisclosed lineup of musical artists.

While Bud Light and several other companies are definitely joining in on the fun of the Area 51 memes that took over the internet this summer, it is still not very clear whether the online jokes will result in a potential disaster when Sept. 20 finally arrives. Even though the Facebook event's creator confirmed the proposed raid is totally satirical and the U.S. Air Force issued a serious warning to anyone who attempts to trespass on Area 51, the immense popularity of the "Storm Area 51, They Can't Stop All of Us" group pretty much ensures that a sizable group of people will show up in Nevada on Sept. 20 nonetheless. Hopefully these new Bud Light cans, merch, and event will serve as a suitable substitute to deter anyone from actually trying to run into Area 51... which, if you didn't already know, you should definitely not try to do!