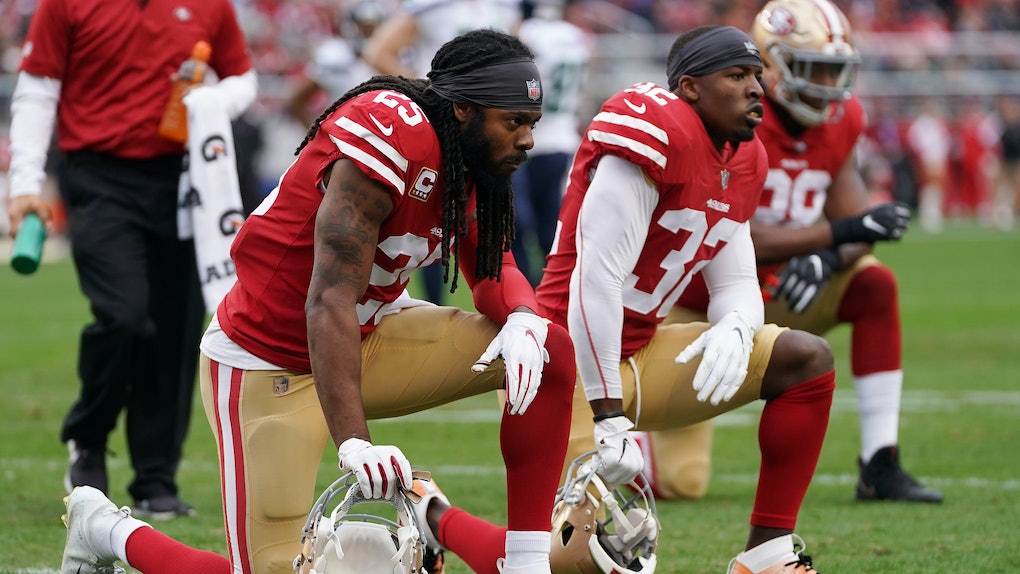 Did Players Kneel At The 2019 Super Bowl? Twitter Makes It Clear The Protest Isn't Over

If you manage to keep up with the National Football League (NFL) at all, you may know a little bit about the conversation circulating around certain athletes taking a knee during the national anthem. Over the past few years, many players have taken to kneeling during the iconic pregame song to protest police brutality and racial inequality in the country. And if you weren't able to catch the biggest game of the year live, you may be wondering: Did players kneel during the national anthem at the 2019 Super Bowl?

Maybe you happen to be rooting for Tom Brady this year, or maybe you happen to fancy Los Angeles Rams quarterback Jared Goff. Heck, maybe you don't care about any of it at all (holla!). But regardless of how you're feeling about the game itself, there's a likely chance you're wondering if any NFL players kneeled during the performance of "The Star Spangled Banner." It usually tends to be a hot topic among NFL audiences and players alike, and this year, it didn't seem as though any players on the field were kneeling during "The Star Spangled Banner." An NFL policy announced in May 2018 forbids players from kneeling on the field, but allows them to protest by staying in the locker room.

However, that doesn't mean that this protest was forgotten, and it seems as though fans are still vocalizing what kneeling stands for. On Twitter, many fans started sharing the hashtag #ImWithKap, in reference to Colin Kaepernick, who started the protest in 2016. Many fans were using it to support the protests even if they weren't happening on the field.

Some people also used the hashtag to announce that they were boycotting the game in solidarity with the protests.

In case you don't know when the concept of kneeling during the national anthem first started, let me be the one to fill you in. While a number of athletes joined the kneeling protests after Colin Kaepernick led the charge, the act first gained worldwide attention when former San Francisco 49ers quarterback Colin Kaepernick was photographed kneeling during the third game of preseason back in 2016.

When it first happened, NFL.com's Steve Wyche asked the athlete why he chose not to stand for the national anthem, to which Kaepernick responded that he didn't want to show pride for a country that ignores racism.

According to NFL.com, Kaepernick said at the time:

Kaepernick was reportedly accused of disrespecting military members by not rising, and his response was that he greatly respects those who honor the country. He simply does not respect the fact that in his opinion certain people don't receive the freedom and justice that they, as Americans, deserve.

According to SBNation, Kaepernick said in August 2016:

Kaepernick continued protesting beyond the 2016 pre-season into the regular NFL season that year. Other players started joining him in a kneeled position during "The Star Spangled Banner," and eventually, the vocal athlete donated $1 million to causes to honor his protest.

In May 2018, the NFL announced its new national anthem policy, which, according to the written policy, removed the NFL's previous rule that all players and personnel should be on the field during the anthem. It also stated that the NFL believes all team and league personnel on the field during the anthem should stand, but allows players to stay in the locker room as a form of protest. It also stated that the NFL Commissioner will "impose appropriate discipline on league personnel who do not stand and show respect for the flag and the Anthem."

President Donald Trump has long been vocal about his opposition to players kneeling during the national anthem, as seen by his August 2018 tweet in which he ended a diatribe against kneeling NFL players by writing, "Stand proudly for your national anthem or be Suspended Without Pay!"

So, there you have it. Players didn't kneel during the Super Bowl national anthem this year, but it seems like fans are heavily supporting the cause. Hopefully, racial equality will someday be achieved, and this won't even be a topic of discussion. But until then, it will definitely persist... for all the right reasons, that is.