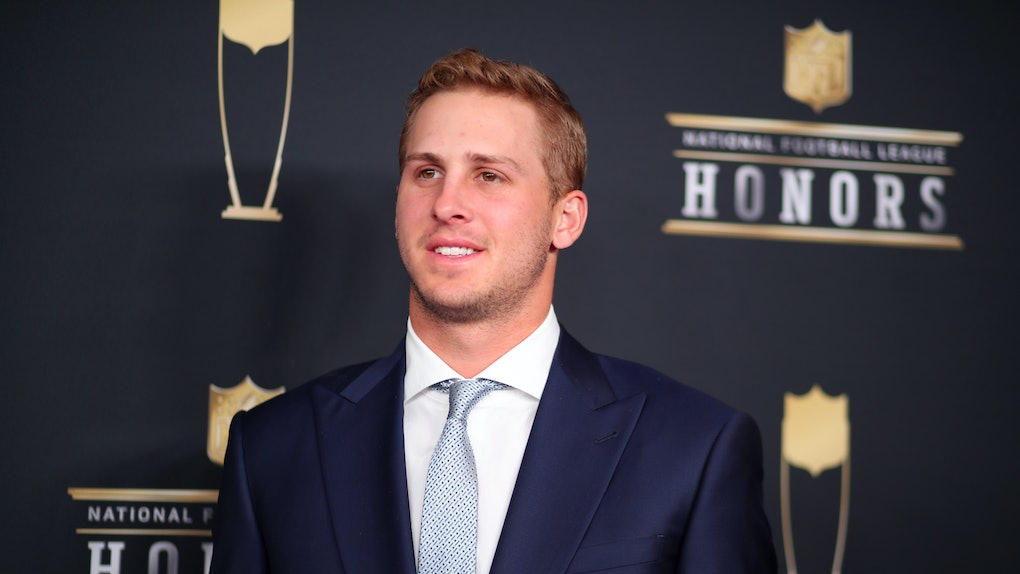 Is Jared Goff Single? The LA Rams Quarterback Is Reportedly Dating A Model

Football season is almost over, but, as the biggest game of the year looms closer and closer, fans are becoming even more invested in the athletes themselves. Can you blame them? The Los Angeles Rams will face the New England Patriots at the Super Bowl on Feb. 3, and since the game will see Patriots veteran Tom Brady face off against one of the youngest quarterbacks in the NFL, Jared Goff, it's kind of a big deal. At only 24 years old, Goff certainly seems like an eligible bachelor, but is he actually? Seriously... is Jared Goff single? (You know, asking for a friend). Well, it looks like this QB might just be off the market, but he's reportedly keeping it pretty low key.

Rumors of Goff's alleged romance have been flying around for weeks, although they are still yet to be confirmed. According to SportsGossip.com, the footballer has been dating model Christen Harper, but when exactly these two started seeing each other remains unclear. Goff's got some top notch secret-keeping skills. As a source reportedly told the website, "Jared is hiding her from everyone except some friends. She was at the game last weekend but sat with the Whitworth clan and not his family and friends from home," likely referring to Rams player Andrew Whitworth. Of course, neither Goff nor Harper has confirmed this rumor, so it's impossible to say whether or not it's true. Neither one has posted any photos of them together on social media, either.

Harper has worked with Guess and Revolve, among others, and boasts an impressive 197K followers on Instagram. Elite Daily reached out to Goff's agent for confirmation or comment and did not hear back by the time of publication.

Even Ryan Seacrest tried to gauge if the rumors were true, speaking to Goff's roommate during an episode of On Air With Ryan Seacrest. Seacrest asked whether or not the rumors were true, but ever the loyal friend, Goff's roommate (a man named Patrick) stayed mum on the dating details. However, it's good to note that Goff does follow Harper on Instagram, so at the very least, they are friends.

In a November 2018 episode, On Air team member Tanya Rad revealed that Goff had actually previously slid into her DMs, although she claimed that it wasn't a flirty message. Seacrest, however, disagreed, as he reportedly said, "Tanya, it was a DM, a DM is flirty!" Whatever the case, there haven't been any more signs that Rad and Goff continued flirting, and it seems as though Goff likes to keep his dating life on the down low. The football player doesn't upload too many personal photos aside from sweet snaps with his dog, family, and friends.

Regardless of his relationship status or what he's posting on Instagram, it's safe to say that an appearance by Harper at Super Bowl LII in Atlanta might just be a possibility. It totally makes sense that he'd want to keep the public's focus on the sport, as opposed to his own personal life, and for that, ya gotta give it to Goff. Needless to say, he's probably had a lot on his mind in the months leading up to the Super Bowl, and hopefully, all his team's hard work will pay off on Feb. 3. (Because let's be real, Tom Brady could use a slice of humble pie.) Either way, he's already won just by making it this far.