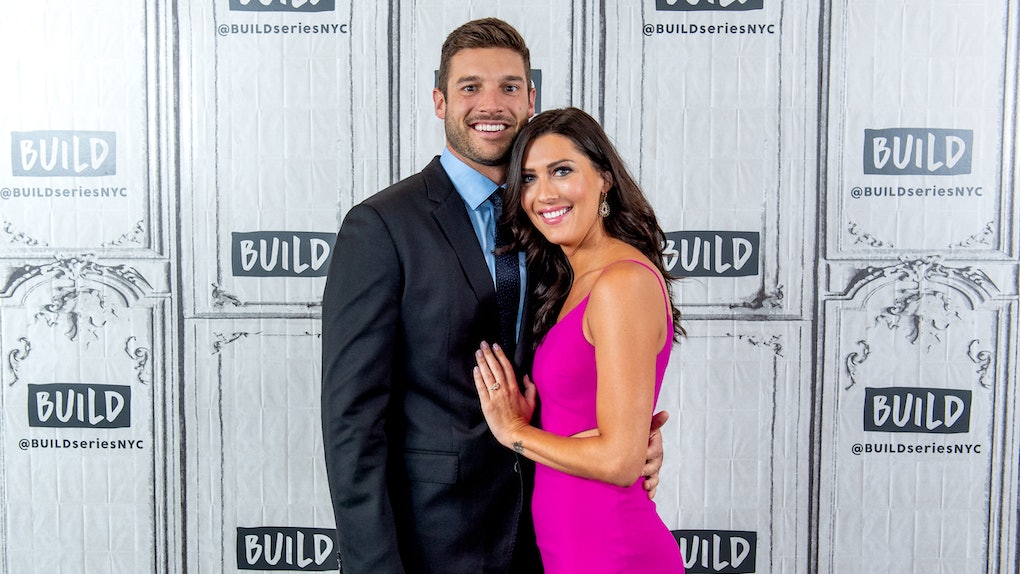 Did Becca Kufrin Move Into A New Home Without Garrett Yrigoyen?

Rumors have been swirling for about a month now that Becca Kufrin and Garrett Yrigoyen's relationship may be on the rocks (or already over), but this new update might be the best indicator of all about their current status. If you've been keeping an eye on Kufrin's Instagram Stories, you may have noticed that her living space did not look like the two-bedroom apartment she shared with her fiancé in Carlsbad, California. So, did Becca Kufrin move into a new home without Garrett Yrigoyen? (Representatives for both Kufrin and Yrigoyen previously did not respond to multiple requests for comment on the rumored split.)

On Aug. 20, Kufrin shared a photo on her Instagram Story featuring an empty box with packing peanuts spilling on the floor and the caption, "one of my worst nightmares." Three days later, she shared a video of her dog, Minno, lounging on a gray sofa in a totally different living room than the one in her home with Yrigoyen. It's unclear where Kufrin is living or whether this is a permanent situation, but it's definitely an interesting update amid all the recent breakup rumors — especially given that the couple has seemingly not been in the same state since late June.

While Yrigoyen has yet to address the rumored split, on Aug. 6, Kufrin slammed an E! News story that claimed the couple ended their relationship due to the fact that she is still "very upset" about his controversial comments about police. The news outlet's source claimed that the couple's "lifestyles don't mesh anymore" and that they're living separately.

"They are trying to keep it low-key because they are still working things out, but the relationship is definitely done, the source reportedly claimed to E! News.

When the news outlet posted the article on Instagram, Kufrin's commented, "Lol interesting 'source.' I mean if nothing else, the least you could do is spell the names correctly and consistently in your article," she wrote. (E! News had previously misspelled Yrigoyen's name in the initial version of the story.)

Public interest in the couple's relationship status began on June 4, when Yrigoyen shared an Instagram post with a thin blue line showing his support for the police amid the Black Lives Matter protests. Days later, Kufrin made it clear on the Bachelor Happy Hour podcast she cohosts with Rachel Lindsay that she did not "align with" or "agree with" his Blue Lives Matter post.

"I don’t think he meant it in a malicious way," she explained to Lindsay, "I do think it was tone deaf and it was the wrong time and message and sentiment. … I’m trying to get him to see the bigger picture."

Kufrin added that she believed Yrigoyen wanted to stand by the cops because his friend's partner was shot in the back of the head during one of the riots. It was also during this podcast episode that Kufrin admitted that the future of their relationship was up in the air.

"For those who are curious about my relationship with Garrett at this point, all I can say right now is that I don't know," she said at the time. "I can't give anything more than that. It's something that we are trying to work through and discuss and do work on at home at this time and that's where the work will remain and that's really the best I can give you at this point."

According to an Us Weekly report, Kufrin left California and flew to her home state of Minnesota on June 29. Social media posts made it obvious that the couple did not celebrate the Fourth of July together. Then, during a July 7 episode of the Bachelor Happy Hour podcast, Kufrin told Lindsay that the breakup rumors were taking a toll on their relationship, which used to feel like "easy sailing."

"With everything happening, I feel like I'm being tested," she explained.

Adding fuel to the fire was the fact that when Yrigoyen attended his friend's wedding on July 18, it appeared that Kufrin did not go with him (she posted a pic that weekend showing she was in Wisconsin with her niece). Eagle-eyed fans also took note that Kufrin was not wearing her engagement ring during the July 21 episode of Bachelor Happy Hour podcast.

More recently, Garrett Yrigoyen deleted his "Becca Spills" highlight reel on Instagram — and the timing was super sus. He removed the reel from his page on Aug. 6, which just so happens to be the two-year anniversary of when The Bachelorette Season 14 season finale aired.

Until Kufrin and Yrigoyen officially confirm their status, it's unclear whether or not they're still together — although it may be worth noting that their last Instagram post including each other was on May 11 (for their second anniversary). Does this new living space mark a fresh start from their relationship? Only time will tell — but at least it looks like she's getting some much-needed personal space (and QT with Minno) during a seemingly stressful time.

More like this
Did Bennett Jordan Send Kelley Flanagan Flowers? Here's Why Fans Think So
By Candice Jalili
Zac Clark's Quote About His Relationship With Tayshia Adams Post-'Bachelorette' Is Honest
By Corinne Sullivan
Matt James & Rachael Kirkconnell Reportedly Aren't Together After Their Rumored Reunion
By Joyann Jeffrey
Stay up to date