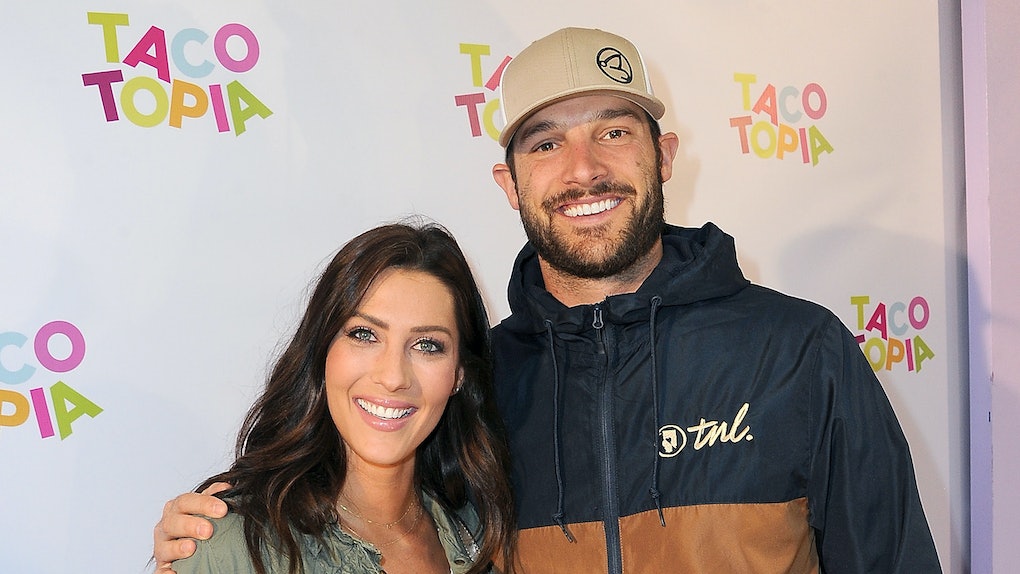 Did Becca Kufrin & Garrett Yrigoyen Break Up? This Update Is Confusing

They were very much not on the same page about a controversial Instagram he posted back in June, but did Becca Kufrin and Garrett Yrigoyen break up? Things took a very confusing turn over the Fourth of July weekend. Fans started wondering if something was up when it became clear via social media that they spent the holiday weekend apart, with Kufrin going for a trip with their dog Minno, and Yrigoyen spending time with his family.

Of course, the couple doesn't have to spend every single holiday together — so the time apart doesn't necessarily mean that they're broken up. That being said, it appears that the two have been quarantining together, so the time apart would definitely be a break from their norm.

Now here's what leads me to believe they're not broken up. Yrigoyen posted a couple of photos of himself with a young family member and wrote in the caption:

Happy 4th of July. Teaching the little guy what our flag stands for 🇺🇸:The stripes represent the original 13 Colonies. The stars represent the 50 states of the Union. 🟥 (red) symbolizes hardiness and valor, ⬜️ (white) symbolizes purity and innocence, and 🟦 (blue) represents vigilance, perseverance and justice.

Kufrin then commented on the post saying, "“I just wanna eat those cheeks” (presumably in reference to the baby). So, either they're still together or they broke up on very good terms.

Speculation of a split first started when Kufrin gave an extremely vague update on their relationship status during a June 16 episode of her Bachelor Happy Hour podcast.

"For those who are curious about my relationship with Garrett at this point, all I can say right now is that I don't know," Kufrin revealed. "I can't give anything more than that. It's something that we are trying to work through and discuss and do work on at home at this time and that's where the work will remain and that's really the best I can give you at this point."

ICYMI: The controversial post behind their potential split was shared by Yrigoyen on June 4. It featured a black box accentuated with a thin blue line and was paired with this caption defending police amid Black Lives Matter protests:

I’ve been pretty tore up the past week about everything going on. I’ve listened, learned, helped, supported, and grown. With so many friends and family in law enforcement I couldn’t sit back and not support them and the hundreds of thousands of men and women of all races that represent this Thin Blue Line as well. It’s important for me to recognize the ones who stand in the gap and put their lives on the line each and every single day for humans of different race and ethnicity, including those who hate them. The Thin Blue Line represents each officer protecting protestors, properties, and businesses while being threatened, attacked, shot, shot at, hit with vehicles, and other forms of brutality. There have been over 300 injured, shot, or killed in just one week. They are suffering the consequences over an act they didn’t commit. They continue to put in overtime away from their families, stay silent while being threatened, hated, and assaulted. We can’t judge an entire group of people by the actions of a few. We can’t judge the peaceful protesters by the actions of the few violent protesters, and we sure can’t judge all cops by the actions of a few bad ones. Remember when they put on the badge they’re still humans, with raw emotion, the more brutality they face the more on edge they become, they make mistakes, they have compassion, and no matter how terrible they are treated or whatever negative is said to them, they still show up for us when we need them! Remember these men and women who hold this Thin Blue Line; strangers, friends, family, neighbors, or your enemies. They will always be out there protecting us, no matter what!#thinblueline #antiracism #antibrutality

On subsequent episodes of Bachelor Happy Hour, Kufrin made it clear that she does not agree with Yrigoyen's stance and is trying to get him to understand the error in his thinking. Are you having similar conversations with your partner? Here's your guide to discussing police brutality.