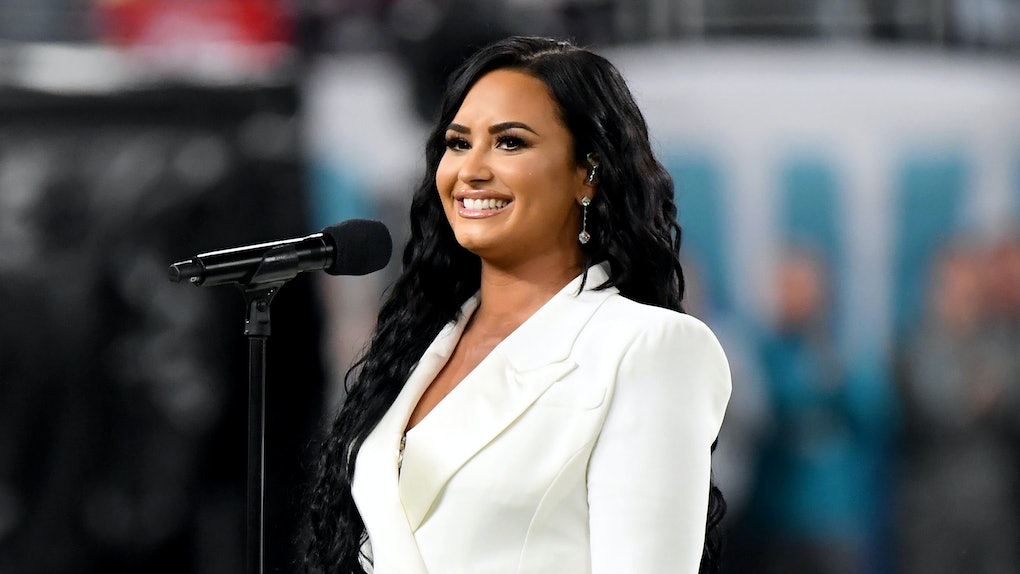 Demi Lovato is continuing to speak out against criticism over her latest single "Commander In Chief." After dropping the song on Wednesday, Oct. 14, the singer received backlash for expressing her strong political views in its lyrics, with some fans saying she went "too far" for directly calling out president Donald Trump. In her latest clapback to her haters, Lovato brought up another celebrity who's received hate through the years for sharing her political views: Taylor Swift. Demi Lovato's quotes defending Taylor Swift for getting political raise a good point.

In "Commander In Chief," Lovato shares her thoughts on Trump, the coronavirus pandemic, and the protests that erupted around the United States following George Floyd's May 25 death at the hands of Minneapolis police.

"Commander in Chief, honestly/ If I did the things you do/ I couldn't sleep, seriously/ Do you even know the truth?/ We're in a state of crisis, people are dyin'/ While you line your pockets deep/ Commander in Chief, how does it feel to still be able to breathe?" Lovato sings on the track, referencing Floyd's last words, "I Can't Breathe," which became a rallying cry used by protesters in their fight against police brutality.

Despite some fans telling Lovato her new single could potentially ruin her career, the singer has made it clear she won't back down. Just hours after releasing the song on midnight on Oct. 14, Lovato performed it at the 2020 Billboard Music Awards and revealed she'll "take integrity" in her work "over sales any day."

Now, Lovato has spoken out in defense of Swift, writing, "You’re damned if you do, you’re damned if you don’t. You can list Taylor Swift as a perfect example of that exact saying," she told CNN in an Oct. 14 interview. "For years she got trashed because she wasn’t taking a stance and wasn’t standing up for these rights and she kind of took a back seat. Now she’s become very political and there are people that are unhappy with that, too."

On Oct. 8, Swift announced on Instagram she will be voting for Joe Biden and Kamala Harris in the upcoming election, marking her first public endorsement of a presidential candidate.

"It’s just, like, you have to live what feels authentic to you. To me, that’s using my platform to speak out about the things that I see that are wrong," Lovato added.

It seems Lovato won't ever give in to haters, and she won't stand for anyone coming after her famous friends, either.