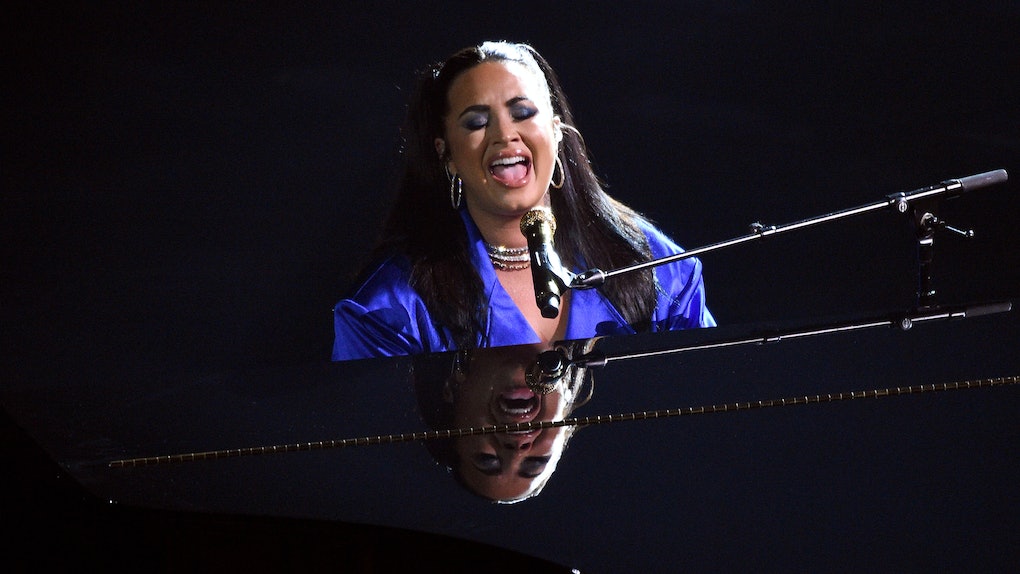 Hours after Demi Lovato released her powerful political anthem "Commander In Chief" on Wednesday, Oct. 14, she performed it live for the very first time during the 2020 Billboard Music Awards. Lovato's song makes a statement and is aimed at getting her followers pumped up to vote in the upcoming presidential election, and it seems it did just that. The tweets about Demi Lovato's "Commander In Chief" BBMAs performance all share a similar message.

On Wednesday morning, Lovato dropped the track that takes direct aim at president Donald Trump, the current state of the USA amid the coronavirus pandemic, and racial unrest. Directing her message at Trump, Lovato sings: "Do you even know the truth / We're in a state of crisis / People are dying /While you line your pockets deep / Commander in Chief / How does it feel / To still be able to breathe?"

After getting flooded with backlash on social media for speaking her mind, Lovato defended her decision to release a political song. "I literally don’t care if this ruins my career," Lovato wrote. "This isn’t about that. I made a piece of art that stands for something I believe in. And I’m putting it out even at the risk of losing fans. I'll take integrity in my work over sales any day."

When it came time for Lovato to perform the song on Wednesday night, she was armed with emotion. Sitting behind a piano, Lovato's no-frills performance featured only a handful of background singers who remained socially distant from each other as they helped Lovato deliver the power anthem.

It didn't take long for viewers at home to flood Twitter with their reactions.

As if her day and night wasn't big enough with the release of "Commander In Chief" and the world premiere performance, Lovato also dropped the powerful music video for the song minutes after taking the BBMAs stage.