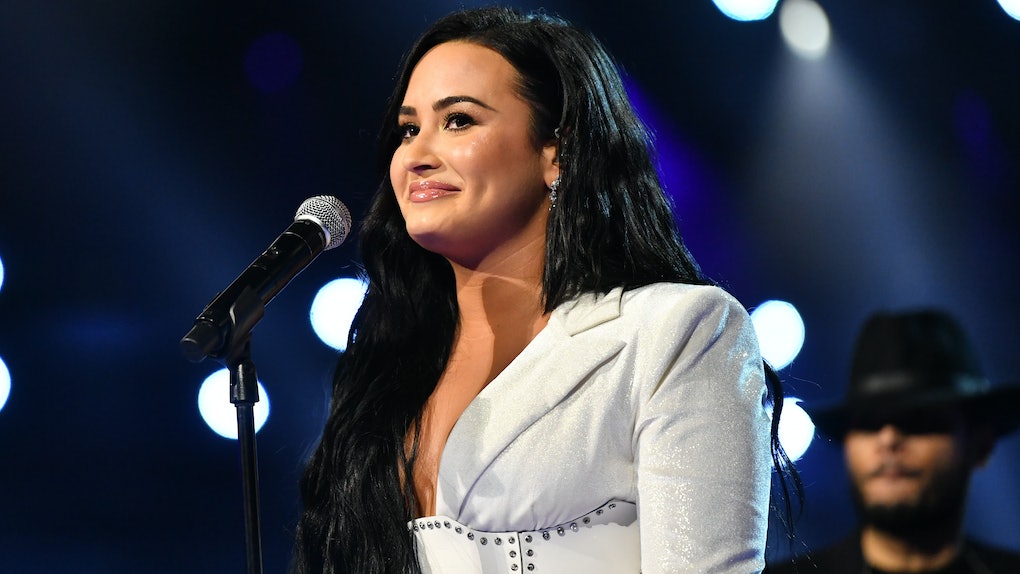 Demi Lovato knows there are more important things in life than just her music career. On Oct. 14, Lovato released her powerful anti-Donald Trump anthem "Commander In Chief," where she didn't hold back on her feelings about the businessman's presidency. Already, she's received a lot of backlash, but she isn't phased by the hate. Demi Lovato's response to backlash over getting political in "Commander In Chief" is all about priorities.

Hours after Lovato dropped the track, she took to her IG Stories to share some messages she received about the song in which she sings about the United States' current state amid the coronavirus pandemic and ongoing racial injustices. In "Commander In Chief," Lovato gets real about the virus, continually asking Trump how it feels to "still be able to breathe" while also taking aim at him for "spinning" political stories to make himself sound better and ultimately ignoring the truth of what's going on around him.

"I'm getting a lot of these comments..." Lovato posted alongside a screenshot of a fan telling her they are "ashamed to be a Lovatic right now" and saying that this song went too far and could potentially ruin her career. Lovato followed up the post with her response to the fan, writing,

I literally don’t care if this ruins my career. This isn’t about that. I made a piece of art that stands for something I believe in. And I’m putting it out even at the risk of losing fans. I'll take integrity in my work over sales any day.

Lovato went on to say that she "would like to be sad" that she disappointed a fan, but she's "too busy being bummed that" someone would expect her, "a queer Hispanic woman, to silence" her "views/beliefs in order to please" an audience.

Music is art. Art is expression meant to create conversation. We are heading into the most important election of our lives. This song isn't about division. This is about finding answers from our sitting president. So please debate, and talk about voting. That's what this is all about

From Lovato's responses, it seems she knew this song would get people talking and that seems to have been her goal all along.

More like this
Is Olivia Rodrigo's "Good 4 U" About Joshua Bassett? Fans Are Convinced
By Michele Mendez
TXT's 'The Chaos Chapter: FREEZE': Release Date, Tracklist, Music Videos & More Details
By Michele Mendez
BTS' Group Teaser Photo For "Butter" Is So Smooth
By Abby Monteil
Stay up to date