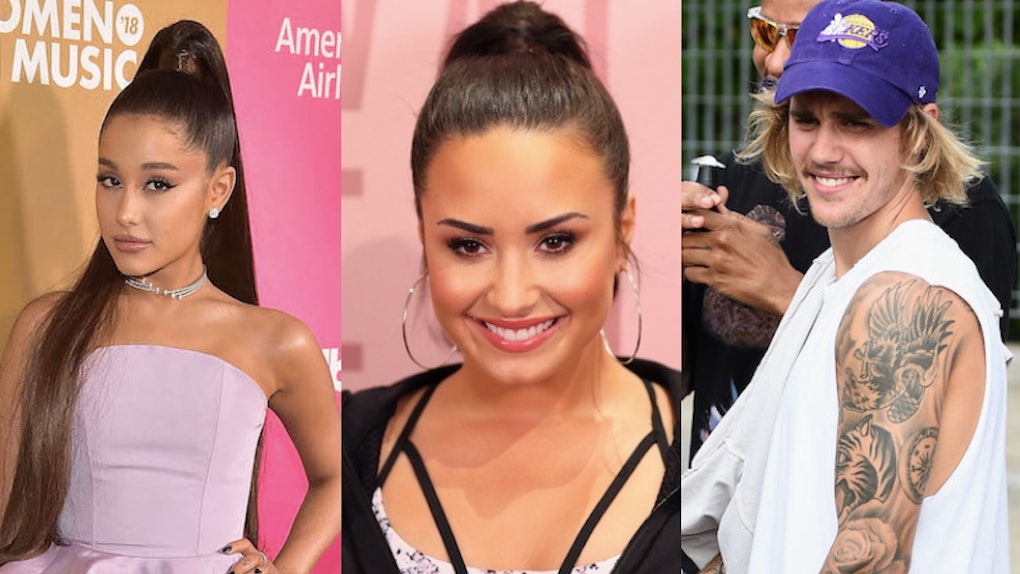 Demi Lovato is entering an entirely new phase in her life and career. The 26-year-old singer has a brand new manager whose name and clients you've most likely heard of. Demi Lovato signed with manager Scooter Braun, aka Justin Bieber and Ariana Grande's manager, and I can only believe that means there are big things coming up for the artist.

On Saturday, May 11, Lovato posted an Instagram photo of her sitting next to Braun with a small stack of papers between them. In the photo, Lovato is wearing a purple and blue windbreaker and Braun is sporting a casual tee and baseball cap as they both pose with giant smiles. Though you might not know it from the photo itself that Lovato signed with Braun, the news and her excitement about it is so clear in the caption. Lovato wrote,

In case you haven't heard of Braun before, he and his talent management company manage artists like Ariana Grande, Justin Bieber, Carly Rae Jepsen, Kanye West, and Usher, per the Scooter Braun website. So, Lovato is joining a star-studded lineup of her peers with this new career move. IDK if it's too much to ask for a Bieber, Grande, and Lovato bop, but I've got my fingers crossed.

Lovato's Instagram post got a lot of support and comments from people like Hailey Bieber who wrote, "Yayyyyyyy," and Ashley Graham, who is also represented by Braun, exclaimed, "Welcome to the fam Demi!!!!!!"

In addition to sharing a photo on Instagram, Lovato posted some thoughts about this new phase in her life on her Instagram Story on Sunday, May 12. She wrote,

Hi I've cried four times today...I'm so f*ck*ng grateful, excited, and ready. Couldn't be happier. God is good. Gonna take my time to release new music and then it's game on!!!

Braun reposted the photo Lovato posted to her account with his own caption, writing, "Reposting this pic from @ddlovato. She is a special person and a special talent. I’m... we.. are honored. Welcome to the family Demi."

The move comes after Lovato separated from her longtime manager, Phil McIntyre in 2018, per Page Six. Lovato also spent 2018 focusing on her sobriety after she was rushed to the hospital after a reported relapse and subsequent overdose in July 2018. At the time, a rep for Lovato said, "Demi is awake and with her family who want to express thanks to everyone for the love, prayers and support. Some of the information being reported is incorrect and they respectfully ask for privacy and not speculation as her health and recovery is the most important thing right now."

She canceled her remaining 2018 tour dates to concentrate on recovery and didn't release new music in the fall or winter. The new year started off on the right foot for Lovato, as she shared at the end of January 2019 that she was six months sober. With the hope of new music on the horizon after signing with Braun, I think it's safe to say that 2019 will be a year to remember for Lovato.

I, for one, am really looking forward to Lovato's new music, even if it doesn't come as quickly as I'd like. And who knows, maybe we'll see Lovato collaborating with some incredible artists from Braun's management company in the near future — I don't know about you, but I'd kill to see a girl power-filled song featuring Grande and Lovato. Stay tuned!