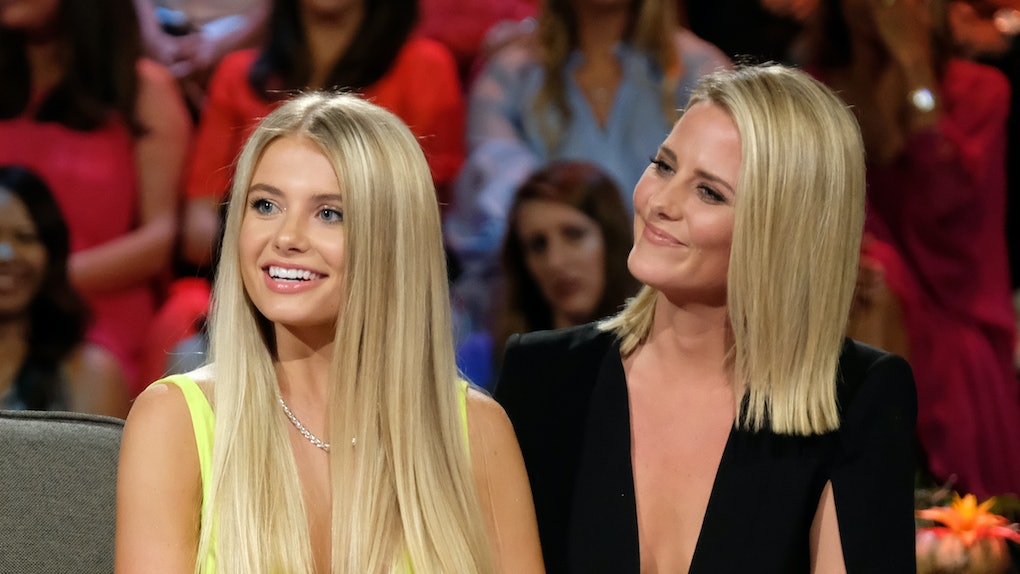 Who needs drama when you can have a triple dose of romance? The Bachelor in Paradise season finale saw not one, not two, but three couples get engaged — including the franchise's first-ever same-sex couple — and I'm still swooning. Demi Burnett may have hit it off with Derek Peth when she first arrived in Paradise, but as soon as Kristan Haggerty appeared, it was made clear what (and who) Burnett really wanted. These two beauties seem totally meant to be, which is why Demi Burnett and Kristian Haggerty's astrological compatibility might surprise you. While they definitely aren't the worst match the cosmos have ever seen, their signs are not quite as ideal for each other as you would think.

Burnett is a Pisces, as she was born on Feb. 21, 1995. Those with a birthday that falls between Feb. 19 and March 20 are known for their empathy, imagination, and chillness. Her now-fiancée Haggerty was born on Dec. 4, 1996, which makes her a Sagittarius. People born between Nov. 22 and Dec. 21 are known for being extroverted, open-minded, and enthusiastic. While kindred spirits, Pisces and Sagittarius do share some qualities that make them a potential problematic match. Allow me to explain.

Pisceans and Sagittarians both tend to romanticize situations, which can be both a gift and a fault. Because they see the world through rose-colored glasses, they may idealize a romantic partner and find themselves blinded by love before really getting to know the person. Pisces-Sagittarius relationships tend to start like dream-fueled fairytales, but that infatuation doesn't tend to last. Pisces and Sagittarius are both mutable signs, after all, which means that — while they're flexible and adaptable — they crave constant excitement and change. These two signs may begin their partnership totally fascinated by each other, but it's possible that boredom will set in sooner rather than later.

Another thing these two signs have in common: They're both ruled by Jupiter, the planet of luck and exploration. Burnett certainly had the good fortune of having Haggerty arrive by surprise in Paradise, which gave her the opportunity to explore a relationship with her. The beauty (and curse) of Jupiter's rule is that everything in a relationship between a fish and an archer just seems to make sense and fall into place. For these two signs, there's no point in questioning a good thing — it's better just to let it happen and enjoy the ride. Is that such a bad thing? Maybe not right away, but it may cause some issues down the road.

Because they do have so much in common, Pisceans and Sagittarians tend to start off romantic relationships as BFFs, becoming almost inseparable. It seems as though Burnett and Haggerty first met through a mutual friend, former Bachelor contestant Catherine Agro, and while it's unclear how good of friends these two were before becoming romantically involved, it was clear that Burnett couldn't get that woman from home off her mind. Sometimes, Pisceans and Sagittarians become such good friends they have trouble leaving the platonic zone and entering a physical relationship, but that certainly wasn't an issue for PDA-loving Burnett and Haggerty.

Now I'm not saying these two are living in a bubble that will inevitably burst. While clearly infatuated with each other, both women do defy some qualities of their signs. Both an archer and a fish have a reputation for being indecisive (probably due to their mutable natures), but from the very beginning, it seemed as though this couple knew exactly what they wanted. Pretty much the moment Haggerty arrived in Paradise, she told Burnett, "I only came here for you. I don't want to be just an option for you." In turn, Burnett explained to Haggerty, "The more I was away from you the more I thought about you. The second that I saw you, I knew it's you and it's always been you and I want to be with you." That may be the romantic in both of them speaking, but to me, those words sound pretty darn earnest.

Whatever their astrological compatibility says, I feel pretty confident the passion between this water sign and this fire sign isn't going to extinguish (heh, see what I did there?). In my opinion, these two haven't just fallen in lust, and though a bit of luck may have brought them together, it's a genuine connection that will keep them together.