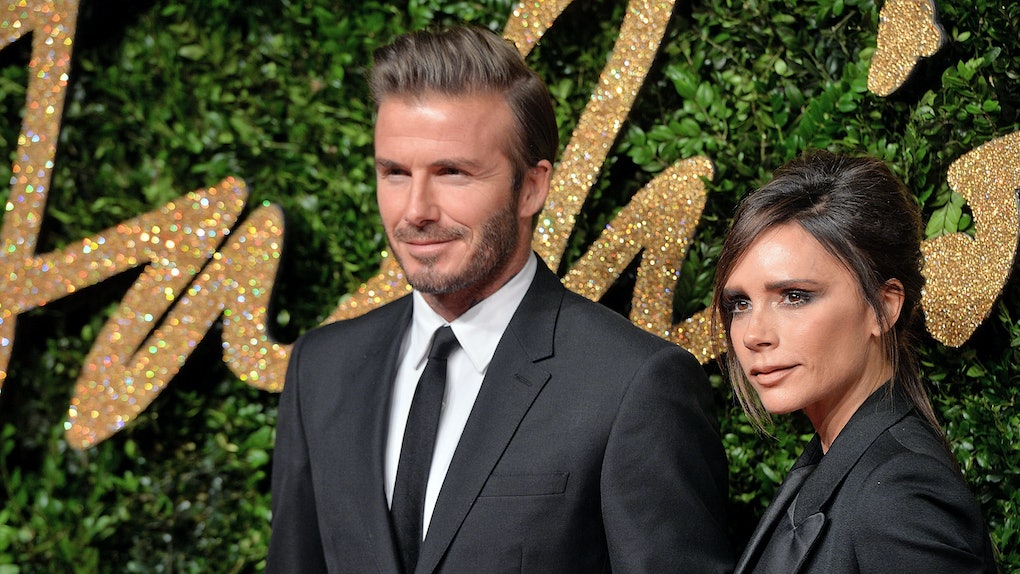 Your body language with your partner — how you sit together, the way you pose in photos, even the way you walk down the street — is pretty important. Even the littlest things, like where you place your hand, can show people how happy you are in your relationship. And after nearly two decades of being married, David and Victoria Beckham's body language reveals quite a bit.

David and Victoria started dating back in 1997, when Victoria was making it big with the Spice Girls as Posh, and Beckham (AKA "Becks") was crushing it at the peak of his soccer career. The two got married in 1999, and have been together ever since, supporting each other in their career endeavors and having four children together.

I reached out to U.K.-based body language expert CJB Baxter to find out what David and Victoria's body language says about their relationship, and how it has changed over the course of their 19-year marriage.

The answer? It's clear that they're still going strong. Baxter does note that it's important to remember that we don't know what goes on when the cameras aren't around, but believes that Posh and Becks are content together.

"With all photographs, we can only deduce what’s happening at that very point, what happens after the cameras have gone remains a mystery," Baxter says. "However these pictures do give us an insight into their emotions toward each other… and as you can see, there is still a loving bond there, 19 years later!"

Here's what the famous couple's body language has looked like over time, and what it says about their love.

There's Always Been Sincere Affection Between Them

This tender moment from April 2004, five years after they were married in 1999, shows just how in love David and Victoria have been from the beginning. That adorable forehead kiss is especially important to note here.

Plus, just by looking at their faces in this photo you can tell they seem blissfully happy, even while posing on a red carpet.

There's No Lack of Intimacy

This shot from September 2008 reveals quite a bit about their bond, too. Both their hand placements have significant meaning, according to Baxter.

"Here, David utilizes a lower hip touch on his wife that isn’t rejected by Victoria, this is a reliable sign that intimacy still exists toward his wife," he explains. "Victoria utilizes the ‘preening display’ on her husband. This is where your partner wishes to direct the gaze of the audience onto him as if to proudly say, 'look at how well presented my man is' — again, this is a reliable sign of affection."

Essentially, their body language in this photo shows that, even nearly a decade into their marriage, David and Victoria weren't lacking in intimacy and still enjoyed showing each other off.

Her Feelings Haven't Changed Over The Years

In this photo of the couple from December 2014 — 15 years into their marriage — Baxter explains that Victoria is using what's called a "double touch" display on David.

"This is where we like to give ‘extra’ sincerity and affection to those who really deserve it," Baxter says. "This is a ‘tie sign’ where Victoria is silently showing to David (and onlookers) that her feelings towards him haven’t changed."

Baxter also says that their body language in this photo is a "reliable sign that intimacy still exists between the pair."

He's Still Attentive To Her Feelings

In this red carpet photo from November 2015, Baxter says it seems like Victoria looks uncomfortable (though likely not due to her husband!). David, in turn, is clearly aware of her feelings.

"Victoria looks to be experiencing discomfort…whilst David provides a look of reassurance to his wife, a signal that there is still a loving bond between them," Baxter says.

Even in moments that might not be going perfectly, David still makes sure Victoria is OK — and that definitely bodes well for their marriage.

They're Super Comfortable Together

In this most recent photo from April 2018, David and Victoria are still very much in love and happy together — 19 years into their marriage, and 21 years into their relationship. Baxter says it's clear they're comfortable together, which is what a marriage this long should feel like.

"David and Victoria here are experiencing seated comfort – where both are relaxed in their current surroundings," he explains. "This is to be expected from a long-married couple and there are no signs based on this picture of any concealed issues here."

It seems that, over the years and throughout their time together, Posh and Becks' body language has been fairly consistent, too.

"I’d say their body language has remained consistent over time," Baxter says. "Their love and affection toward each other has grown as they’ve grown up together."

So, there you have it — over the years, David and Victoria Beckham have only grown closer, their love evolving with time as shown through their body language.