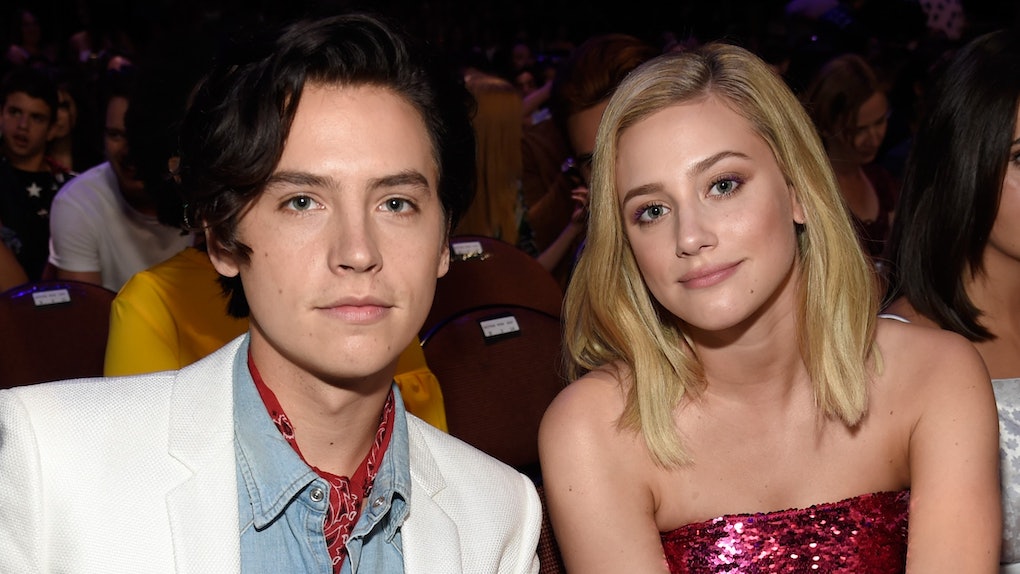 Unlike Cole Sprouse and Lili Reinhart's Riverdale characters, Jughead and Betty, fans only know bits and pieces about their real-life, on-and-off relationship. Fans first speculated they were dating in March 2017 — three months after the CW series premiered — when Reinhart seemingly became Sprouse's photographic muse on Instagram. The stars neither confirmed nor denied they were dating for years (seemingly to maintain some privacy). Eventually, Reinhart confirmed their relationship on her own terms in an August 2018 Instagram, calling Sprouse her "love." Sprousehart ultimately split up in early 2020, but Cole Sprouse and Lili Reinhart's quotes about their split reveal they're still very much in a relationship, even if it's just friendship.

Sprouse and Reinhart were known for trolling the media and their fans when it came to their relationship. Whenever rumors spread online about them, instead of addressing them head-on, the stars would poke fun at the gossip, sending a clear message they didn't owe anyone an explanation. In July 2019, Reinhart talked about the importance of keeping boundaries with fans in a joint interview with Sprouse for W Magazine. "No one knows how long we've been together, and no one will until we're ready to say it," she said.

The stars maintained this mindset throughout their relationship. When reports spread claiming Sprouse and Reinhart broke up in May 2020, the couple didn't confirm it until August, revealing they'd actually been separated officially since March. Sprousehart's quotes about breakup rumors, and their eventual breakup, prove they broke up on their own terms, too.

JULY 2019: CALLING OUT THE TABLOIDS

Even before Sprouse and Reinhart officially split, they constantly had to fire back at breakup reports. A day after Sprouse and Reinhart attended Riverdale's Comic-Con Panel in San Diego on July 21, 2019, reports claimed they had called it quits after two years of dating and were no longer living together.

A few days later, Sprouse and Reinhart slammed the tabloids for spreading misinformation in hilarious tweets. "BREAKING: A reliable source has confirmed that none of you know sh*t," Reinhart wrote in a July 25 Instagram Story. She also tweeted, "Don't believe everything you read on the internet, kids. And news sources should try a little harder to be less vile. 'Reliable sources' can kiss my ass."

Sprouse also took a jab at the rumors with a ridiculous headline. "UNPRECEDENTED: Cole Sprouse and Lili Reinhart consume the flesh of 'reliable sources' to fuel their bacchanalian sex cult," he wrote. Seeing the stars on the same page was a sign to fans they were still together.

Later, when asked if the breakup rumors bothered him, Sprouse said he's learned to expect it as someone in the public eye. "That's the nature of our industry," Sprouse told ET while on the red carpet for Variety's Power of Young Hollywood event on Aug. 6, 2019. "I think you have to poke fun of it a little bit. It's kind of something you sign up for, but as long as you can keep it light and fun, it's all good."

For the rest of 2019, Sprousehart appeared to be back on track. They gushed about each other on social media, and they were seen out together in LA showing some PDA, but things took a turn in April 2020.

Unbeknownst to fans, the pair had already broken up behind the scenes in March (more on that later). But since Sprousehart was very much still on in fans' eyes, they began speculating Sprouse was cheating on Reinhart with model Kaia Gerber. Fans believed photos she'd posted on Instagram looked like Sprouse's home. The actor made it clear that wasn't the case, saying the rumors were "baseless accusations."

"When I first stepped into a public relationship this was one of the foreseeable consequences. And while I truly never intended to indulge any part of my private life to the ravenous horde, it's clear my restraint in updating them has allowed them to push their own agenda onto my habits and lifestyle," Sprouse wrote in an Aug. 20 IG Story.

The same day, Reinhart also seemingly addressed the situation. "Dear everyone on social media. Don't put people down for the sake of putting them down. Don't be a f*cking asshole. The world doesn't need anymore of that sh*t," Reinhart wrote in a since-deleted tweet. Although she didn't mention any names, it seemed clear to fans she was defending Sprouse.

In the following weeks, things didn't quiet down. When trolls trended #ColeSprouseIsOverParty because of the Gerber cheating rumors, Sprouse stayed silent, but Reinhart seemingly couldn't.

"Twitter is such a vile place. It’s so easy to say sh*t behind your f*cking phone, isn’t it?" Reinhart wrote in an impassioned, since-deleted Twitter thread on May 3. "This is why people choose to keep their relationships private... this is why people don’t have social media... because of this bullying."

Reinhart’s quotes about heartbreak in her Aug. 18 interview with Refinery29 left fans wondering if she and Sprouse were over for good once again.

"The last couple of months have probably [been] the most emotional few months of my entire life and my therapist [told] me, ‘Your body's going through withdrawal from love,'" Reinhart shared. "‘You're used to having this exchange of happy chemicals between you and the person that you're with.’ In moments of my life, I have dropped every ounce of pride that I had just to be like, 'Love me. Please take the pain away for a day, a second, an hour, just so I can feel that fix again.'"

As it turned out, Reinhart wasn't talking about Sprouse at all. "Quotes taken from my most recent interview are not about a 'breakup,'" she tweeted. "They are about the depression I’ve felt over these last few months. Tired of people taking my words out of context and piecing together their own story for clickbait."

A day later, Sprouse finally cleared everything up: he and Reinhart had broken up... a loooong time ago. "Lili and I initially separated in January of this year, deciding to more permanently split in March," Sprouse shared on IG, adding there are no hard feelings between them. "What an incredible experience I had, I’ll always feel lucky and cherish that I had the chance to fall in love. I wish her nothing but the utmost love and happiness moving forward."

Sprouse reminded fans not to believe everything they read about them online. "All I’ll say about it, anything else you hear doesn’t matter," he wrote, ending his statement by plugging Reinhart's latest movie Chemical Hearts. "Also her movie comes out soon! I’m sure she’s just as incredible in it as everything else she does."

Even though they're no longer together, it's clear Sprouse and Reinhart will still stick up for each other when it counts.