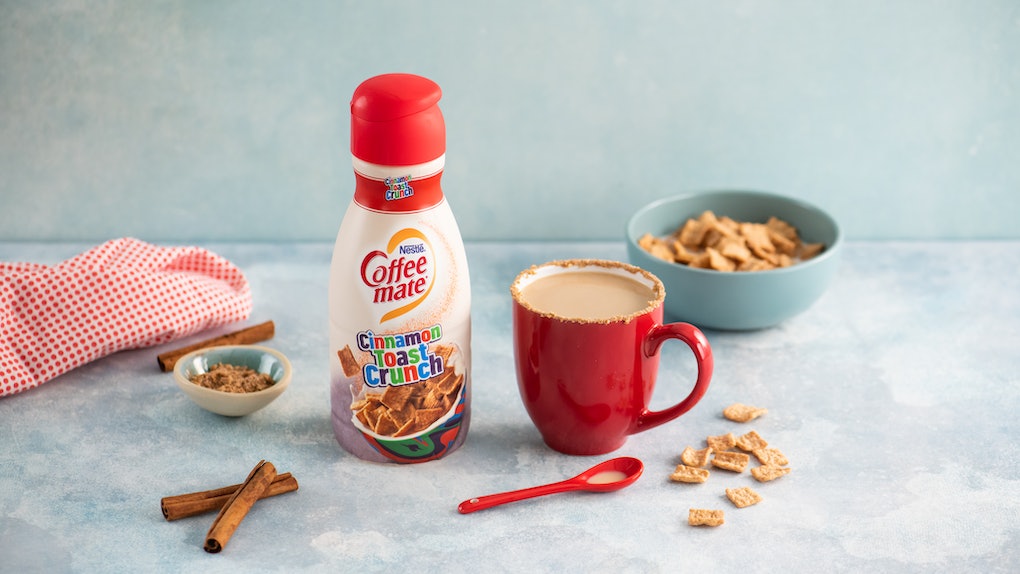 You can now get a full breakfast of cereal and coffee in one cup, and it honestly sounds do delicious. That's because Coffee Mate's Cinnamon Toast Crunch Creamer is coming out in the new year, so if you love the idea of having your fave cereal flavor in your coffee, get ready to mark your calendar for the release date.

TBH, the Coffee Mate Cinnamon Toast Crunch Creamer sounds like the best way to inspire yourself to start the day right in the new year, and luckily you won't have to wait too long to get your hands on a bottle. Dropping on the shelves in January 2020, this new creamer from Coffee mate will be sold in a 32-ounce bottle for a manufacturer's suggested retailer price (MSRP) of $3.99. With that much creamer, you can make a ton of lattes to make up for the disappearing act of all of the seasonal Starbucks drinks that follows the end of the holidays.

Per the official press email sent to Elite Daily, the Coffee Mate Cinnamon Toast Crunch Creamer will have notes of "cinnamon, brown sugar, and hints of toasted cereal to finish" tasting like the "cinnamilk" you know and love at the bottom of your cereal bowl.

Also announced are some other fun products that Coffee Mate is dropping in the new year. Alongside the new Cinnamon Toast Crunch flavor, Coffee Mate Funfetti will be another new option introduced in January. Have cake for breakfast in your cup of Joe. This creamer is noted to have "vanilla, cake batter, and a sweet finish reminiscent of frosting." The MSRP for 32-ounce is $3.99.

These Coffee Mate creamers are dairy-free, lactose-free, and cholesterol-free, so even those with stricter diets can find the joy in these flavors. The brand is also releasing a natural bliss Cashew Milk and a natural bliss Unsweetened Half & Half in January for those who prefer plainer coffee, both of which will be a 16-ounce size available for an MSRP of $3.29.

To tide you over during the holidays before these new Coffee Mate Creamers launch, the brand has its seasonal flavors such as Peppermint Mocha, Pumpkin Spice, and Red Velvet available.

Other amazing holiday options to keep you going before the Coffee Mate Cinnamon Toast Crunch Creamer hits the shelves are Target exclusives from Califia Farms. With two new dairy-free creamers, those who are lactose intolerant or vegan can enjoy some holiday treats without worry, plus these meet other strict dietary needs. The Toffee Tidings Creamer brings a rich toffee flavor, while the Holiday Nog Creamer tastes like everyone's fave, creamy holiday drink, but both are made with almond milk and have low sugar. To keep the caffeine going, you can also get the brand's Toffee Latte Cold Brew, a dairy-free cold brew option.

BRB, I'll be stocking up on all of these seasonal holiday creamers while I'm counting down the days until January 2020's Coffee Mate Cinnamon Toast Crunch is in stores.