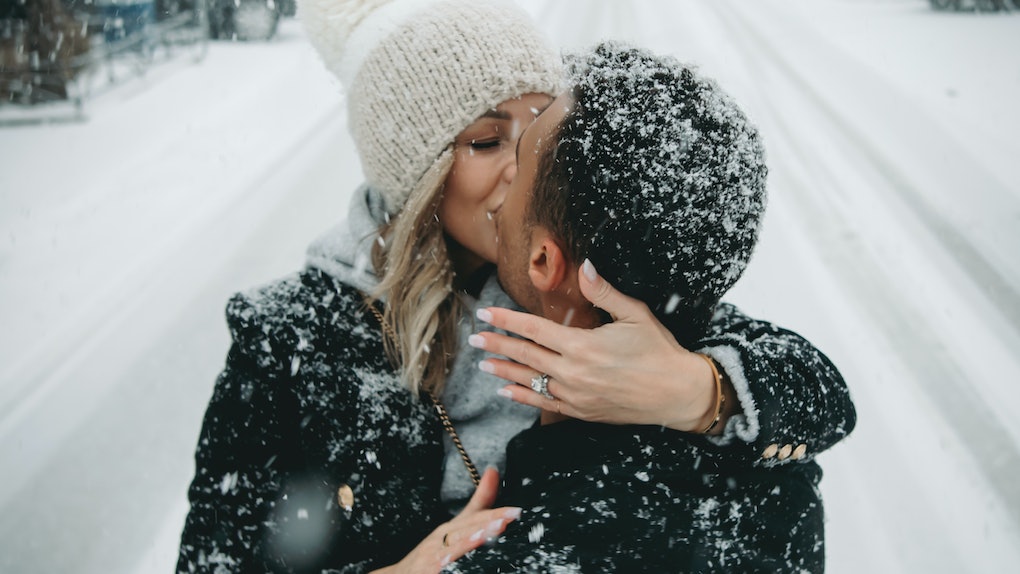 It's only been a couple of weeks since Dale Moss' proposal aired (and Clare enthusiastically said "yes" — obvi), but from their social media activity, it's clear the happy couple is fully embracing their status as fiancés. Fans can't get enough of the romantic photos they've been posting as of late — which, whether you know it or not — can actually offer a lot of insight into their relationship. So, what's the deal with Clare Crawley and Dale Moss' body language on Instagram? Well, according to Patti Wood, a body language expert and author of Snap: Making the Most of First Impressions, Body Language, and Charisma, these pics are packed with interesting little clues about their bond.

Before we dig into the analysis, though, let's review what went down with these two. ICYMI, during week 4 of shooting The Bachelorette, Crawley decided to forfeit her lead role to pursue a relationship with Moss. Then, just as fans had been suspecting, Moss promptly got down one knee and asked her to spend the rest of her life with him (NBD). At the ceremony, Crawley told Moss: "You embody everything I want in a man," and Moss told her he knew they had something special from the moment he stepped out of the limo. "I want nothing more than to keep moving forward and keep being there for you each day," he added. The next day, the couple appeared on Rachel Lindsay and Becca Kufrin's Bachelor Happy Hour podcast, and confirmed that they're not only still engaged, but are also now house-hunting together.

Clearly, Crawley and Moss had an electric connection from the get-go, and that only seems to be building with time. But here's what Wood had to say about their body language in all those recent Instagram posts.

What Wood loves about this photograph — which was shot by photographer Dan Eisenhauer — is the apparent "playfulness."

She points out that Moss is holding Crawley's back up high so that her face can meet his, and his smile his "open and lifted" as he looks into her eyes.

"His energetic hold and her lop-sided one leg up, one leg down [position] show the spontaneity of this moment," says Wood. "I love that it’s not a perfect pose, as it shows their happiness."

Wood notes that Moss's hand looks relaxed where it's placed lower on her thigh.

"This shows he is holding her without strain," she explains. "He is one strong man."

Too Cool For School

According to Wood, this pic is more about them "each looking cool on their own" than it is about who they are as a couple.

"She is doing more of the 'work' to make them look like a couple by putting her head closer and titled up at the top," she says.

Also, notice how Crawley is nervously concealing half of her smile? Wood says that suggests "she can't believe the guy she's got."

In this pic, Crawley is sandwiched between her new fiancé and his sister, Robyn. Unsurprisingly, Wood says that Moss looks "relaxed" with a "warm smile" — after all, he's hanging with two of his undoubtedly favorite ladies.

Wood points out that Crawley still appears to be doing "more of the work" with her arm hooked over his neck and shoulder to pull him in.

However, experts say the eyes are the key to a genuine smile, and according to Wood, Crawley's are "lifted high" to demonstrate lovey-dovey happiness.

Remember this group date? What a whirlwind. It's obvious from this photo alone that the sparks were flying, and the blindfolded duo certainly wasn't shy with their PDA.

"You scare me," Crawley told Moss later that day, referring to her intensifying feelings for him.

"Since I've been here, I've been on cloud nine," Moss told her.

"Her smile is that of a small child about to eat pie," says Wood. "She is so happy — and his hands are holding her head, his thumb out wide and fingers bent around like she is precious present."

Still, Wood also adds that Moss' body is not bent down or curled into her, which could suggest he's not 100% into the relationship yet. But seeing as this was only week 2 of the season, that's not all that surprising.

All About That Ring

Here's the thing about this photograph: when you're highly aware that your proposal is being filmed (and will eventually be televised), your body language isn't likely to be the most natural. Wood says she wishes Moss and Crawley were both leaning into each other a little more with their posture — but as she points out, the way Crawley is angling her hand toward the camera makes it clear that she's just focused on trying to give them a good shot of the ring.

The good news is, Wood notes that Crawley's gaping open-mouthed smile shows she is "jazzed about it," and is anyone surprised? That 4.5-carat stunner features 148 diamonds.

This photograph, which comes from the same previously mentioned shoot with Eisenhauer, is clearly intended to show off the ring — which explains why, as Wood puts it, "Her hand is not holding his head intimately — it's out and away like a jewelry advertisement." So, don't read too much into how they're standing here.

I mean, does this not look like the final scene of a swoon-worthy Hallmark movie? Here's hoping the happy couple has a future filled with IG photos like these to share with eager fans.