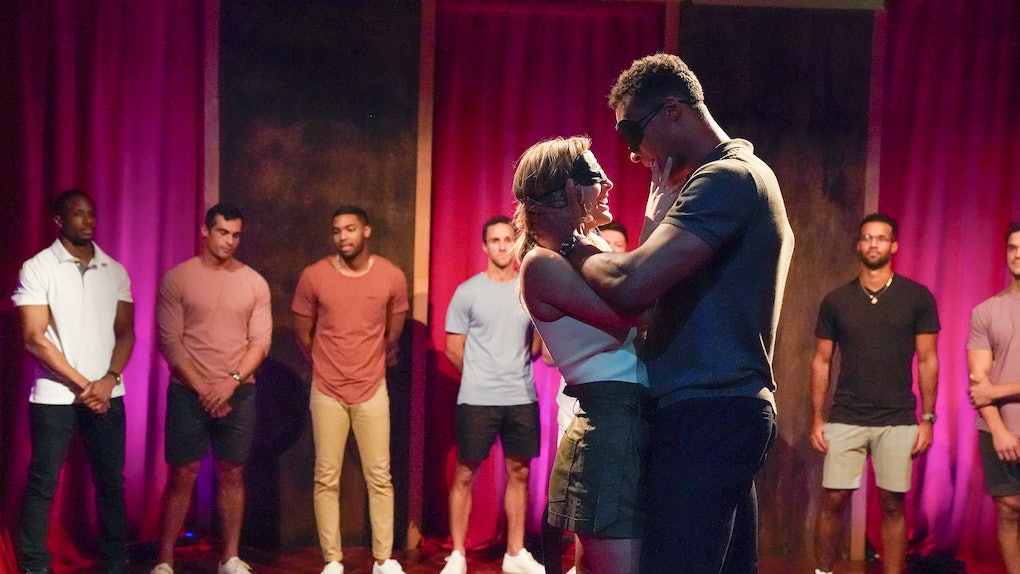 The Bachelorette is fully smitten. During Season 16, Episode 2, Clare Crawley's body language with Dale Moss on the love languages date pretty much solidified him as her number one. If you watched the Oct. 20 episode, you probably already picked up on their steamy vibe, and it wasn't just you. Traci Brown, body language expert and author of Persuasion Point: Body Language and Speech for Influence, took a look at Crawley's body language with all of the contestants on the group date, and confirmed her connection with Moss seems to be more "intense" than her dynamic with any of the other contestants.

Crawley's first group date consisted of activities centered around the five love languages: words of affirmation, receiving gifts, acts of service, quality time, and physical touch. The guys had to deliver heartfelt messages of admiration to Crawley for "words of affirmation," select one item from their hotel rooms to gift her for "receiving gifts," and give her undivided attention during the evening portion of the date as "quality time." (There was no activity for "acts of service.") But the "physical touch" portion of the date is where things got hot.

Crawley took turns caressing each guy, both blindfolded, as the other seven looked on. Her chemistry was different with each dude, but where some where awkward AF, others (ahem, Moss) were totally swoon-worthy. Below, Brown broke down Crawley's body language with all eight contestants on the group date. Here's what she had to say.

The connection here isn’t the most promising. "Her arm is across her body, blocking him a bit," Brown tells Elite Daily. "She's pulling away with her right hand. So, this one won't go anywhere."

Is this giving you middle school flashbacks? Thought so. "Looks like [a] junior high dance," Brown notes. "Not a lot of connection here. There's too much space between them and stiffness from them both."

Ivan doesn't seem to be feeling Crawley at all — physically or emotionally. "He's not even reaching for her! So, I'm thinking he's not that into her," says Brown.

Another awkward school dance moment. "They look like they're at the junior high dance," Brown says, noting that they're "really stiff" and maintaining "lots of space between them." Since neither of them are leaning in toward each other, she concludes, "There's just no passion between them."

Brown sees some good chemistry here. "They're both having fun and are doing something really different than the other guys did," says Brown. "She's got a big smile."

Sorry, Zach, but it looks like Crawley's not exactly feeling you like you're feeling her. "He's more into her than she is into him," Brown states. "See how she's leaning away and he's moving in?"

If there's any competition for Dale, it's probably Bennett. "Looks like he's a solid number two," she says. "He's more into her than she is into him. She's leaning away a bit."

For the grand finale, there's this. "Wow isn't this intimate?!" Brown exclaims. "See how close their private areas are together? That's how you know people are romantic."

Clearly, Moss is Crawley's frontrunner. I mean, is anyone surprised? The second he stepped out of the limo, she said, "I think I just met my husband." If that doesn't scream "the one," I don't know what does.