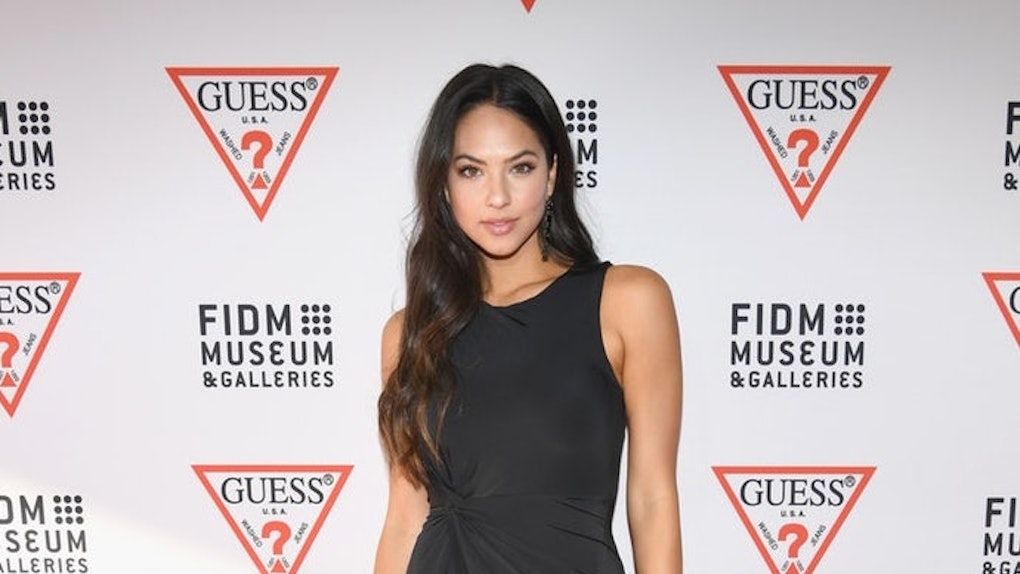 Maybe you're a hardcore Los Angeles Rams fan or you might just happen to really, really like the team's cutest quarterback, Jared Goff (because same). Regardless of the strength of your fandom, you have most likely heard that the team's most desirable QB is rumored to be dating well-known swimsuit model, Christen Harper. And if you're as determined as I am to follow every second of the #drama, you may be wondering if Christen Harper is at the Super Bowl. She has reportedly attended a few games, but did not sit with the athletes family and old friends... so at this point, it is kind of a mystery.

Well everybody, Harper's attendance (or lack thereof) will pretty much confirm all of the rumors. Based on the model's Instagram Stories, it looks like Harper is in Atlanta right now watching the biggest football game of the year. And it can be assumed she's there to watch her rumored-to-be boo play.

The first photo in Harper's Story is a selfie, and she's wearing a denim jacket and black crop top. She looks like a total rockstar (obviously), and added the Atlanta tag with a Rams flag sticker for a little added spirit. It's super cute, so make sure to check it out, below.

The next photo in Harper's Story is a shot of the inside of Mercedes-Benz Stadium. The photo was presumably snapped from her seat (which is practically field side) and TBH I'm mad jealous.

Alright then, there you have it. Harper is at the game, so take that how you want to. For all the guys and gals who fancied Goff from the start, my utmost condolences go out to each and every one of you.

Chances that the two are actually dating, however, are pretty likely, because many inside sources have given intel on it. In fact, a source reportedly told SportsGossip.com, "Jared is hiding her from everyone except some friends. She was at the game last weekend but sat with the Whitworth clan and not his family and friends from home," which may refer to the team's offensive tackle Andrew Whitworth. Once again, neither party has confirmed the rumor themselves, so it still remains up in the air. Neither of them have posted any photos together on social media either, which is kind of a general letdown.

Based on the athlete's astrological sign, Goff is supposedly highly calculated (yet secretly a little bit daring). The 24-year-old was born on Oct. 14, 1994, which makes him a Libra; the air sign is all about balance, stability, and most importantly, justice. They also happen to be highly emotional and super loyal. And while the Libra is all about equilibrium, they are also known for making bold and brave moves to meet their goals. With that, though, they aren't known to blindly leap towards much of anything — in fact, they tend to do ample research before making any big moves. Apparently, this is extremely evident in how they act in their romantic relationships, so good for Harper.

So there you have it, y'all. It seems as though Goff and Harper totally are dating. It is still unconfirmed in real life, but based on the model's attendance, it appears the two of them are together. Either way, though, the dedicated and daring QB definitely deserves to be in a happy relationship with the right girl, so I — personally — could not be happier for the two of them.

More like this
Lamar Odom's Quotes About The Kardashian Family Curse Do Not Hold Back
By Brandy Robidoux
Prince Philip, The Duke of Edinburgh, Has Died At The Age Of 99
By Noelle Devoe
Alex Rodriguez's Instagram For His Daughter's Birthday Contains Two Jennifer Lopez Photos
By Candice Jalili
Stay up to date