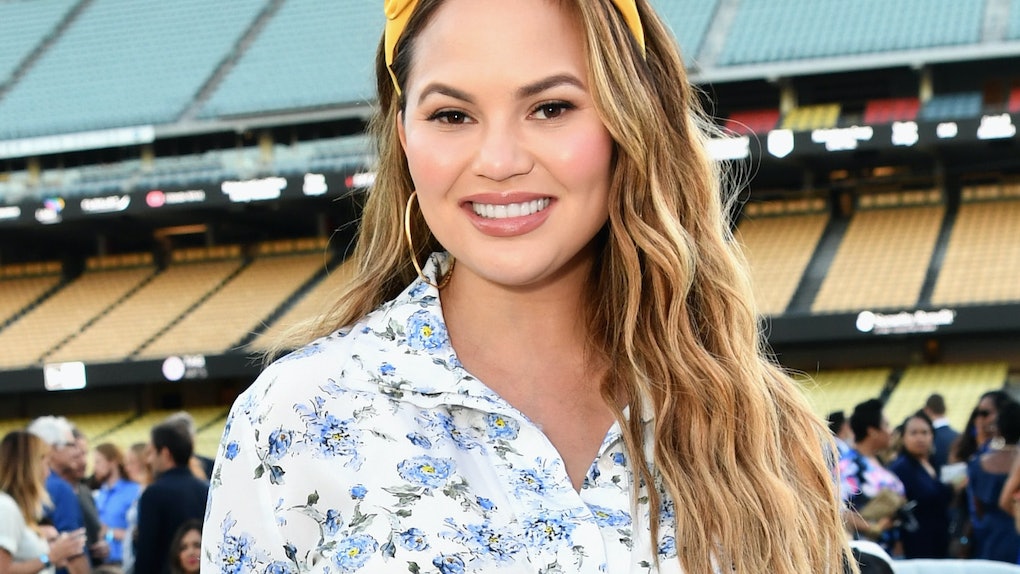 Chrissy Teigen deals with mommy-shamers a lot. Anytime she (and any celebrity mother, really) posts a photo or video of her children, Luna and Miles, some troll has something to say about what they feel she's doing wrong in the comments. Nevermind that they don't know the context of the photos and don't see the measures she takes to care for her children outside social media — they just see what they see what Teigen posts and assume they know everything about how she parents her children. Chrissy Teigen's comments about mom-shamers online show she's done being made to feel small and incompetent because of strangers who think they have a right to judge her as a mom. "It makes you think twice about ever posting a photo or a video of them," Teigen tells me in an exclusive interview for Elite Daily. "They're just watchdogs." A pretty great nickname, if I do say so myself.

Teigen doesn't need "advice" from people online who don't know the context of her life offline. She and John Legend, like any other parents, go to great lengths to give their children the best care possible. That's why she's working with Pampers Pure on its #PureGoals campaign. The campaign encourages parents to share the "relatable, unique, funny and sometimes emotional stories" of them going above and beyond to give their babies the best upbringing possible. The Pampers Pure collection features baby wipes and diapers that are free of parabens, latex, fragrances, and chlorine bleaching, so the products are much gentler on a baby's skin and the production of the products is much more sustainable.

It's almost like you hear their fingers just melting, they’re so sad they can't know it all.

Teigen says she's excited to connect with other parents on this campaign since she feels new to the parenting world. "It's a very cool thing," she tells me, "to be able to scroll through and see these other experiences of parents and know that we're not alone in wanting to give our kids the best thing for them, no matter what it takes."

Although she frequently calls out mom-shamers on Twitter, Teigen tells me the comments still stick with her when she signs off. It makes her meticulously examine every photo she wants to post because she doesn't want to risk the trolling. "It's a safety thing, I get it," she says, giving trolls too much credit, but "you second-guess every move you make."

She continues, "Truly, I have to zoom in on every photo I take and make sure that her shoes are on the right feet, or else it's going to cause some kind of destructive bone disease on her big toe."

Teigen's a seasoned expert at dealing with trolls now that she has two children. Her method? Troll the trolls before they can troll you. "I just joke about it in the caption now," she tells me. "I think it's good to get to it before they do because then they can't say anything," she adds. "It's almost like you hear their fingers just melting, they're so sad they can't know it all."

She still has her vulnerable moments when she struggles to adjust to mom life, though — and there are a lot of firsts she and Legend still have to experience. Case in point: Luna starting school.

Their daughter had her first week of preschool the week of Aug. 20. Teigen revealed in a hilarious tweet that she projectile vomited at Luna's orientation.

hello everyone from Luna's school orientation today. im sorry I projectile puked caffeine upon arrival. couldn't open my eyes and had the noisiest newborn in the room. (not a joke, very sorry, see you tomorrow)

Some people responded to Teigen's tweet with supportive comments assuming it was her nerves about Luna starting school that made her throw up at orientation. "It was so sad," she tells me, cracking up as she says it, "because I wrote that tweet and then everyone was like, 'Don't worry, mama! Hang in there! It's going to be fine,' and I was like, 'Oh, no, no, no, no, this has nothing to do with... this isn't jitters.'"

She continues, "I went to a comedy show, then I went to Korean barbecue. I had two glasses of wine, which for me, nowadays, is like I had 10 tequilas or something, so I woke up that morning and I was like, 'Oh my gosh I feel like crap.'" Basically, she had a mini hangover and the new experience of orientation was just a lot for her to handle. "I'm around the same 10 people every day of my life," she laughs, "so the orientation thing with 100 parents was really new to me and it was just very overwhelming, so my body physically could not hold it, I think."

Luna wasn't at the orientation, she tells me, so she wasn't there to see her mom's embarrassing moment, which she tells me happened "in... and around a toilet." When you're a parent, it doesn't matter how hungover you are, you're going to your toddler's preschool orientation.

And that's what the whole #PureGoals campaign is about. Parents put themselves through countless obstacles for the sake of their kids. Legend, for example, will take Luna to the recording studio with him so they can spend time together before she's tucked into bed at 6:30 p.m. (Luna had to approve every song on Legend's upcoming Christmas album before it could be considered finished, Teigen tells me.)

"Whether it's me signing up for a preschool 40 minutes away when there are a million right around the corner from us," she says, "you just know your child and you know what's best for them. And while it might not be the easiest thing for you, you don't want to compromise." Chrissy Teigen is "that mom," and she's proud of it.