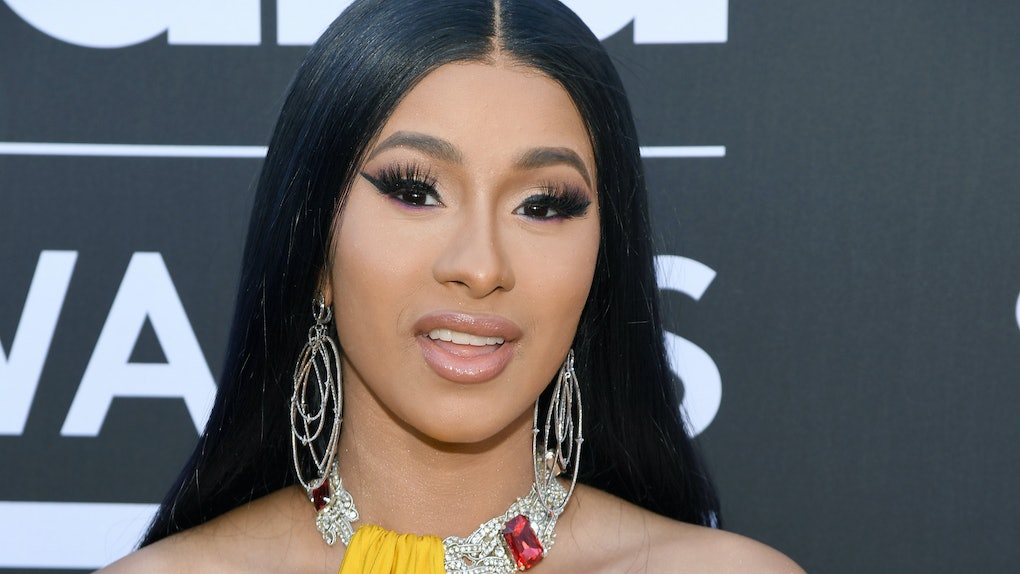 Cardi B just proved she's a major Selena Gomez fan. Days after the "De Una Vez" singer announced she was thinking about retiring from music, the rapper shared her reaction to the news on Twitter, explaining she was just as against the move as anybody else. You need to see Cardi B's response to Selena Gomez possibly quitting music because it's so supportive.

In case you haven't heard Gomez's retirement comments yet, here's what she told Vogue during a March 9 interview: "It’s hard to keep doing music when people don’t necessarily take you seriously," she admitted. "I’ve had moments where I’ve been like, ‘What’s the point? Why do I keep doing this?’ ‘Lose You to Love Me’ I felt was the best song I’ve ever released, and, for some people, it still wasn’t enough."

The reason Gomez thinks people don't see her as a real artist is because of her Disney Channel days. From 2007 to 2012, she starred on Wizards of Waverly Place and although it's been nearly a decade since she left the network, she feels she can't ever escape her kid-friendly image. "I still live with this haunting feeling that people still view me as this Disney girl," Gomez said, adding she wants to retire from music and give herself "a real shot" at acting.

Gomez explained after Revelación, she might give music "one last try" before quitting for good. "I think there are a lot of people who enjoy my music, and for that I’m so thankful, for that I keep going, but I think the next time I do an album it’ll be different," she explained.

Cardi B noticed Gomez's comments, and shared her thoughts about her plan to quit music on Twitter. "I don’t think Selena should retire. She makes good music & her fans love her," the rapper tweeted on Thursday, March 11. However, Cardi B said if Gomez really plans on retiring, she should at least go out with a bang by doing an "edgy" era no one has seen her do yet. She suggested, "A bad b*tch era is needed tho 'A b*tch I’m nice sweet girl but I’m a rich bad b*tch too.'"

Cardi B also said if Gomez retires, it should be because it's something she actually wants to do and not something she decided because of pressure from haters. "I defend her cause she is such a sweetheart in person. Us celebs get picked apart all the time but she is just to sweet to go thru that. If she wants to leave, leave cause you want too not cause of these f*ckers," the rapper said.

Thankfully, Gomez didn't confirm if she's officially retiring just yet. Fans can still enjoy her music with the release of her new album Revelación on Friday, March 12.