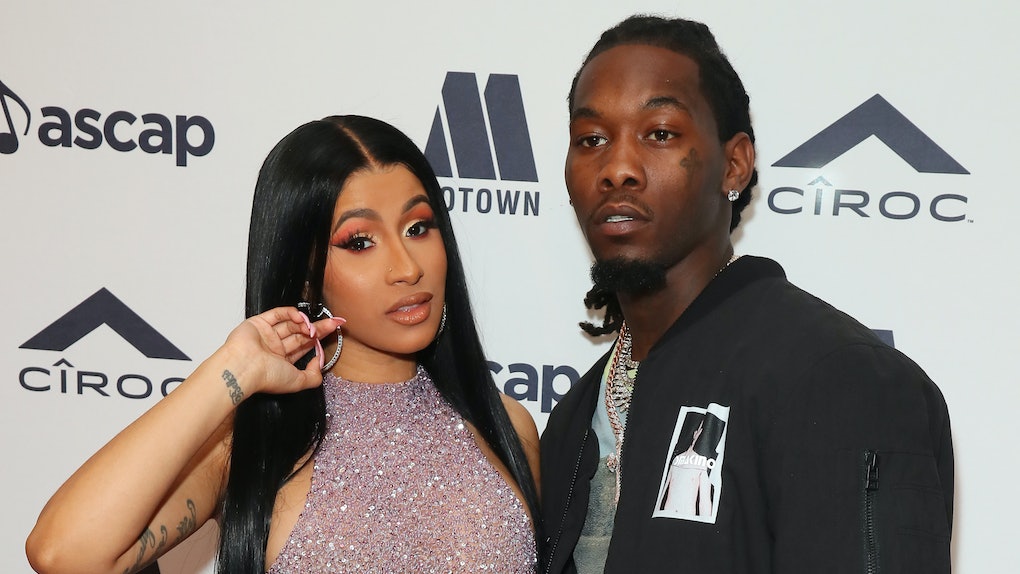 When news broke Cardi B was filing for divorce from Offset on Sept. 15, fans were devastated, wondering what could have possibly gone wrong. Infidelity rumors have plagued the couple's relationship for years, so some assumed cheating was the reason behind their split. However, others had a different theory. Since Cardi B released her Anitta collaboration just days after news of the split broke, some believed the whole situation was meant to promote her new single. Of course, the rapper couldn't stay silent about the ridiculous accusations. Cardi B's response to rumors she's divorcing Offset for attention was the ultimate clapback.

On Monday, Sept. 21, Cardi B went on Instagram Live to address the speculation surrounding her divorce. First, she told viewers she heard a rumor their breakup was caused by Offset getting another woman pregnant. "This is where the sh*t came from. Ain’t that about a b*tch," she said. "That is why I be telling y’all to stop believing what people be saying."

The rapper also spoke about the suspicions surrounding her Anitta collaboration for "Me Gusta," which released on Friday, Sept. 18 — three days after TMZ reported Cardi B filed for divorce from Offset with the Fulton County Superior Court in Atlanta.

"I want to address another bullsh*t that I heard. Another blogger claims that I am getting a divorce for attention. You think I’m going to pay a lawyer 20 thousand f*king dollars?" Cardi B said. "They’re like, ‘I just find it so funny that Cardi is getting a divorce around this time she got a record called ‘Me Gusta’ out.'"

The rapper said the accusations didn't make any sense. "First, of all, ‘Me Gusta’ is not even my record, it’s Anitta‘s record. So I’m not even getting a huge piece of the song," she explained, adding Offset is still her family and she wouldn't do that to him.

"I get along with his mother very well. You think I’m gonna do that to her son for attention? Why do I need attention? You don’t see I have millions of f*king followers? Do you see that I have the No. 1 song in the f*king world?" Cardi B continued.

In another IG Live from Sept. 18, she revealed her reason for divorcing Offset wasn't actually as dramatic as fans thought. "Sometimes people really do f*cking grow apart," she said.

At the end of the day, she just wasn't happy anymore. That's all there is to it.