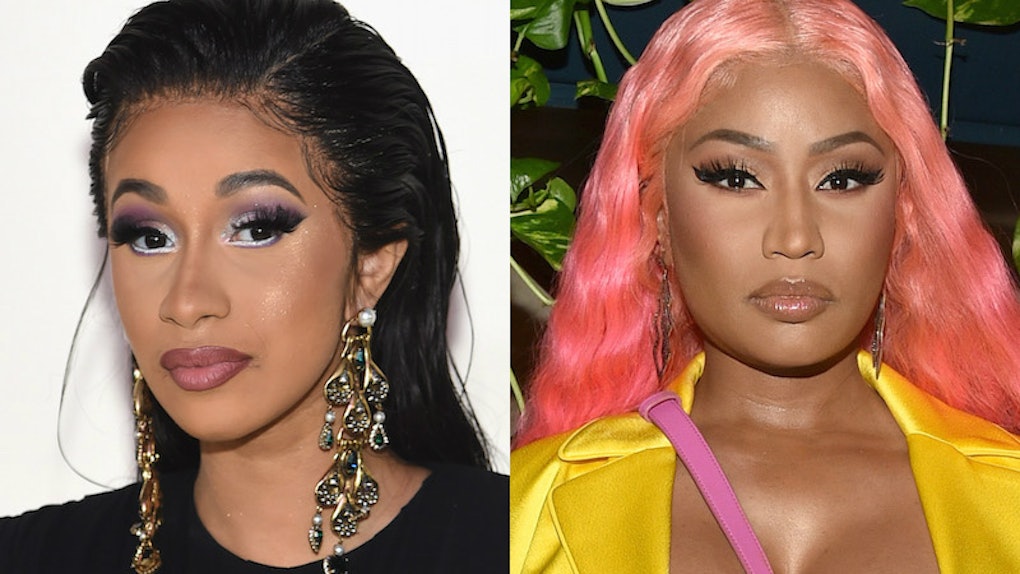 The Cardi B/Nicki Minaj feud has gotten even deeper. Minaj recently accused Cardi of boosting her music's sales via payola, which is the illegal practice of paying radio stations under the table to play your music in order to boost its success. The "Barbie Dreams" rapper said on Queen Radio earlier this week, "I didn’t stop anyone’s bags. [Cardi B] had to say that because she has built her career off of sympathy and payola." And now, Cardi B's response to Nicki Minaj about the payola claims is here and it's pretty blunt.

The Invasion of Privacy rapper posted a throwback video to her Instagram on Sept. 12 of her performing on her first-ever tour back in 2016. She wasn't signed to any record label and her music wasn't playing on any radio stations at the time, according to her post, but her music sales were still successful enough to send her on her first tour. She doesn't mention Minaj by name in the caption, but it's clear whom this video is directed toward.

7/29/2016! NO LABEL ,NO RADIO PLAY,FRESH OUT OF LOVE AND HIP HOP,ONLY 200K IN MY BANK ACCOUNT ,MY FIRST TOUR !!!nobody can make you feel like you cheated yourself or you don’t deserve to be where you at when you KNOW YOU WORKED YOURSELF TO THE TOP !!! THANK YOU BARDIGANG !YOU BEEN HERE SINCE THE GET GO!

The video is pretty electric.

Cardi and Minaj came up in the rap world really differently. While they both had to work hard for their success, Minaj was taken under Lil Wayne's wing, giving her the final leg up she needed. Cardi's rise was different, as she was never picked up by an already successful rapper to help shape her way, but rather gained more of an audience on the VH1 reality show, Love & Hip Hop. That's not to discredit Minaj's success because it's entirely her own, but saying Cardi effectively cheated her way up when she worked just as hard as anyone else is really misguided.

Their feud came to a climax when Minaj and Cardi got into a fight at the Harper's Bazaar ICONS party on Friday, Sept. 7. Cardi reportedly approached Minaj's table at the event and reportedly told Minaj to stop talking sh*t about her as a mother. Later at the party, Minaj reportedly stepped on the train of Cardi's dress and that's when the reported fight went down. Videos of the aftermath of the fight show Minaj surrounded by her security and Cardi surrounded by hers, but Cardi wrestles with the security to try and get to Minaj. She ends up throwing a shoe at her, but Cardi also walked out of the party with a huge welt on her forehead. Elite Daily reached out to Cardi and Minaj's teams for comment on the reports about their fight, but did not hear back by the time of publication.

After the fight went down, Cardi posted on Instagram calling out Minaj. "I've let a lot of sh*t slide!" she said. "I let you sneak diss me, I let you lie on me, I let you attempt to stop my bags, f*ck up the way I eat! But when you mention my child, you choose to like comments about me as a mother, make comments about my abilities to take care of my daughter, is when all bets are f*ckin off."

Minaj said on Queen Radio after the fight that she would never speak ill of someone's child, seemingly forgetting that she literally put Kylie Jenner and Stormi on blast just a few weeks ago. "I would never talk about anyone’s child or parenting. I don’t care about anyone’s parenting,” Minaj said on Queen Radio of Cardi’s claims. “I am not a clown, that’s clown sh*t."

It looks like Cardi has a solid clapback for everything Minaj has to say about their fight, so who knows how long this saga will continue.