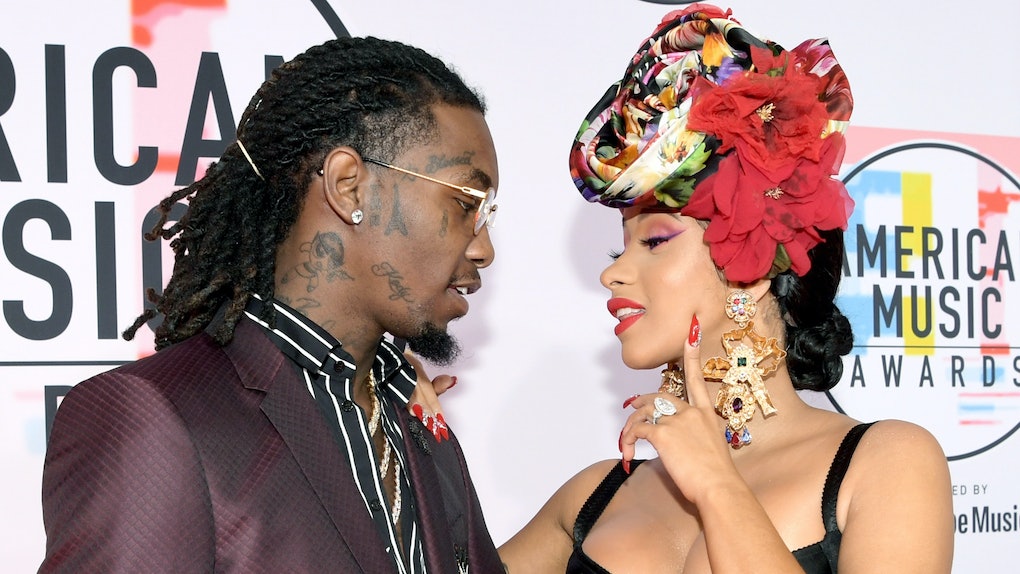 Don't play games with my heart, Cardi B! If you're getting back together with Offset, you have to make it explicitly clear so I can celebrate accordingly! The two rappers have stayed in what sources are saying is "constant communication" since their breakup at the end of 2018, and by the looks of Cardi B's Instagram shoutout to Offset, the fire clearly hasn't burned out completely. Fans know if Cardi truly had any serious remaining bad blood with Offset, she wouldn't go anywhere near his feed let alone post a picture with literal hearts all over his face. That's right, I said hearts.

On the morning of Tuesday, Jan. 22, Cardi B posted a snapshot of a FaceTime session she was having with Offset and their baby girl, Kulture Kiari Cephus. Cardi covered Kulture's face (despite having revealed her daughter's face for the first time shortly after announcing her split from Offset), but even still, Cardi B's screenshot is so, so sweet. In the image, Offset is clearly kissing their baby girl (who is rocking some serious florals, btw).

Cardi went so far as to caption the photo, "I want to go home" and posted multiple heart emojis on the picture including one over Kulture's face and one on Offset's forehead.

Like, of course this screenshot is going to add fuel to the rekindling-romance-rumors fire. (Wow, great wordplay.)

In addition to that, sources told US Weekly the two are talking all of the time, "for their daughter as well as because they love each other." The insider added, "Cardi is focusing on Kulture and her work, but has such a deep love for (Offset), there’s a very good chance they could be fully back together very soon." Elite Daily reached out to both Cardi B and Offset's teams for comment on their level of communication but did not hear back by the time of publication.

Even when Cardi B announced that she planned to divorce Offset, she made it clear there was still nothing but love between her and the Migos rapper. At the time, she explained, "We're really good friends and you know we're really good business partners... I'm always gonna have a lot of love for him because he is my daughter's father."

Additionally, the two spent the holidays together in Puerto Rico, which Cardi B talked about openly on Facebook Live. According to her, they weren't getting back together at that time, she just needed to "get f*cked."

She went on to explain how she felt "rejuvenated," "baptized," and like a "brand new f*cking woman" after their time together. Elite Daily reached out to both her and Offset's team regarding their trip but did not hear back by the time of publication.

Honestly, you've got to hear the story from her to get the full effect.

Fans are crossing their fingers in hopes that this isn't the end of this fabulous duo. They're just so much fun together! Based on Cardi B's screenshot, it looks like we don't need to give up hope just yet.