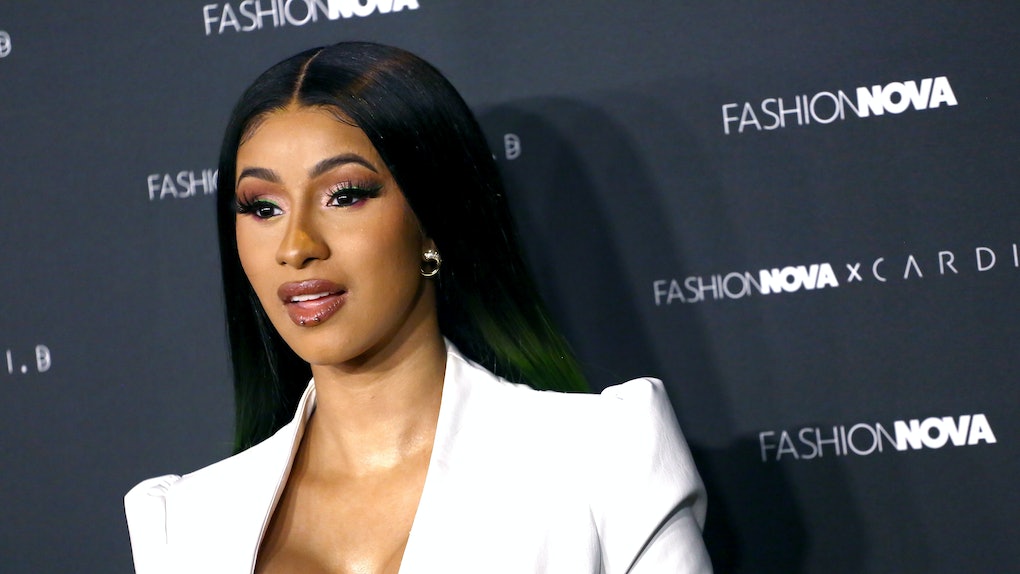 Cardi B's Comments About Getting Liposuction Keep It So, So Real

Leave it to your girl Cardi B to keep it so real. The famed rapper, new-ish mom, and red carpet stunner is not one to shy away from the truth and is an open book about virtually every aspect of her life. This includes letting fans in on any work she's done to her body, pre and postpartum. Cardi B's comments about getting liposuction are the most recent example, but she's also spoken candidly about getting a breast augmentation after her daughter Kulture was born and receiving butt injections prior to skyrocketing to mega-fame.

According to Cardi B, she recently doubled up on procedures, opting to get liposuction shorty after getting new breasts. While some celebrities might keep this information private in either an attempt to trick the public into believing their radical proportions are natural and/or to avoid discussing the not so glamorous parts about surgery, Cardi B is more than willing to go there. In fact, she thinks the public should know exactly how difficult procedures like liposuction are on one's body.

The weekend before Cardi B rocked the 2019 Met Gala red carpet, she performed at the Beale Street Music Festival in Memphis, Tennessee. There, she exclaimed to concert-goers, "I shouldn't really be performing. I should've canceled today because moving too much is gonna f*ck up my lipo." However, a true professional at heart, she added, "But b*tch, I'm still gonna get this mother f*cking money back, let's go!"

Having never received liposuction personally, my immediate reaction is to be incredibly nervous for her, but what do I know?

Later in the week on Wednesday, May 8, Cardi B spoke with Entertainment Tonight's Katie Krause at the launch of her new Fashion Nova line about her decision to open up about her surgeries.

"I want to explain to people how hard it is to process," she said. "I feel like people look at girls on Instagram and go, 'Oh, they got their lipo done and it was so easy.' It is just such a long, hard process, almost like the same process as after you give birth to a baby and you see your body change and snapping it back."

A week or so prior to the fashion launch, Cardi B spoke with Krause again, this time at a campaign photoshoot. There, she talked about the decision to get her breasts redone. She told Krause, "I just got my boobs redone. I feel good, but then sometimes I feel like not, you know? [When] your skin is stretched out."

I've also not had my boobs redone, but that sounds uncomfortable. Cardi B reportedly joked, "Yes, my daughter f*cked me up! She did, she so did."

Still, neither of these stories compare to her illegal butt injections. In a pretty frank 2018 interview with GQ, Cardi B painted a vivid picture of what it was like receiving butt injections in a woman's basement in Queens, New York.

“They don’t numb your ass with anything,” she said. “It was the craziest pain ever. I felt like I was gonna pass out. I felt a little dizzy. And it leaks for, like, five days.”

Apparently, the woman who administered the butt injections allegedly went to jail according to what Cardi heard. "The lady got locked up ’cause she’s supposedly killed somebody. Well, somebody died on her table,” she said.

Cardi, you are braver than me, girl.