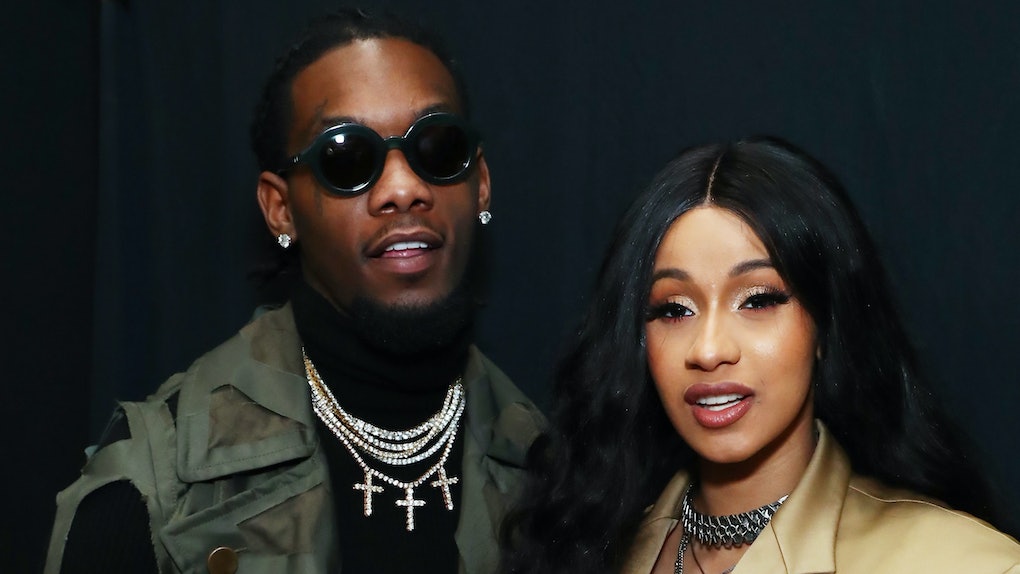 Cardi B's Christmas Plans Include Offset Now, According To Reports

Cardi B and Offset are having a bit of a moment right now, and not in the best way. A few weeks after announcing their impending divorce, Offset interrupted Cardi's performance at the Rolling Loud Festival in L.A. to beg her to take him back. On his birthday on Dec. 14, he posted a video on Instagram asking the same thing of her. Previously, it wasn't clear if Cardi was going to let Offset be around for their daughter's first Christmas, but now, Cardi B and Offset's Christmas plans have reportedly changed. Elite Daily reached out to Cardi and Offset's teams for comment, but did not hear back by the tie of publication.

A source told E! News that while the "I Like It" rapper still has a lot of love for Offset (she said so herself in the video announcing their split), she "ultimately lost trust in their relationship." The two reportedly split because Offset cheated on Cardi. In a video he posted on his birthday (Dec. 14) begging Cardi to take him back, Offset admitted the infidelity rumors are at least partially true.

"I apologize. I am sorry for what I have done to you," he said in the video. "I didn't f*ck that girl, but I was entertaining her, you know what I'm saying? I apologize, and I love you, and I hope you forgive me. My birthday wish is just to have you back."

A source had previously told TMZ that Cardi was still on the fence about whether or not she would let Offset spend Christmas with her and their daughter, Kulture, given the state of their relationship. But now, she has reportedly changed her mind.

"Cardi B wants Offset to be a part of Kulture's life and wants him to spend Christmas with his daughter," the source told E! News. "It's Kulture's first Christmas and it means a lot to Cardi to have the family together."

TBH, I'm pretty surprised Cardi is even entertaining the idea of being in the same room as Offset right now. After the stunt he pulled this weekend at Rolling Loud, I would be benching that dude for a long time.

On Dec. 15, Cardi B took the Rolling Loud Festival stage in L.A. as the festival's first-ever female headliner. Offset, being a man, decided this was the perfect time to make things all about him.

He went on stage with flowers that spelled out "Take me back Cardi." Cardi was not having it.

You can tell in the video that she was not impressed by Offset's stunt, and can you blame her? This was a hella manipulative move.

People on Twitter gave Offset well-deserved flack for the move, saying it was wrong to interrupt Cardi's landmark performance.

Offset responded to the backlash online:

"All of my wrongs have been made public," he tweeted on Dec. 16, "I figure it’s only right that my apologies are made public too. A n**** was just trying .....thank god I ain’t got no balloons sheeesh."

He also tweeted on Dec. 9, "F*CK YALL I MISS CARDI," and commented on Cardi's video announcing their breakup saying "y'all won." He apparently thinks the internet has played a large part in their breakup, but nah.

Anyways, Merry Christmas to Cardi, Offset, and Kulture, I guess?