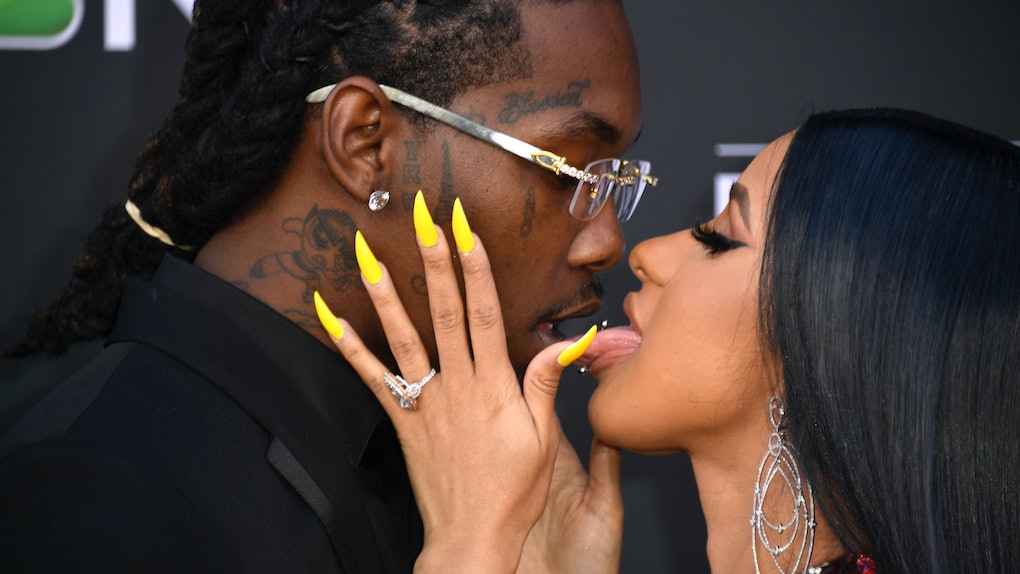 Few couples in Hollywood are as eclectic, charming, and straight-up confusing as Cardi B and Offset. Seriously, the two have gone through more ups and downs than Ross and Rachel from Friends, but their relationship is definitely more interesting than any sitcom on Netflix. If you take a look at Cardi B and Offset's body language at the 2019 Billboard Music Awards, it's clear that they've got nothing but love and super hot chemistry between them.

Looking at these two on the red carpet, no one would ever guess that they were just in the middle of a very public breakup in December 2018. They've clearly come a long way, and the married sweethearts don't appear to be too bogged down by any past drama. Good for them! Cardi B and Offset welcomed their first daughter together, Kulture, in July 2018, and they make a seriously adorable family.

So, when the love birds took the red carpet by storm on Wednesday, May 1, it was no surprise that they also brought the heat. The two were holding each other, smiling, gazing lovingly at one another, and even touching their tongues together.... as you do. They clearly know what the people want! But what do two relationship experts have to say about their red-carpet antics?

For starters, it's important to remember that all of these photos are on the red carpet, which means they're not exactly candid. "We have to remember that both Cardi B and Offset are highly skilled, seasoned, and well-trained performers!" Denise M. Dudley, behavioral psychologist, tells Elite Daily. "So a lot of what they’re doing in these photos is carefully staged."

Staged or not, these photos still say a lot about this fun couple. Here's what experts had to say.

They're focused on the cameras.

This is probably the most tame photo of the couple from the red carpet, but it's still pretty hot. And, according to Dudley, it's because they're getting ready to put on a show.

"He’s focusing and concentrating on his next move, which is about to involve a kiss, a slight dip, and a lower thigh catch with his right hand (complicated stuff!), and she’s encouraging him with her smile — and most likely, she’s also saying, 'Here we go, baby…let’s do this thing!'" Dudley says. "They’re in 'positioning mode' here for the next shot."

But because they'd just started posing in front of the cameras, they aren't as relaxed in this photo as they are in the others. It's almost like they're warming up. "His facial expression is serious and uptight — he is not relaxed in this situation, nor does he seem to be sharing in her happiness at the moment," body language expert Tiffany Toombs tells Elite Daily.

While they might be warming up to the cameras in this photo, as Dudley says, Cardi B is still ready to go with her man!

They were a little awkward.

When I first saw this photo, I thought it was super cute. But the experts suggest that it's pretty staged. "This is clearly a 'photo op' shot, created at the exact right angle for the cameras to catch, directly in front of the 'step-and-repeat' backdrop," Dudley explains. "It’s choreography, quite literally. Nothing natural or genuine about it, but once again, this is not a disparagement. It’s entertainment!" Well, these two certainly are entertaining!

Additionally, Toombs says that Cardi B seems a little apprehensive in the photo. "She appears unsure if he will fully support her," she says. "Her shoulders are tense and she has a tight grip on his shoulders to stop herself from falling if he lets her down."

This is just.... so much. Even with their touching tongues Dudley says they're still not totally connected here. "We can’t see Cardi B’s face here, but Offset’s face is front and center, and here’s what it’s saying: No passion, no excitement, no sense of fun, just focusing on the job at hand," she explains.

This isn't exactly what you would expect from a happy couple, but again, they might just be focused on getting good shots for the camera.

They were still happy to be together.

Ugh, this is probably my favorite photo from their red carpet appearance, because it really looks like Cardi B and Offset are just having a good time and enjoying each other's company. Dudley agrees, saying the two are way more real here.

"Cardi B’s curved, leaning-in body angle, combined with her impish, playful smile is saying, 'We’re here, we’re fabulous, we’ve got some serious cojones, and we’re still a combined force to be reckoned with in the entertainment world,'" Dudley says. "It’s well-executed, and rather predictable."

But Offset looks seriously adorable here. "This shot provides an opportunity to see Offset’s endearing and sincere side," Dudley says. "He looks happy, sweet, and calm. I love him here, because his realness seems to show through."

However, Toombs says that the fact that they aren't standing super close to each other could mean a lot more. "She’s leaning into him, suggesting that she’s more invested in this relationship than he is," she explains.

Cardi Is Taking The Lead.

Finally, as they walked away from the red carpet, Toombs said it was a metaphor for how the two are working toward growing together. "She is in front, leading him, with a smile," she says. "This suggests that she is the one leading the way in repairing their relationship and that she has let go of the past and is leading him to do the same."

Dudley even says that this photo could show fans what the couple is like in real life. "If you’ve ever wanted to see what Cardi B and Offset look like when they’re simply trying to get through life, here you go," she says. "They’re focused on where they’re headed and what they’re going to do when they get there." Stars, they're just like us!

Cardi B and Offset might just be the only human beings on this planet who understand their own relationship, and you know what? That's just fine. It's their relationship, after all, and if they make each other happy, that's all that matters. Here's hoping these two continue to get everyone talking with their red-carpet appearances for many years to come.