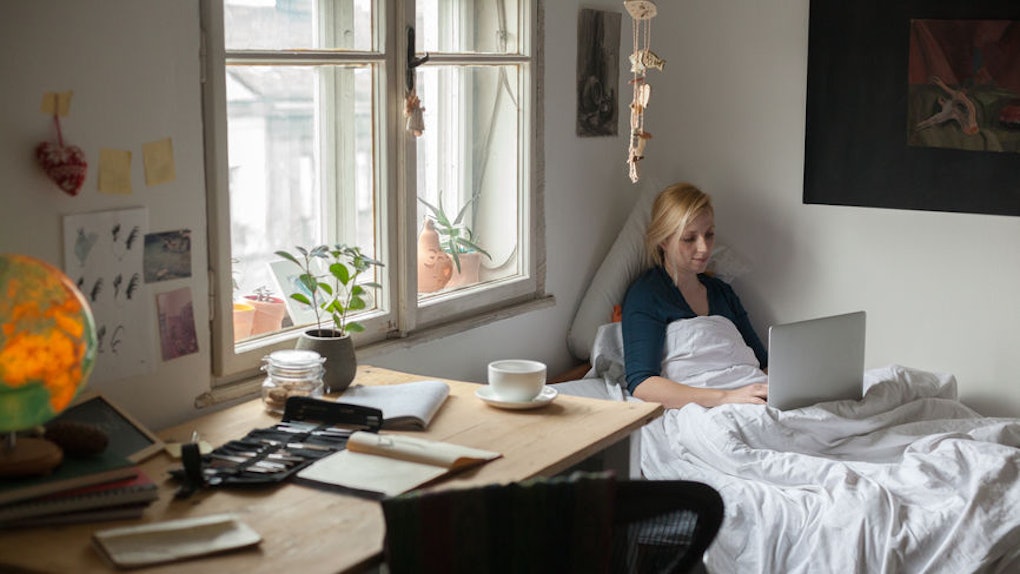 Can Working From Home Cause Stress? Science Says It Can Be More Taxing For Some People

Working remotely is one of those things that's a dream to some people, and a low-key nightmare to others. If you work from home, maybe you constantly find yourself itching to have people to chat with, or feel that it's really hard to stay on track with your work. Or, on the other hand, perhaps you love being able to pad around your apartment without shoes, work from your couch, and not have to talk to anyone (ahem, me). Either way, according to new research, working from home can definitely be stressful, depending on the circumstances.

The new research, which has been published in the European Journal of Work and Organizational Psychology, looked into the effects of working from home on a person's overall well-being. According to a press release, researchers from Baylor University surveyed over 400 employed adults about their self-perceived autonomy (i.e. what they feel their own level of independence is), strain (defined by the researchers as exhaustion, dissatisfaction, and disengagement), and emotional stability. In a statement for the press release, Sara Perry, Ph.D., the study's lead author, explained the meaning of "emotional stability" in this research:

[Emotional stability] captures how even keeled someone is or, on the opposite end, how malleable their emotions are. An example would be if something stressful happens at work, a person who is high on emotional stability would take it in stride, remain positive and figure out how to address it. A person low on emotional stability might get frustrated and discouraged, expending energy with those emotions instead of on the issue at hand.

Now, as per the study's press release, the research seemed to yield three major findings. For one thing, a sense of autonomy seems to play a big role in whether or not someone feels stressed out working from home — which makes sense, right? Working remotely doesn't always mean you're your own boss, but at the very least, it does mean you're largely responsible for how you manage and structure your time, and therefore how efficiently you accomplish your assigned tasks.

Secondly, the press release says that, while a sense of independence does matter a lot for someone who works from home, the study found that workers who scored high on autonomy and emotional stability "appear to be the most able to thrive in remote-work positions." In other words, like Perry explained, an "emotionally stable" employee in this research refers to someone who has a healthy relationship with, and a solid sense of control over, their emotions, such that they don't let these things interfere with their work, at least not on a regular basis. Emotionally stable workers, as defined by the researchers, take stress on the job in stride, rather than allow it to ruin their productivity and focus.

In fact, the study's third major finding, according to the press release, was that workers in the survey who scored high on autonomy but low on emotional stability, were "more susceptible to strain."

Now, it's important to point out that this doesn't mean scoring high or low on emotional stability makes you a "better" or "worse" worker — or that scoring high or low on autonomy makes you a "good" or "bad" employee. Perry actually made a great point about this; according to the study's press release, she said that her team's research contradicts past studies that have suggested "autonomy is a universal need that everyone possesses."

Basically, Perry is saying that it's not realistic to assume so many people can, or even want to work autonomously at home. Some people work well on their own, while others benefit more from having the support of their co-workers. Perry said in a statement,

I would suggest managers look at employee behaviors, rather than for personality traits, per se. For example, if someone does not handle stress well in the office, they are not likely to handle it well at home either. If someone gets overwhelmed easily, or reacts in big ways to requests or issues in the office, they are likely less well positioned to work remotely and handle that responsibility and stress.

In the meantime, if you work from home on the reg and find yourself feeling a bit overwhelmed, remember to find time for yourself outside of your work. Take walking breaks around the block; carve out a self-care space in your home that's separate and apart from where you work. Whatever you do, don't forget to draw the line between work and home, even if both are happening in the same space.