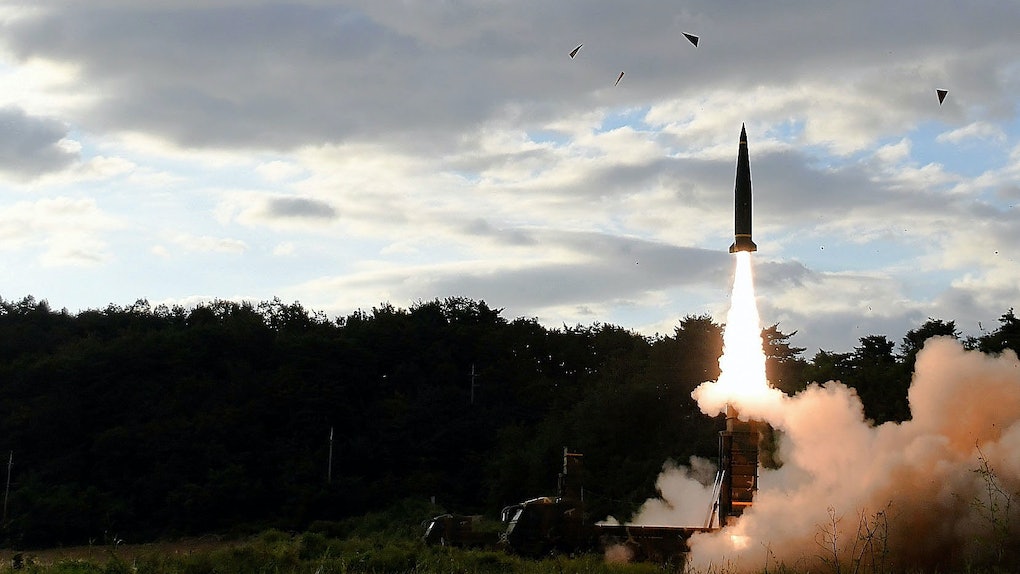 Can North Korean Missiles Reach New York? Its Latest Missile Test Is The Highest Yet

In a year of messed-up-everything, one of the most stressful pieces of news has been the ever-increasing threat of a nuclear conflict with North Korea. Over the past few months, a series of North Korean missile tests combined with bombastic threats between President Donald Trump and the regime of North Korean leader Kim Jong-un have kept everyone on their toes, particularly those Americans who live within striking distance of North Korea. And now the inclination towards nervousness is expanding, as North Korea’s latest missile test could have reached the East Coast of the United States, according to reports.

On Tuesday, Nov. 28 North Korea launched its first missile test in several months, according to The New York Times. The missile was reportedly launched from Pyongsong, northeast of the national capital of Pyongyang at shortly after 3 a.m., and reached an altitude of 2,800 miles. The missile flew for 53 minutes and landed around 600 miles away from its launch site, off the coast of the Japanese island of Honshu. North Korea has test-fired at least 15 missiles so far this year, according to Politico.

Several experts told the Times that the distance traveled would put the missiles in striking range of the East Coast of the United States. David Wright, senior scientist at the Union of Concerned Scientists, told the publication that the missile’s potential range of 8,000 miles would make a strike on Washington, D.C. or other East Coast city feasible.

And Secretary of Defense James Mattis said at the White House that this was the highest-launched missile that we've seen out of the country. "It went higher, frankly, than any previous shots they have taken," he said according to CBS.

On the other hand? North Korea could be fudging its numbers.

Experts told the Times that because the weight of any actual bomb that a missile carries will affect how far it can fly, it’s entirely possible that the missile could have been a shell whose “bomb” weighed next to nothing in order to make it travel farther. In that case, the range of any real, bomb-carrying missile out of North Korea would be much shorter.

“Early calculations suggest that [the missile] could reach the East Coast of the United States,” Daryl G. Kimball, the executive director of the Arms Control Association in Washington, told the publication. “However, that doesn’t take into account the payload mass, which could limit the range.”

So basically, not time to panic yet. No thanks to a stressful summer full of conflict and threats between the countries.

While relations between the United States and North Korea have never been, shall we say, friendly, the latter half of 2017 has been especially hair-raising. On Aug. 8, President Trump responded to a North Korean missile test with an ominous warning: “North Korea best not make any more threats to the United States," he said from his golf club in New Jersey. "They will be met with fire and the fury like the world has never seen.”

North Korea quickly responded by threatening the U.S. territory of Guam, and things haven't calmed down since then. In September, Trump delivered a vitriolic speech at the United Nations General Assembly in which he called Kim by the derisive nickname "Rocket Man," and promised to "totally destroy" North Korea — which replied with the promise of amped-up missile testing and a statement from an official calling Trump's words a "declaration of war." Then, of course, there was the kerfluffle over Kim calling Trump a "dotard," and then Trump putting North Korea back on the official list of state sponsors of terrorism. And round and round we go, folks. The whole thing would be boring in its predictability and pettiness if not for the fact that there are nuclear weapons involved.

Thankfully, this time Trump's reaction seems more restrained. The president told reporters that the U.S. would "handle" the situation, per CNN. "We will take care of it," Trump said. And Secretary of State reiterated that American leaders were looking for diplomatic solutions to the issue. He said that the U.S. "remains committed to finding a peaceful path to denuclearization," but added that "diplomatic options remain viable and open, for now."

Let's hope that they remain open and viable for a long time.