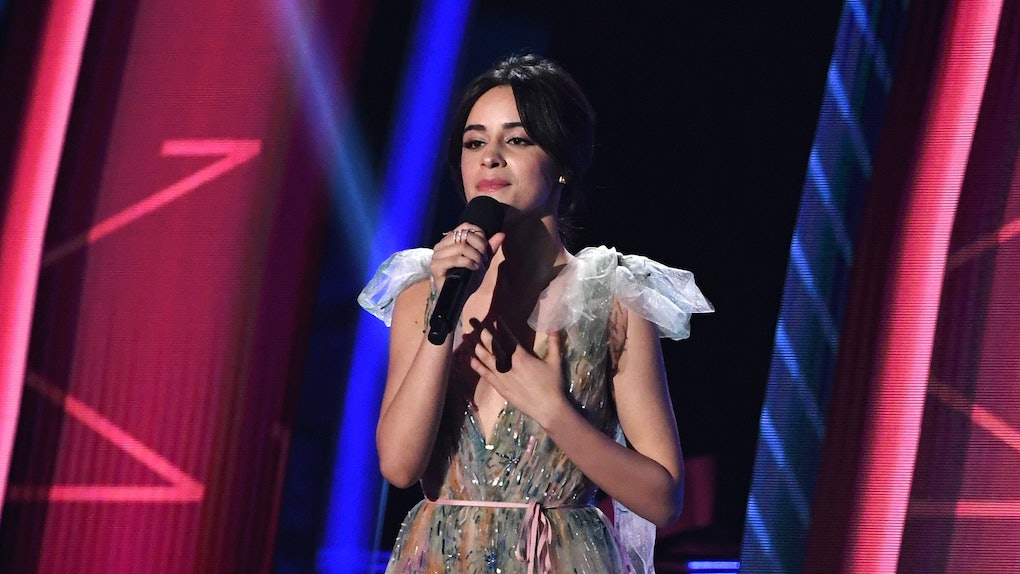 Camila Cabello's solo debut is finally here as her first album, entitled Camila, dropped on Friday, Jan. 12. The album has 10 tracks, but there's one song in particular that seems to be striking a chord. Her song "Something's Gotta Give" is a soft-hearted track that details the struggles of a relationship that's just on the verge of ending, and, TBH, it's a song that nearly everyone who's been through heartbreak can relate to. Camilla Cabello's "Something's Gotta Give" lyrics are hitting us all in the feels, and hitting us hard.

2017 was undoubtedly a major year for Cabello. Her song "Havana" featuring Young Thug made history as it topped Billboard's Pop Songs radio airplay chart for seven weeks straight — meaning it's the longest running song by a solo female in a lead role in almost five years. And, after Camilla Cabello left Fifth Harmony back in 2016, it's exciting to finally see her very first album since that departure. And boy, did she deliver. The first half of the album is what we'd expect: pop-driven, easy, and fun. But the second half of the album is where the ballads take a turn into a seemingly more personal and heartfelt place, which is exactly where the song "Something's Gotta Give" comes in.

If you listen to the song, you'll hear just how painfully accurate the lyrics are, and how much they actually resonate with anyone who's ever argued with someone they've been in a relationship with (aka nearly everyone), and how sad it is when that relationship dissolves right in front of you.

Some of the lyrics go:

Loving you, I thought I'd get no higher

But we could only burn so long

How did we get so far gone?

We should know by now

Something's gotta change, but I know it won't

Is a good reason to go

I have never heard a silence quite so loud

You're good at making me feel small

If it doesn't hurt me, why do I still cry?

If it didn't kill me, then I'm half alive

Wow, those lyrics are so intense (and so relatable).

Listen for yourself below to hear just how heartbreaking but beautiful this track is:

So, while there are definitely some sad and somber songs on this album, there's also a share of lighter, airier ones, too — meaning Cabello is totally versatile and is basically crushing life right now.

In an interview with the The New York Times, Cabello said she realized leaving Fifth Harmony and choosing a solo career was difficult, but ultimately the right thing to do. She said,

I was just curious and I wanted to learn and I saw all these people around me making music, writing songs and being so free, ... I just wanted to do that and it did not work. It became clear that it was not possible to do solo stuff and be in the group at the same time ... if anyone wants to explore their individuality, it’s not right for people to tell you no.

Honestly? Camila is proof that Cabello has certainly made the right choice.

More like this
Olivia Rodrigo's "Deja Vu" Lyrics Are A Brutal Note To Her Ex
By Brandy Robidoux
Demi Lovato & Ariana Grande's "Met Him Last Night" Lyrics Focus On Toxic Love
By Brandy Robidoux
What Do BTS' "Film Out" Lyrics Mean In English? They're About A Past Relationship
By Michele Mendez
Stay up to date