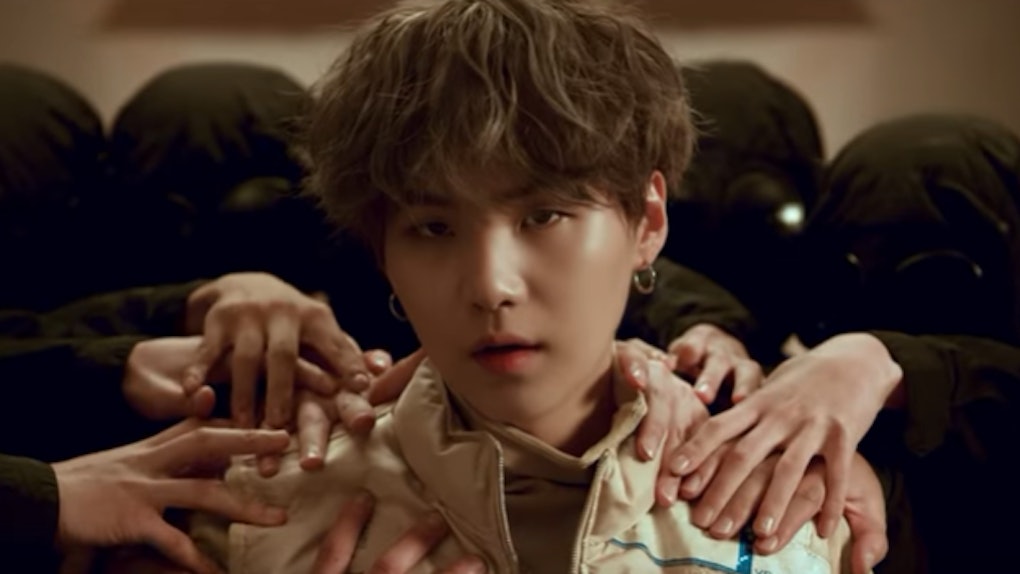 BTS may be following a different comeback schedule in 2020, but they're keeping one thing the same: their comeback trailer, which officially marks the launch of the group's new era. As usual, only one member is starring in their latest one. RM took the spotlight last time, but now it's Suga's turn. BTS' Suga's "Shadow" comeback trailer gives fans a taste of their new sound, and, as expected, his track featured in the trailer is amazing.

Instead of surprising fans with the trailer, BTS gave fans a day's notice to prepare. On Jan. 8, Big Hit Entertainment shared a "comeback map" to help fans navigate the group's new comeback schedule. The map revealed BTS' comeback will be split into four phases, spanning from Jan. 10 to Feb. 28 (that's Jan. 9 to Feb. 27 in the U.S.). Fans were surprised to see several new additions to BTS' comeback strategy, including "Connect BTS" events happening across the globe, a single release before Map of the Soul: 7 drops on Feb. 21, and a music video to cap things off.

Previously, BTS would drop their album, lead single, and music video all at once, so the new schedule initially caught fans off guard. One element of BTS' comeback strategy fans appreciated the group kept the same was their comeback trailer, which marks the start of phase one.

The imagery in Suga's "Shadow" video is pretty intense, featuring shadows in front of doors and hundreds of fans filming him with their camera phones as he raps about the various shadows that follow him in his career.

BTS' comeback trailers would usually feature their upcoming album's intro track, but what's interesting is that, instead of including "intro" in the song's title, it has "interlude." This could mean BTS is giving fans a song in the middle of Map of the Soul: 7 instead.

As for what fans can expect next, BTS "comeback map" reveals several "Connect BTS" events happening online, in London, and in Berlin next week. BTS will then share their first single from Map of the Soul: 7 on Jan. 17. The BTS ARMY finds the single's release date very interesting, since it's coming before the album drops, and they've even theorized it's because BTS may be performing at the Grammy Awards on Jan. 26.

BTS' new comeback schedule is keeping fans on their toes, and ARMYs are definitely prepared for anything the group may announce in the coming weeks.