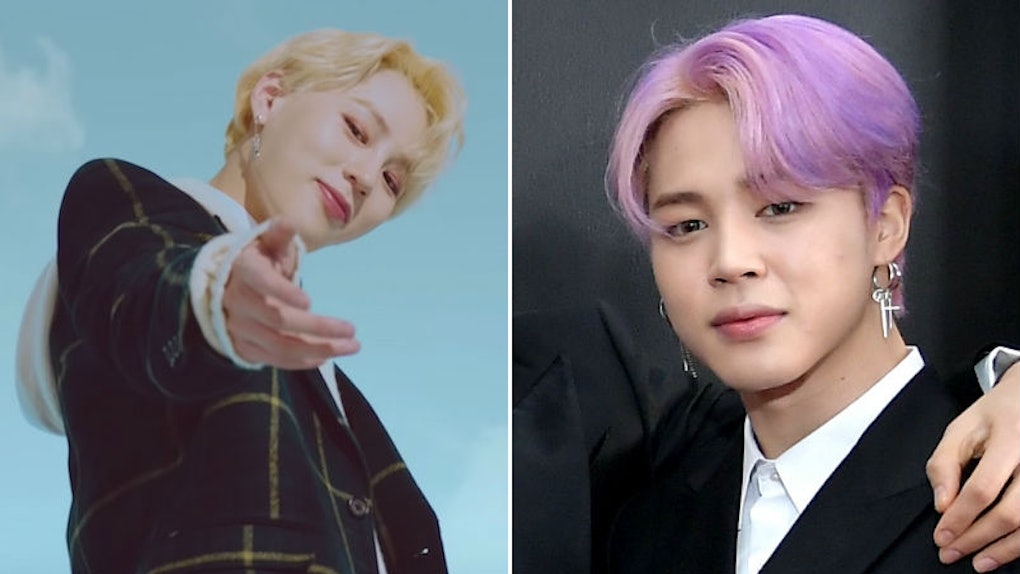 Fans are so in love with these two. BTS' Jimin and Wanna One's Sungwoon are killing everyone softly with their amazing friendship. Most recently, former Wanna One member Sungwoon came out with a new music video called "Bird" and Jimin was like, "Yup! More of that, please!" In true bestie style, Jimin shared it with all of his BTS followers on Twitter. BTS' Jimin's tweet supporting Sungwoon's "Bird" music video is awesome for a few reasons. One, it's just nice to know authentic friendship exists in the extremely complicated and challenging world of K-Pop Idols. And two, how cool is it to see famous artists supporting other famous artists?

Sungwoon is a former member of the now disbanded (but still beloved) group, Wanna One. Wanna One was made up of 11 members and formed on the second season of the competition reality show, Produce 101. Their agency, Swing Entertainment, released a statement explaining the group was never meant to be together forever, and their exciting run came to an emotional end in January 2019. Now, it's time for Wanna One's members to branch out into their own solo careers.

Sungwoon's "Bird" music video is a joyful romp through a sun-filled set. He dances in clouds, sings to a bird, and floats in a little lovely boat. If you were a fan of Sungwoon when he was part of Wanna One, there's no way you won't love his solo debut. Now, let's get to Jimin — who thinks "Bird" is freaking awesome, for the record.

Jimin jumped on his Twitter account to share his friend's single and keep the love train flowing. Jimin's tweet translates to, "I’ll support you too, hyung. You worked really hard," according to genius bilingual fans in the replies.

Jimin explaining he'll cheer for Sungwoon "too" is likely in reference to the support he showed another one of his friends from trainee days, Kim Daehoon, on the show NeoMokBo (I Can See Your Voice).

Jimin, you're a real one.

In fact, fans have been following Jimin and Sungwoon's friendship for some time now. Jimin popped up at Wanna One's final concert where fans caught him singing and dancing along in the crowd. After that, he and Sungwoon seemed to go on a trip together where they took similar photos in front of a beautiful sunset and even sang karaoke. Fans are now giving Jimin credit for bringing "Bird" to their attention, with at least one or two folks crediting him for Sungwoon's spike in streaming numbers.

Hey, if you're in the music business, having a best friend in one of the world's most popular groups with millions of fans isn't the worst thing. Though, Sungwoon was doing it up on his own, no doubt.

More like this
TikTok’s Taylor Swift Era Trend Documents Your Throwback Swiftie Evolution
By Rachel Chapman
How To Do Olivia Rodrigo's "Deja Vu" Challenge On TikTok Like Charli & Addison
By Rachel Chapman
With 'Like Water,' Wendy Found Her Biggest Cheerleaders In Her Red Velvet Bandmates
By Michele Mendez
Stay up to date