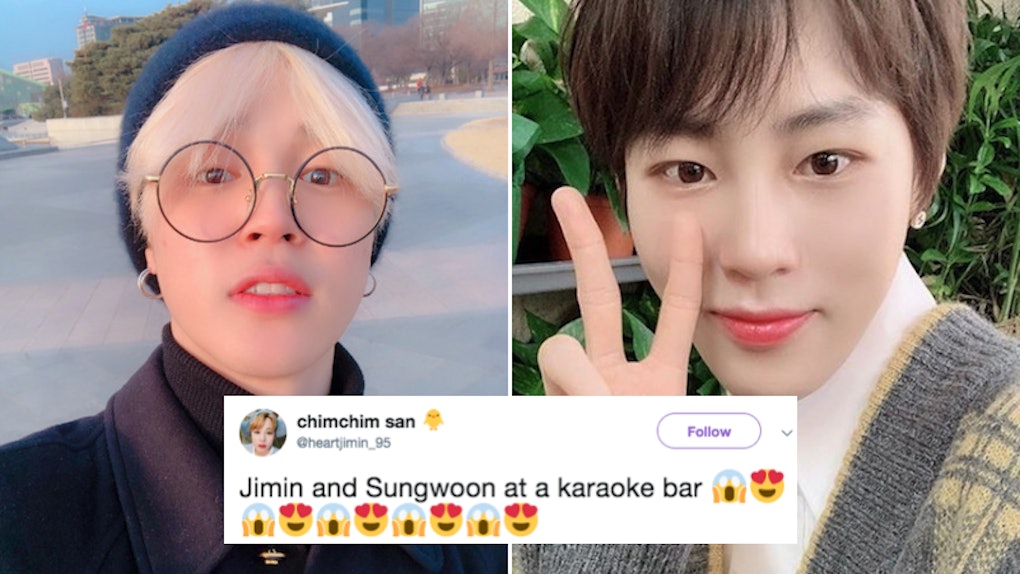 Few things delight me as much as celebrities being friends in real life. While I'm still new to the K-pop landscape, I can see that BTS' Jimin and former Wannaone member Sungwoon's friendship has fans swooning. The guys recently enjoyed a trip together where they took fun photos and even livestreamed a karaoke session. It was, like, almost too good to be true for their fans. The video of BTS' Jimin singing karaoke with Sungwoon is about as pure as it comes and proves that these two idols' friendship goes far beyond simple hugs and smiles at award shows. Fans are soaking it up.

This magic duo isn't new at all. When Wannaone played their final emotional concert, Jimin was there in the audience cheering his friend on. It's interesting because one might think there is competition in the K-pop industry, but these two have proven love and support is actually the way to go.

It's not exactly clear where the boys traveled to, but they certainly seemed to be enjoying the sights. Both Sungwoon and Jimin took pictures of each other in front of a pretty bridge and sunset. In fact, Soompi notes their poses were pretty similar, which means they totally discussed what poses would look best (I'm UwU-ing so hard right now). Jimin captioned his set of photos, "I hope you will receive many blessings in this new year. I hope you will receive them all," according to fan translations in the replies.

Meanwhile, Sungwoon posted almost identical photos of himself on Instagram, but opted out of a caption. Still, fans sounded off in the comments section anyway writing things like, "handsome," "OMG I LOVE YOU," and the fire emoji. Obviously.

While the matching photos were a ton of fun, the real show-stopping moment appeared on Sungwoon's Instagram story. He and Jimin settled in for a little karaoke session that Sungwoon streamed live on Instagram. He chose a psychedelic filter to film as they sang the song "Stalker" by 10cm together. While Jimin is totally off camera the whole time, he can clearly be heard singing with Sungwoon. His voice is pretty unmistakable, after all.

One fan dug up the info on the song "Stalker" and shared that it's currently trending at number one on Melon, a South Korean streaming service.

It's nice to see the boys enjoying themselves, particularly after Wannaone disbanded. During their emotional final performance, each guy from the 11-member group said their final goodbyes before walking off the stage. During his departure, Sungwoon told fans:

Wannable... the eleven of us really don't want to part ways... I'm really thankful and Wanna One really loved Wannables a lot... and you really worked hard, I'm sorry, and I really love you. Goodbye.

This isn't goodbye, Sungwoon! It's just see ya later! With Jimin, in fact!

According to Wannaone's former agency Swing Entertainment, the group disbanded simply because their contract was up, not because of anything dramatic. The 11 members joined as a group after competing on season two of a reality show called Produce 101. Today, they are free to embark on their own solo endeavors (or return to groups they were in before the show) and expand their music careers separate from each other.

Does that mean a Jimin/Sungwoon collaboration? How can we make this happen, ARMYs?!

I'd be satisfied with a BTS karaoke session, tbh.

More like this
Here's Why Harry & William Will Not Walk Together At Prince Philip's Funeral
By Brandy Robidoux
These Tweets About BTS' 'Bang Bang Con 2021' Sum Up The Epic Performance
By Cianna Garrison
BTS' 'The Best' Japanese Album: Release Date, Tracklist, Music Videos, & More Details
By Michele Mendez
Stay up to date