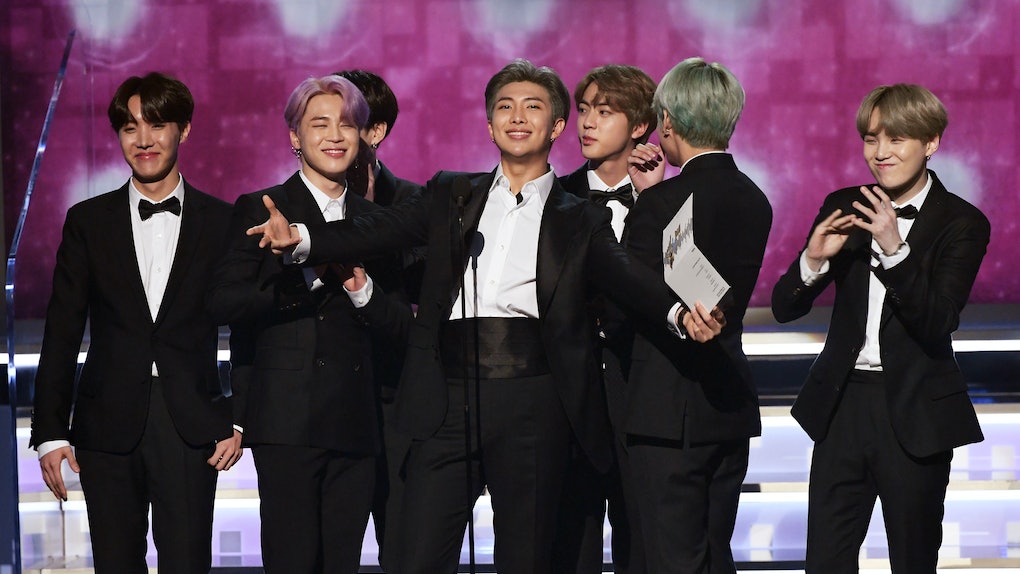 You don't need me to tell you BTS is getting around. The mega K-pop stars aren't just taking the global music industry by storm, the idols are literally taking over the world. As BTS has slowly but surely made its way into the U.S. mainstream, J-Hope, Jimin, Jin, Jungkook, RM, Suga, and V made their way into my heart. Their fanbase, the BTS ARMY, prides itself on their vast knowledge and appreciation for the group, but BTS' Entertainment Weekly interview quotes might reveal some fascinating details even the most dedicated fan didn't know. So strap in, everyone.

If you're like me, you might have a general understanding of K-pop culture. Off the top of my head, I know that becoming an idol is not an easy task. K-pop stars are meticulously trained over long periods of time before stepping into their roles. The industry is extremely regulated and strategically curated so that each group or individual delivers something unique and specific. There's a lot of PR planning that goes into it, etc., etc. However, as often as the boys get super personal in their song lyrics, the one thing the general public might not be as privy to is the inner dynamics within a group — how BTS communicates as friends, what their experience is like as artists, and what it's been like becoming global celebrities.

They break it down in one of their more thorough interviews for the April double issue of Entertainment Weekly as they prepare for the release of their comeback album, Map of the Soul: Persona, dropping April 12. These details are definitely new to fans who have just boarded the BTS ARMY train, but let's see if some of the more nuanced details of their interview can surprise some seasoned ARMYs out there.

Here are a few things that stood out.

1. The boys' Citi Field performance meant so much to them.

Interviewer Leah Greenblatt who had the luck of visiting BTS in their home city of Seoul described Big Hit as a "sleek poured-cement corridors and glass-box conference rooms scattered with well-stocked mini-fridges, plush toys, and the occasional beanbag chair." She said the only "give away" that this was the hub of all things BTS was a "display case stacked with a truly staggering number of sales plaques and statuettes," which isn't that surprising to anyone who watches the boys regularly on V-LIVE.

This little tidbit, however, is: The boys have "a glossy large-scale photo print of BTS at their sold-out concert at New York’s Citi Field last October" hanging on a wall at BigHit.

Looks like making history as the first K-Pop group to play a U.S. stadium was no small thing for our boys.

2. They don't assume everyone knows who they are and get starstruck, too.

This came through when the boys described what it was like going to the Grammys for the first time as presenters at the 2019 show.

Jimin was surprised to run into Shawn Mendes in the bathroom. He recounted the story he told shortly after the Grammys on V-LIVE, sharing with EW, "I was like, ‘Do I need to tell him who I am?’ But then he said hello first, which was really nice."

Jungkook couldn't believe how close they got to the world-renowned Dolly Parton. "She was right there in front of us," he explained. “Amazing."

Is BTS even aware they're famous? I have my doubts.

3. They sometimes split up into smaller groups if they want to walk around in public without being noticed.

The boys revealed they do have a sense of awareness when it comes to how attention-grabbing they are as a group. "I mean, look at us," RM said, "Seven boys with dyed hair! It’s really too much." (No, it isn't. I love it.)

According to BTS, they occasionally sneak out to the movies to do something "normal" without causing a scene, but they always make sure to go to the earliest or latest showing to avoid crowds.

If you can believe it, the seven members have lived together for nine years. Group housing is super common for idols and Greenblatt noted the boys "seem to appreciate the shared stability."

Jimin explained that early on, there used to be a lot more conflict among the boys, but today, he says they've "reached the point where we can communicate wordlessly, basically just by watching each other and reading the expressions."

5. They're not concerned about what they're labeled as within the music industry.

Truthfully, it's hard to draw a comparison to the kind of fame and status BTS has achieved. Sure, there's a sense of mania surrounding them similar to the Beatlemania or 1D-mania, but they are regularly referred to as a "boy band," which is something I'd never call Lennon. RM explained:

6. They can get a little competitive when it comes to songwriting.

According to the guys, each member truly brings something unique to the table. Greenblatt notes some of the members are more hyped for the production aspect of songwriting, while others focus on the lyrics. If anything feels too specific to one individual, they will pass and allow that person to use it for a solo project.

RM explained they have "seven different tastes" which can sometimes make songwriting feel like a competition. J-Hope added, "We’ll write a lyric and decide, ‘This sort of reflects me [more], who I am and my own color,’ so we’ll want to keep that for a solo song.”

Nothing like some friendly competition to get those creative juices flowin'. Ugh. So mature.

7. They aren't willing to compromise their group identity for awards or outside recognition.

One question people are always wondering is if the group will be doing more music in English. RM thoughtfully responded to the question, explaining that there are certain cultural challenges that make finding recognition as an Asian group more challenging in the U.S. "You know, Latin pop has its own Grammys in America, and it’s quite different," he said.

I don’t want to compare, but I think it’s even harder as an Asian group. A Hot 100 and a Grammy nomination, these are our goals. But they’re just goals — we don’t want to change our identity or our genuineness to get the number one. Like if we sing suddenly in full English, and change all these other things, then that’s not BTS. We’ll do everything, we’ll try. But if we couldn’t get number one or number five, that’s okay.

8. Jungkook had a pretty interesting introduction into directing.

In a video interview accompanying BTS' Entertainment Weekly, Jungkook went into detail on what inspired him to start his production pseudonym, Golden Closet Films, explaining:

I have gotten into directing because I used to take still photos. But with still images, people have to look at it and then translate what they’re looking at, but videos are moving so people can translate what the video is right away. That’s why I like video.

Jimin then added that Jungkook created a video of a trip they went on together and he "really liked it," which is seemingly a reference to Jungkook's "G.C.F. in Tokyo" video.

Before leaving, Greenblatt was lucky enough to catch a few moments of dance rehearsal. She describes the sequence she saw like this: "It starts with a rough triangle formation, and an elaborate hip-swivel-into-pelvic-thrust/crotch-grab combo that actually plays much more innocently than it sounds, mostly because they keep stopping to crack each other up."

Hear more about who is the cleanest/dirtiest, what got Jungkook into directing, Jin's favorite nickname, and see J-Hope's favorite dance move in the clip below!

I freaking love you guys.