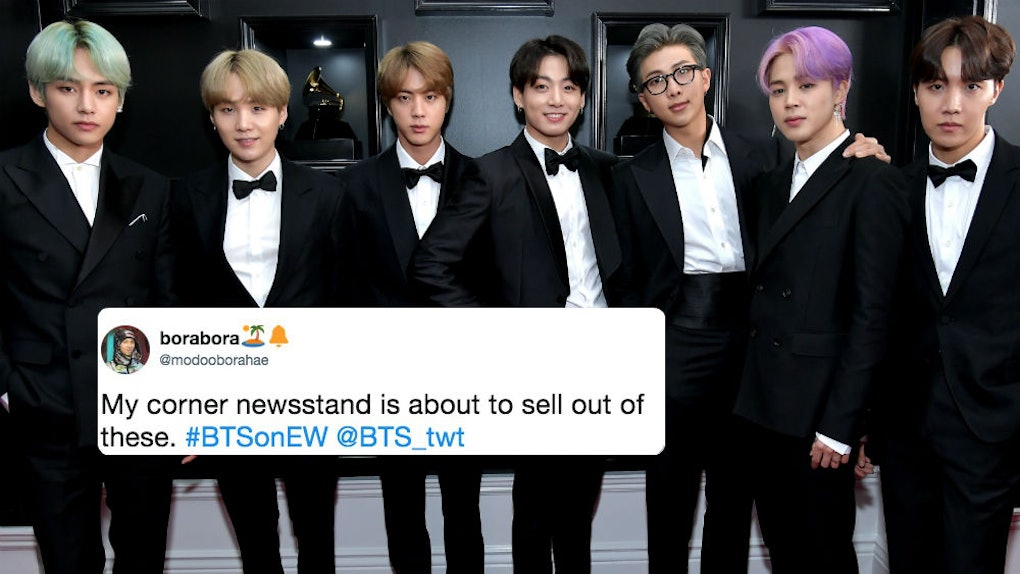 Yo, ARMY: You better head on out to your local newsstand ASAP if you haven't already. Because Entertainment Weekly's special double issue for the weeks of April 5 and April 12 just dropped, and BTS is on the cover. You heard me. BTS is currently covering EW magazine. So if you don't run out and cop a copy or 10 right this very minute, you're probably gonna miss the whole amazing thing. This is so huge, you guys! I mean, it really doesn't get more mainstream in America. And judging by these tweets about BTS' Entertainment Weekly cover, fans are so proud of how far the seven-member K-pop band has come, that scoring one lone copy of this milestone issue just ain't gonna cut it.

And make no mistake — BTS' appearance on the EW cover is a milestone. A major one. I mean, I get that the band is already known for scoring a bunch of barrier-busting firsts. They're the first K-pop band to get to number one on the Billboard album chart, and the first to sell out Wembley Stadium. But now the septet — made up of RM, Jimin, Jin, J-Hope, Jungkook, Suga, and V — is officially the first K-pop group to cover Entertainment Weekly. So you better get ready to frame this baby and hang it on the wall!

Soooo good, right? I mean, all seven members look amazing, and pretty much exactly the way they're described inside the issue — like "avatars of a sort of poreless, almost post-gender beauty who seem to exist inside their own real-life Snapchat filters."

In other words, dayyyyyyum, kings!

Suffice it to say, BTS stans are freaking out on Twitter about this monumental moment, and hell if I can blame them. It's pretty amazing how far these guys have come since BigHit first began putting the band together in 2010.

Inside the issue, which comes just a few weeks before the April 12 release of BTS' upcoming sixth EP, Map of the Soul: Persona, the boys talk about how much they have grown as a septet since first landing on the K-pop scene.

"We’ve been living together for a while now, almost eight, nine years,” Jimin explained. "So in the beginning we had a lot of arguments and conflicts. But we’ve reached the point where we can communicate wordlessly, basically just by watching each other and reading the expressions."

The band also talked about how after scoring two number one albums, they'd love to see a Korean song hit the top spot on the singles chart, the way Spanish-language track "Despacito" by Luis Fonsi was able to. But don't worry, ARMYs — BTS promises they won’t change who they are to get there.

"A Hot 100 and a Grammy nomination, these are our goals," RM explained. "But they’re just goals — we don’t want to change our identity or our genuineness to get the number one. Like if we sing suddenly in full English, and change all these other things, then that’s not BTS. We’ll do everything, we’ll try. But if we couldn’t get number one or number five, that’s okay."

You can read BTS’ full interview over at EW.com.