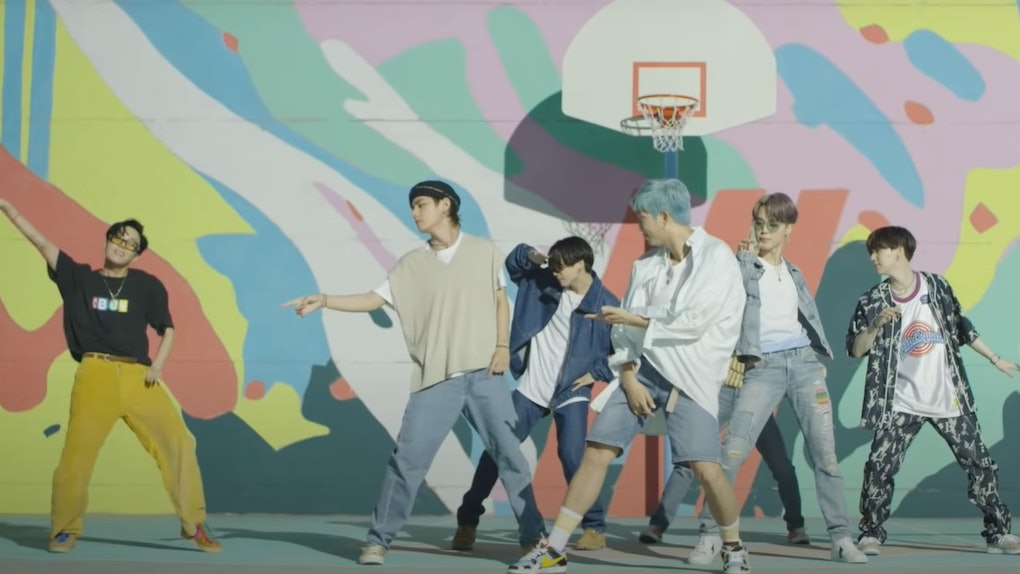 BTS' "Dynamite" Choreography Music Video Will Have You On Your Feet

BTS' latest collaboration was their most unexpected one yet. On Friday, Sept. 25, the guys partnered with Epic Games to premiere an alternate music video for their hit single "Dynamite" on Fortnite. The group had never done something like this before, so fans couldn't wait to see how BTS' "Dynamite" choreography music video turned out. Now, the full clip is here and ARMYs will want to play it on loop forever.

Ever since "Dynamite" released on Aug. 21, it's been breaking record after record. Its music video reached 101.1 million views in a single day, making it YouTube's most-viewed video in 24 hours. The song also became BTS' first single to debut at No. 1 on the Billboard Hot 100 and is BTS' first-ever track released completely in English.

BTS performed "Dynamite" at the 2020 VMAs, America's Got Talent, and Today, but fans have never seen a performance quite like the one in Fortnite. On Sept. 25, fans logged into Fortnite to see BTS' "Dynamite" choreography video premiere inside the video game's Party Royale’s Main Stage, which is a social space where players can get together with friends to catch concerts, watch movies, or just hang out.

"We’re always looking to partner with talented artists who are interested in pushing boundaries and finding innovative ways to reach fans," said Nate Nanzer, Head of Global Partnerships at Epic Games. "BTS is not only incredibly popular worldwide, but their talent, creativity, and forward-thinking made them a perfect match. We’re honored to host their premiere."

In the new music video, the boys stand in front of a basketball court with a pastel, multi-colored background. Jungkook's back is facing the camera, while the rest of the band members begin dispersing as the camera zooms in on Jungkook singing. During his solo, Jungkook dances some solo choreography with some slides and a fun kick. Then, as soon as he sings, "Ding dong call me on my phone," the boys begin to make their way back, bopping along to the upbeat tune. Jungkook dances to the back as RM and J-Hope take center stage to sing the next portion of the song, one of the many times the boys shift their positions in the video.

As they build up the pre-chorus, RM, Jin, Suga, J-Hope, Jimin, V, and Jungkook dance together and their moves become a mix of amazing solos and synchronized, fluid movements that borrow from hip-hop roots with some disco vibes.

When the chorus starts again, the background changes to the outside of a disco club. To match, the BTS members are wearing some retro-inspired garb. A combo of slick movements eventually lead the boys to a circular, futuristic stage as they bop out the last few moments of the song. They end in a pose similar to how they started, but with each of them looking straight ahead. Basically, the video is full of celebratory choreography that makes it hard not to dance along.

Watch the "Dynamite" choreography video below.

Another fun feature BTS released on Fortnite is the opportunity to purchase the "BTS Dynamite Pack." The emotes will cost 800 V-bucks and will let fans show off some moves inspired by the group. Fortnite is available as a free download on PlayStation 4, Xbox One, Switch, PC, and Android.

Here's to hoping BTS does more surprise collaborations, because ARMYs are here for it.

More like this
These Tweets About BTS' 'Bang Bang Con 2021' Sum Up The Epic Performance
By Cianna Garrison
Is Saweetie's "See Saw" About Quavo? The Lyrics Are Brutal
By Corinne Sullivan
The 'Glee' Cast's Tribute To Naya Rivera At The 2021 GLAAD Media Awards Was So Moving
By Abby Monteil
Stay up to date